This week marks one year since GE filed a patent lawsuit against its main rival in the U.S. wind turbine industry, the Danish company Vestas A/S. In the past year, GE has modified its patent infringement allegations; Vestas has denied infringement, alleged inequitable conduct by GE when obtaining the patents, and counter-sued GE for infringing Vestas’ patents; and both parties have filed challenges to each other’s asserted patents with the Patent Trial and Appeal Board (see here and here). The litigation in federal court was also recently put on hold to await the outcome of those challenges at the PTAB.

A recent review of the four patents at issue in the case (two owned by GE, two by Vestas) reveals that these patents are in a common technological field that is dominated by GE and Vestas. This is perhaps not surprising: with GE and Vestas reportedly controlling more than 80% of the U.S. wind turbine market, it might be expected that they would also dominate a technological space that is critical to the wind turbine industry.

Every patent application is assigned a “classification code” that identifies the relevant technological field of the application. Classification codes can be used to group patents and assign them to patent examiners with expertise in the relevant field. Each of the four patents at issue between GE and Vestas is assigned the International Classification Code H02P. [Note 1]. This classification identifies the patented inventions as belonging to the technological field of “control or regulation of electric motors, electric generators, or dynamo-electric converters; controlling transformers, reactors or choke coils.”

A general search for patents in this classification shows that GE is the 3rd-ranked patent owner in this technological field, behind only the global automotive components manufacturer Denso Corporation and electronic products manufacturer Mitsubishi Electric Corporation. [Note 2]. Vestas ranks 26th on the overall list of patent owners in H02P. However, filtering the H02P classification for patents specifically directed to the control of wind turbine generators (as opposed to all electrical generators) reveals that GE and Vestas are the dominant parties in this patent space: 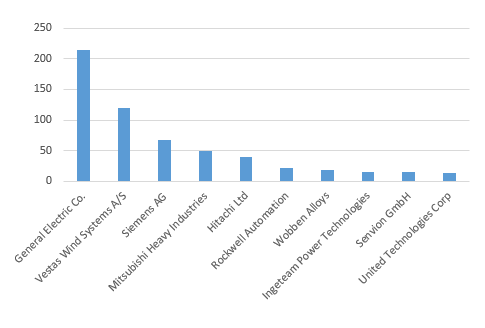 Although some patents in this technological field are based on applications filed in the early 2000’s, companies like GE and Vestas began filing in earnest only in the last 8-10 years: 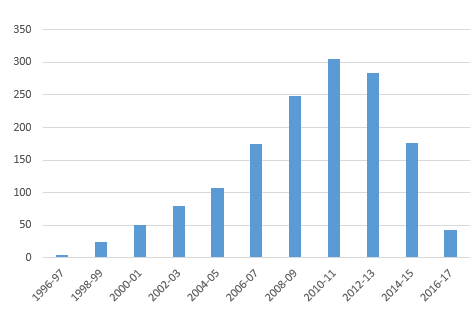 It should be noted that GE probably did not select this technological field for its litigation with Vestas based on GE’s strength in the patent space. Rather, the asserted patents were more likely chosen for their pedigree: these same patents were used against Mitsubishi Heavy Industries in an earlier lawsuit that resulted in GE being awarded $169 million in damages. The parties later settled the case, with Mitsubishi reportedly agreeing to largely withdraw from the U.S. wind turbine market. Should GE achieve a similar result here, it would be positioned improve upon its already strong market share.