Pros and cons of the unitary patent and Unified Patent Court

Pros and cons of the unitary patent

A unitary patent (UP) will be a single patent right, having unitary effect across up to 24 European Union member states. Specifically, a UP will take effect in all states that are:

A complete list of the countries that have signed the UPC Agreement and their ratification status is available here: http://dycip.com/upc-countries. Once Germany ratifies, the countries in which a UP will have effect are Austria, Belgium, Bulgaria, Denmark, Estonia, Finland, France, Germany, Italy, Latvia, Lithuania, Luxembourg, Malta, Netherlands, Portugal, Sweden and Slovenia.

There are a number of benefits and drawbacks of unitary patents which need to be considered when deciding whether or not to request unitary effect. This article will discuss these in more detail. If you have any further questions, please do not hesitate to contact us.

The decision of whether or not to obtain a unitary patent will need to be made on a case-by-case basis. There will need to be a balancing of risk and benefit including an assessment of cost-effectiveness. The following decision tree may help when deciding whether or not to request unitary effect during the transitional period (at least seven years from the start of the UPC) for a particular case. However, if you would like any further assistance or advice or a more detailed comparison of costs, please do not hesitate to contact us. 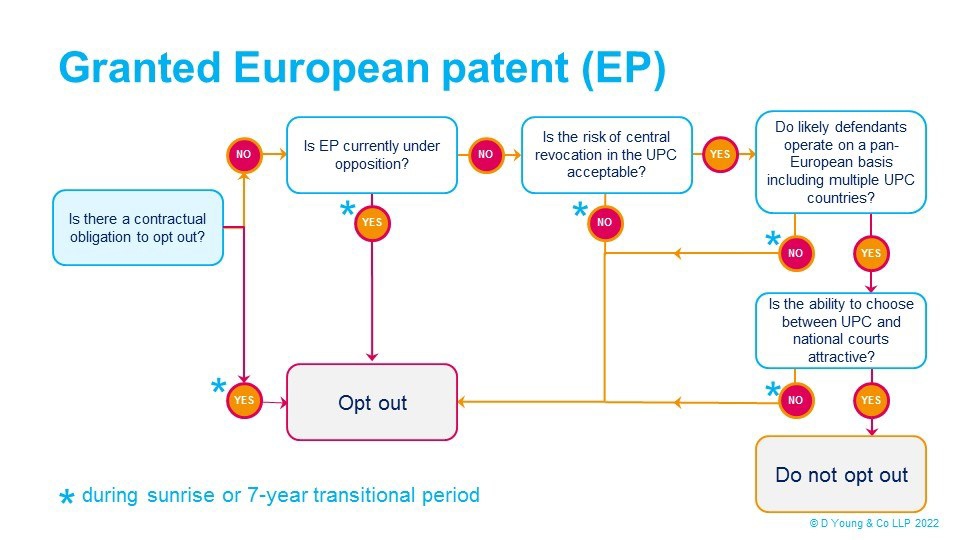 Pros and cons of the Unified Patent Court

The Unified Patent Court (UPC) is a new, international court for patent litigation in Europe for states which are both members of the European Patent Convention and member states of the UPC Agreement. It is a single court, comprising both first and second instances, with multiple locations.

The UPC will have jurisdiction over “bundle” European patents unless an “opt-out” is filed. There are many benefits of the UPC (supporting a decision not to opt-out) as well as drawbacks and we present these in detail below If you have any further questions, please do not hesitate to contact us. It will not be possible to opt-out UPs from the jurisdiction of the UPC.

Benefits of the UPC and not opting-out

Drawbacks of UPC and reasons to opt-out

The decision of whether or not to opt out from the jurisdiction of the UPC will need to be made on a case-by-case basis. The following decision tree may help when deciding whether or not to request an opt-out during the transitional period for a particular case. However, if you would like any further assistance or advice or a more detailed comparison of costs, please do not hesitate to contact us. 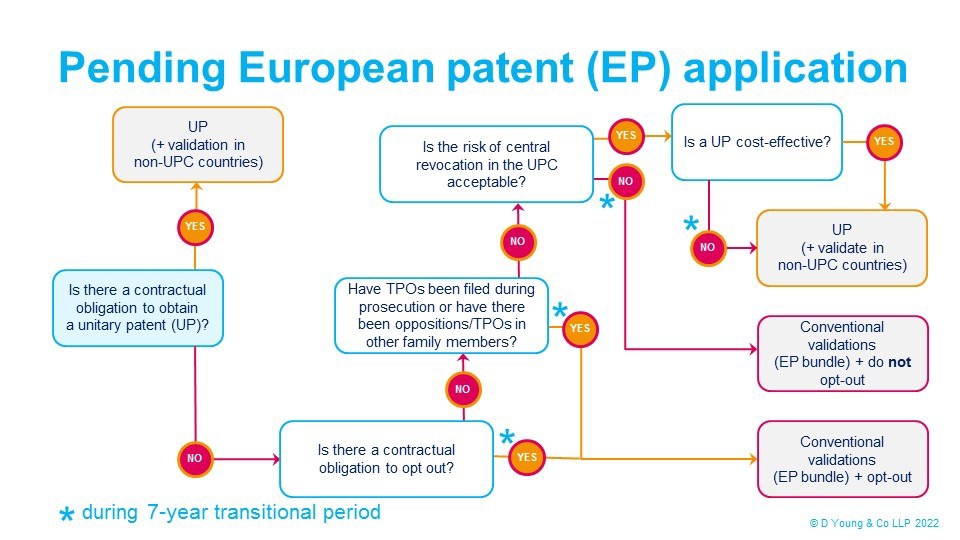 Validation for the common combination of DE, FR, & GB is roughly half the cost of validation of the UP for a short patent specification (for example, 10,000 words), and typically one tenth of the cost for a long specification (for example, 35,000 words). However official fees among additional states can vary significantly, and for states outside the London Agreement requiring a full translation, the costs can increase further. Hence adding to the above national validations a popular state such as Spain, Italy or Austria can result in total validation costs 50% greater than UP, whilst validating in eight of the more popular states can cost two or three times as much to validate. However, it should be noted that several such states are not in the UP scheme, including GB, ES and TR, and hence would need validating in parallel in any event.

Some typical validation figures are given below for a long specification.

Some lifetime renewal costs are given below as a percentage relative to the cost of renewing for DE, FR, and GB - which is currently both the cheapest and most common validation pattern in Europe, and covers states representing more than half of Europe’s GDP.

It can be seen that the unitary patent costs roughly equivalent to four average renewal fees. Hence as noted, for applicants who regularly validate in four or more states for the full lifetime of their patent, the UP may be cost effective for renewals. Meanwhile if an applicant regularly drops states to manage costs, it is possible for the UP to become significantly more expensive in later years.