The Department of City Planning ("DCP") is considering rezoning 56 blocks in the SoHo and NoHo neighborhoods to change existing restrictions on residential use, ground-floor retail, and fitness uses, as well as to increase the allowable density in the area.

What should I know about the rezoning?

On October 28, 2020, DCP released a Draft Scope of Work for an Environmental Impact Statement (the "Scope of Work") for zoning map amendments and zoning text amendments for the SoHo/NoHo area.

As outlined in the Scope of Work, DCP plans to advance a rezoning application that would establish a new Special District to include updated zoning regulations for the area. The regulations would vary across different "subdistricts" that are to be established. DCP refers to this proposal as the "SoHo/NoHo Neighborhood Plan."

The proposal would eliminate the existing prohibition on ground-floor retail and restaurant use, as well as allow fitness uses (physical culture establishments) as-of-right.

The new use regulations would also permit residential uses in the new district not limited by the current requirements allowing only artists-in-residence. New housing would require the inclusion of permanently affordable housing in accordance with the City's Mandatory Inclusionary Housing program. Existing residences designated as "Joint Living-Work Quarters for Artists" (or otherwise permitted under the New York State Loft Law) would remain or could be converted to standard residences (subject to certain requirements to be established by the rezoning).

In order to maintain the mixed-use character of SoHo/NoHo, a pre-condition to introducing residential use on zoning lots with existing buildings above a certain size would be to preserve or replace the existing non-residential floor area. The details of these requirements have not yet been released.

The rezoning would retain the current mixed-use zoning and increase the allowable density in the area, with residential FARs ranging from 9.7 to 12.0 in certain subdistricts,1 up from the existing maximum FAR of 5.0, or 6.5 with community facility use, in most of SoHo/NoHo.

Proposed new height and setback regulations would establish contextual building envelopes and height limits, varying across the different subdistricts. We note that approximately 80 percent of the proposed rezoning area is located within designated historic districts, and would continue to be subject to Landmarks Preservation Commission review.

The boundaries of the proposed Special District and its subdistricts are shown in the map and table below. 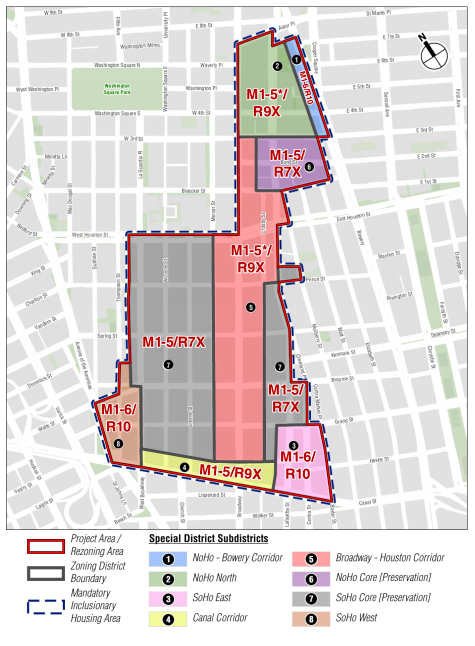 Potential Use and Floor Area Regulations (published in the October 28, 2020 Draft Scope of Work)

It is anticipated that the rezoning application will commence the approximately seven-month public review process in the spring of 2021, at which time the full text of the proposed zoning regulations will be released.