Land Tax Amendments - Are you prepared?

The South Australian Government has defiantly issued its Land Tax (Miscellaneous) Amendment Bill 2019 (Bill) for consultation manifesting a clear intent on the part of the Government to shut what some members of the Government have labelled “loopholes”, alter the way land tax is aggregated and introduce new bases for taxing certain types of trusts.

The South Australian Government has defiantly issued its Land Tax (Miscellaneous) Amendment Bill 2019 (Bill) for consultation manifesting a clear intent on the part of the Government to shut what some members of the Government have labelled “loopholes”, alter the way land tax is aggregated and introduce new bases for taxing certain types of trusts.

The timing of the Bill has been criticised by property, construction, business and investment groups on the basis that it coincides with the implementation of a State wide revaluation which seemingly will result in marked increases to site values culminating in a significant revenue grab in favour of the Government.

To put this in context, Colliers International has recently undertaken analysis of the impact of the revaluation and has advised that early reports from the first stage of the revaluation process (which came into effect on 1 July 2019), and included the local government assessments of Unley, Walkerville and the Adelaide Plains, indicates site values have increased by up to 40%. This demonstrates that the Valuer General’s assessments of site values are likely to markedly increase from historically conservative levels.

The Adelaide CBD is scheduled for the next round of reviews with newly assessed site and capital values to be released for use in the 2020/21 financial year.

The revaluation overlayed with a tightening to aggregation is likely to result in significant increases in land tax for many owners with multiple holdings. Many stakeholders believe this will spark a property sell off and discourage investment in the State, damaging an industry which is the driving force behind our economy.

Treasurer Lucas has indicated that the total tax to be derived from the new measures will rise to $86M, up from his $40M estimate made in June. The material discrepancies in forecast revenue, lack of consultation and limited financial and economic analysis by the Government since the release of its budget have been the subject of much criticism. The Treasurer has announced in Parliament that the Government will not negotiate on changes to aggregation and that “[t]he nature of the consultation will be in relation to the technical detail of the drafting of the bill” ruling out any scope for wholesale changes to be made to the Bill.

Policy pundits remain hard at work with the Property Council of Australia, Business SA and Urban Development Institute of South Australia continuing their strong efforts to fight for the complete abolition of the aggregation proposal. They argue that the reform when coupled with the comprehensive revaluation process is damaging confidence in the property sector as evidenced by the Business SA / William Buck June quarter survey of business expectations which revealed a confidence fall to 84.4 points (down from 116.4 in December).

In view of the Government’s hard line, it is imperative that property owners understand the proposed amendments and implement the most effective ownership structure(s).

The amendments to the Act are proposed to come into force from 1 July 2020.

The top land tax rate has been reduced to 2.4% (which is still higher than VIC and NSW but lower than WA and QLD). The Government has also indicated that the tax free threshold will increase to $450,000. The proposed rate structure with respect to trust and non-trust structures is as set out below: 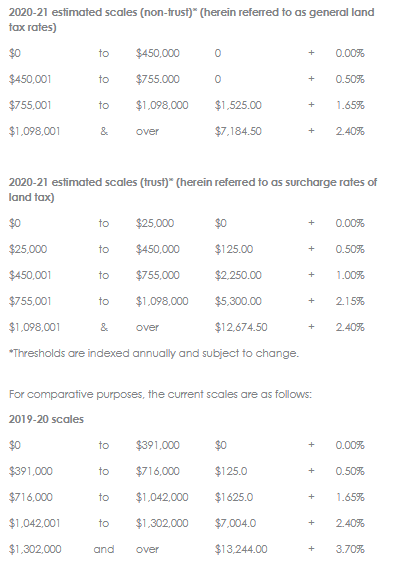 There are provisions in the Bill which are designed to group “related corporations”. Companies will be related where a person or group of persons (with the term “person” to include a company):

The aggregation principles also aggregate an owner’s partial or indirect interest in land, rather than only aggregating properties held in a group ownership structure. The land tax assessment will be calculated on an investor’s indirect or partial interest in the land as well as land wholly owned by the investor.

With respect to land owned by unit trusts, the Bill provides that:

Discretionary trusts will not be aggregated. However, land held by trustees of discretionary trusts will be subject to surcharge rates of land tax unless the trustee provides written notice to the Commissioner nominating a designated beneficiary as the owner of existing land held in the trust for the purposes of the Act. Only one beneficiary may be nominated and he/she must be a natural person above the age of 18 on the “prescribed day” (being the day on which the draft legislation is introduced to the House of Assembly). Nomination does not result in the nominated beneficiary having any interest in or entitlements in respect of the property different from those enjoyed prior to the nomination.

The nomination must be accompanied by a statutory declaration from the nominated beneficiary and must be made no later than 30 June 2020. Where a nomination is made:

Superannuation trusts and other specific trusts (including charitable trusts and deceased estates) will not be required to pay the trust surcharges and are excluded from the new regime.

Taxpayers will also need to address the following:

A trustee of a fixed trust or unit trust which lodges a notice identifying the beneficial interests in land and subsequently withdraws such notice will be precluded from lodging another notice with the Commissioner in relation to the trust. Upon the withdrawal of the notice, the relevant trust will forfeit the right to have the general land tax rates apply to the relevant trust. On that basis, the decision to issue and/or withdraw a notification should be the subject of rigorous analysis and diligent decision making.

The proposed reforms will in most cases be detrimental to investors with multiple land holdings. To put this into perspective, we have used the example of Trevor and applied the background facts to various ownership structures.

Trevor is a sole trader plumber who has saved hard over the course of his work life. Trevor has managed to put together a modest residential property portfolio here in SA made up of six properties. The land value of each property is $500,000. At the moment he pays $545 land tax on each property as he has used different forms of ownership for each property and therefore is not aggregated – this gives rise to a total land tax liability of $3,270 for this financial year.

If Trevor owns the 6 properties in companies which are controlled by Trevor, Trevor will be subject to the principles of aggregation and consequently his companies will be required to pay a total of $52,832.47 under the new regime.

Trevor is likely to have acquired his properties in discretionary trusts which until now has been a prudent structuring method for land tax purposes and from a CGT perspective. Applying the new (assuming there is no nomination of a designated beneficiary)

The above examples illustrate the benefit in nominating beneficiaries in the case of discretionary trusts to reduce land tax. However, it is clear that Trevor will be worse off if he receives an assessment based on surcharge rates of land tax or has a group of related companies owning the properties.

Although the Government has finally relented to pressure and reduced the top rate from 3.7% to 2.4% from 1 July 2020, the top rate kicks in at a threshold generally much earlier (i.e. lower) that other States. The Bill still presents a heavy burden for the investment community and a dampener to business and investment confidence in the State.

The land tax rates particularly in view of the relatively low thresholds, remain very uncompetitive when compared to other States and given the higher reliance in South Australia on net income returns on properties (as distinct from the significant capital growth which occurs in the eastern States) is a major anti‑investment tax that will drive investment away from South Australia.

We would prefer to see: