The intersection of artificial intelligence (AI) and intellectual property invokes fascinating theoretical questions. For example, can a machine own an invention? Or be liable for the consequences of its actions? However, with these questions come significant practical issues that businesses, legal practitioners, and governments need to address proactively. Clear legal guidelines are needed to help guide companies as AI expands into every aspect of our daily lives. Israel is embracing the challenge.

Israel has proven to be a preeminent global hotspot for AI innovation. According to data presented in a recent European Union report, Israel leads the world in the amount of AI players per GDP (with 2.5 AI players per 1bn€ GDP) over the US, China, and EU member states (which enjoy around 0.5 AI players per 1bn€ GDP). Tech giants have been establishing Israel-based AI research and development centers in droves, scooping up the best part of the local high-tech talent. These Israel-based R&D centers are producing some of the most technologically advanced AI innovations, like Google’s Duplex, IBM’s Debater, and Microsoft’s Healthcare Bot. Israel was already one of the biggest markets for venture capital in the world. Now those VC funds are increasingly focused on AI technologies. In 2018 alone, Israel-based AI companies raised over $2.25 billion in venture capital, more than triple the $516 million raised in 2014. All of this bleeding edge innovation begs the question, what legal protections are available for the underlying inventions under Israel Patent Law?[1] 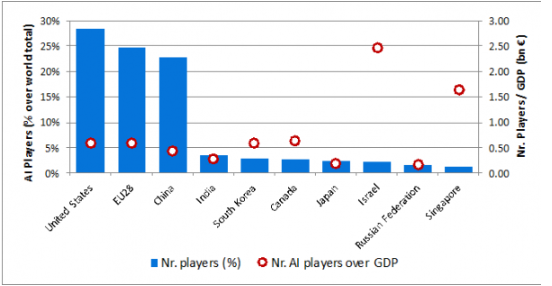 As in other territories, the Israeli legislature and relevant agencies have not yet fully established how AI inventions are to be regulated. However, considerable efforts are being made to establish a coherent governmental program and policy on AI. The PM’s Office has formed a specially-commissioned task force, and it is working on publishing its recommendations. In Israel, ethical and institutional approaches will likely determine how AI technology will be governed. According to some unofficial presentations, an ethics by design approach may be adopted similar to the approach discussed in the European Union reports.

Until there is a definitive regulatory approach in each jurisdiction, every patent system worldwide must navigate uncertain and sometimes uneven regulatory responses. As noted, these uncertainties have not slowed investment and invention, which creates a practical issue dominating any regulatory discussion. What kind of intellectual property protection should be granted to inventions applying AI capabilities?

In this respect, it seems patent offices are taking a somewhat technical approach and considering AI elements of an invention as any other software element, as seen in Europe, the US, and Israel itself. For example, new guidelines issued by the European Patent Office (“EPO”) initially create a seemingly insurmountable threshold for patentability, but upon closer inspection, actually seem to follow previous guidelines for patentability of software claims while stressing that the AI inventions must have an application for a specific field of technology. For more information on the new guidelines, click here.

Similarly, the U.S. Patent and Trademark Office (“USPTO”) treats AI inventions like software or computer-implemented inventions. AI applications in the US often rely on algorithms and mathematical models, which have always struggled to find their place in the US patent system. 35 U.S.C. § 101 explains that “[w]hoever invents or discovers any new and useful process, machine, manufacture, or composition of matter, or any new and useful improvement thereof, may obtain a patent.” However, an important judicial exception is also understood to apply in §101. Laws of nature, natural phenomena, and abstract ideas are not patentable. AI applications (and software applications generally) have always struggled to show that any claimed subject matter is not merely an abstract idea. In the now infamous Alice v. CLS Bank decision, the U.S. Supreme Court held that a “patent-eligible” claim to an invention cannot be “directed to an abstract idea.” However, the Court did not provide much in the way of guidance as to what an “abstract idea” actually is. The Court provided a two-step framework for analyzing claims allegedly directed to an abstract idea, known generally as the Alice/Mayo test. A claim is unpatentable if it is directed to a patent-ineligible concept, e.g., a law of nature, natural phenomenon, or abstract idea, and if the particular elements of the claim do not add enough to transform the nature of the claim into a patent-eligible application. After Alice, there was a concern that any software claim was doomed.

In the following years, lower courts struggled to apply Alice’s two-step process. Some decisions helped to provide clarity and calm fears. For example, the 2016 Enfish v. Microsoft decision allowed the Federal Circuit to clarify that “[s]oftware can make non-abstract improvements to computer technology just as hardware improvements can.” As such, it became important to provide details in any AI application about the benefits or “non-abstract improvements” provided by a particular AI approach to solving a problem. However, in the same year, the Federal Circuit found software claims to be unpatentable in Electric Power Group, LLC v. Alstom S.A., noting that “[n]othing in the claims, understood in light of the specification, requires anything other than off-the-shelf, conventional computer, network, and display technology for gathering, sending, and presenting the desired information.” The Court distinguished over Enfish, noting that Enfish focused on the difference “between, on one hand, computer-functionality improvements and, on the other, uses of existing computers as tools in aid of processes focused on ‘abstract ideas.’” In Electric Power Group, the Court argued that the focus of the claims was “on collecting information, analyzing it, and displaying certain results of the collection and analysis,” and nothing more. The Federal Circuit further clarified in McRO v. Bandai Namco that claiming “a specific means or method that improves technology” can rise to the level of patentability as opposed to simply claiming “a result or effect that itself is the abstract idea and merely invoke generic processes and machinery.” Under these rulings, it was very difficult for applicants to show that a claim was not directed to an abstract idea. Instead, patentability of AI applications almost always rested on whether particular elements of the claim added enough to transform an abstract idea into a patent-eligible application. Thus, it was clear that AI applications were not dead in the US. But whether particular claims in a patent would survive whenever the Federal Circuit got involved was anyone’s guess.

The practice at the Israel Patent Office (“ILPO”) compares favorably to the EPO and USPTO approaches, and the ILPO continues to proactively provide even greater guidance to patent practitioners and businesses to enhance clarity on the issue. In general, AI implemented inventions are considered by the ILPO as any software or computer-implemented inventions for purposes of patentable subject matter. This practice was reflected in a recent public information session with the Israel Commissioner of Patents and the ITC examination teams. The ILPO approach to software and computer implemented inventions is outlined in the watershed 2012 Appendix B of the Patent Examining Procedures. Section 3 of Israel Patent Law provides that, “[a]n invention, whether a product or a process in any field of technology, which is new, useful, and susceptible to industrial application, and which involves inventive step - is eligible for patentability.” The guidance provided by ILPO in Appendix B makes clear that the terms “field of technology” and “process” are critical to the examination of software-based applications.

Appendix B establishes that “field of technology” requires a concrete technological character. This language of Section 3 to the Israel Patent Law resembles the language of Article 52(1) of the European Patent Convention and, consequently, the ILPO adopted the “technical effect” test used in the EU jurisprudence. Section 7.4. of Appendix B provides guidance on the implementation of the “technical effect” test and establishes that where an invention modifies or adds to the physical features of a computer system, beyond its mundane operation as an integrated computer system, and that modification is evident when carrying out the claimed invention, then the invention is likely to meet the requirement of a concrete technological character. Further, inventions will likely meet the technological character requirement if carrying out the claimed invention causes the computer to operate in a new manner, such as improving the computer’s performance (such as speed, reliable performance, or improved utilization of data storage capacity), or if interoperability is created between components of the computer system in a manner that did not exist beforehand.

While the guidelines in Appendix B are far from lenient, they do provide a much higher degree of clarity and certainty as to what may be patentable subject matter at the ILPO. No court has, as of yet, interpreted any of Appendix B and no specific published matter has yet been concretely litigated. The Commissioner of Patents has issued few unilateral decisions on the basis of the Appendix B guidelines in matters of appeal on examiners’ decisions,[2] and these decisions supplement the bank of examples already included in Appendix B and together provide indications as to how the guidelines are to be implemented. The examples within Appendix B, specifically Example 9 “Classification of Images” and Example 11 “Analysis of Statistical Data,” will likely be relevant to many AI based patent applications.

It seems clear that, at this point, AI implemented inventions will be reviewed by the IPLO under the same rubric as software or computer-implemented inventions. To this extent, the Appendix B guidelines are particularly helpful and clear. However, there are several components of the patentability of AI inventions that remain, as of yet, unclear. For example, the IPLO has not yet publicly established a practice or approach as to questions of enablement, how questions as to novelty and obviousness will be considered in this field of technology, or whether AI components of an invention must be explained and transparent in an invention that has not been publicly divulged. The Israeli legislature, the Prime Minister’s task force on AI, and the various relevant regulators are developing approaches that may be determinative, though some developments may necessarily only be created in parallel with AI technological advancements.

Even taking these issues into consideration, however, Israel remains a leader in the field. The benefit the ILPO affords for first filing and expedited prosecution coupled with the evident rise of relevant patent applications means that Israel will be on the cutting edge of developments in AI patent law and practice. As with most IP issues, companies must take an integrated global approach to securing their AI inventions or risk filings in one location that invalidate protections in other jurisdictions. A sophisticated, multinational IP team versed in the best practices across key AI hotspots like Israel, Europe, the U.S., and China will help ensure efficient and standardized filings.