Missouri’s Right-to-Work Bill: Not as Soon as the Legislature Intended but Perhaps Sooner Than the Unions Want

In February of 2017, Missouri Governor Eric Greitens signed Senate Bill 19, which was intended to make Missouri the 28th right-to-work state in the United States. Senate Bill 19 was scheduled to take effect on August 28, 2017. In response, unions mounted petition drives and filed signatures in support of Referendum Petition 2018-R002 with the Missouri secretary of state. To be valid, this petition was required to have been signed by at least five percent of the registered voters in six of Missouri’s eight congressional districts. On November 22, 2017, Missouri Secretary of State Jay Ashcroft issued a certificate of sufficiency declaring that Referendum Petition 2018-R002 had received the requisite number of signatures and that Missouri voters would decide whether to enact a right-to-work law in November 2018 (unless a different date was designated by the Missouri General Assembly). Right to work will become the law of Missouri only if ratified by a majority of the Missouri electorate, as is required by Article III, Section 52(b) of the Missouri Constitution.

On May 17, 2018, the Missouri General Assembly designated a different date for the vote on the right-to-work referendum—a decision that is permitted by the Missouri Constitution. Due to the passage of Senate Concurrent Resolution (SCR) 49, voters will decide the fate of the right-to-work bill during the primary election on Tuesday, August 7, 2018. If the electorate passes right-to-work, Senate Bill 19 will become effective on August 8, 2018, nearly one year later than the legislature intended.

The Numbers and Implications

The data released by Missouri Secretary of State Jay Ashcroft regarding the petition signatures may provide insight into the Missouri electorate’s thoughts on the right-to-work law. 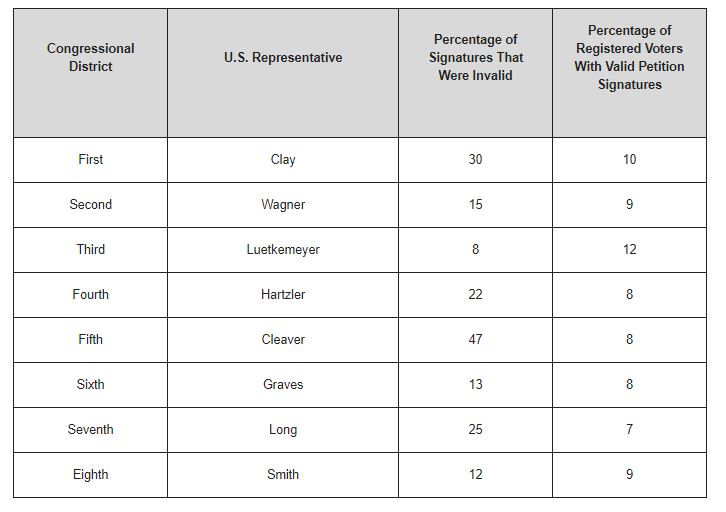 The data is interesting because a large percentage of the signatures submitted by the unions for Missouri’s Fifth and First Congressional Districts were invalid—approximately 47 percent and 30 percent, respectively. Additionally, in four of the eight districts (the fourth, fifth, sixth, and seventh), after discarding invalid signatures, the unions exceeded the required threshold of five percent by three or fewer percentage points. These numbers paint an uncertain picture of unions’ support in their fight against the right-to-work bill.

While the unions seek to bolster support through their campaign against right-to-work laws, the general assembly’s passage of SCR 49 carries two implications:

Earlier implementation of the right-to-work bill potentially benefits any employer that reaches a collective bargaining agreement between August 2018 and November 2018. The law would not impact contracts that are already in place when the right-to-work bill takes effect, but it would prohibit union security in subsequent contracts. Consequently, Missouri unions may now push hard to conclude any open contract negotiations prior to August 2018.

On August 7, 2018, Missouri’s voters will be presented with this ballot question for a vote on the right-to-work bill:

Do the people of the state of Missouri want to adopt Senate Bill 19 ("Right-to-Work") as passed by the general assembly in 2017, which prohibits as a condition of employment the forced membership in a labor organization (union) or forced payments of dues in full or pro-rata (fair-share); make any activity which violates employees' rights illegal and ineffective; allow legal remedies for anyone injured as a result of another person violating or threatening to violate employees' rights; and which shall not apply to union agreements entered into before the effective date of Senate Bill 19?

State and local government entities expect no costs or savings.

The fight over right-to-work laws in Missouri is far from over. Even if voters approve the right-to-work bill in August of 2018, the unions may then seek an amendment to the Missouri Constitution prohibiting right-to-work laws. The unions’ campaign to add a constitutional amendment ballot measure took a back seat to the referendum effort in 2017 and 2018, but it may be revived in the future. Meanwhile, the Missouri House of Representatives passed a bill (HJR 79) on May 14, 2018, seeking to add a pro- right-to-work constitutional amendment vote to the November 2018 ballot, but the legislative session ended before the state senate could vote on that measure.

In the upcoming weeks and months, we will likely see the law’s supporters and opponents clash in Jefferson City, in the courts, and in counties all over Missouri. The state’s voters will certainly see the fight play out in local advertising campaigns. Despite this uncertainty, before 2018 ends, the voters themselves will decide whether the state’s workers should be compelled to pay union dues in order to keep their jobs.