On 19 February 2018 the Competition and Markets Authority (CMA) announced the launch of a new campaign to crack down on cartels and encourage more people to blow the whistle. The campaign, which leads with the tagline “When it comes to cartels, be safe not sorry”, encourages anyone who has witnessed or been involved in a cartel to “tell us about it and help us make markets fairer”. The CMA states that this is part of a ramping up of its enforcement activity, and comes after the government increased its funding for this work.

The “Safe not Sorry” campaign

The campaign page provides a series of videos, short guides and case studies explaining what cartels are and how people can report them. The CMA urges witnesses to report even minor information regarding suspected cartels using the dedicated telephone and email hotlines which were set up in 2017. The CMA encourages witnesses to come forward by pointing to its “specially trained officers” who can discuss any concerns, particularly anonymity, and by emphasising the availability of financial rewards of up to £100,000. The CMA also reminds people who have been involved in cartels themselves that if they come forward with information, they can receive significant reductions in fines and avoid being disqualified from running a company. If they are the first to come forward, they can receive total immunity from fines and criminal prosecution.

The campaign also features a short quiz intended to test whether businesses know enough about competition law to enable them to assess whether they might be at risk. The quiz includes the following questions: 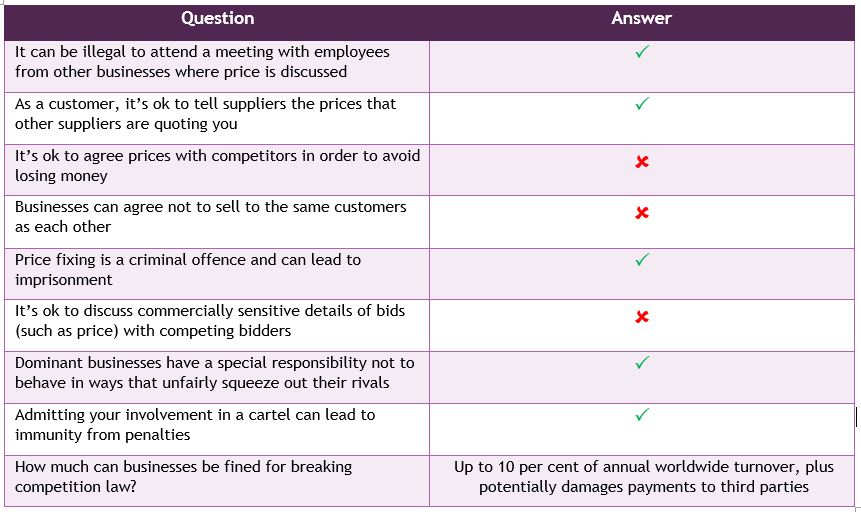 Three case studies are provided as real-life examples of cartels. These are (i) the Somerset estate agents cartel, where the estate agents were fined over £370,000 for fixing the minimum prices of their commission rates; (ii) the water tanks cartel, where firms were fined over £2.6 million for dividing up customers and fixing minimum prices for tanks used in large construction projects, such as schools and hospitals; and (iii) the cartel involving online sellers fixing prices, where a seller on Amazon marketplace was fined over £160,000 and a director was disqualified for agreeing to fix the prices of posters and frames with a competitor (who received immunity).

The campaign specifically targets sectors in which the CMA believes there is a greater risk of cartels. These sectors, including construction, manufacturing and business support services, are those which have either a history of cartels, or characteristics which make them vulnerable to cartel behaviour.

The campaign is backed by Public Concern at Work, an independent whistleblowing charity which provides confidential advice to workers who are unsure whether or how to raise a public interest concern.

This campaign follows a similar campaign, “Cracking down on Cartels”, which was launched by the CMA in March 2017. In that first digital campaign, the CMA also offered whistleblowers a reward of up to £100,000 while also promising anonymity to any witnesses who came forward. It was launched following research which found that less than a quarter of businesses said that they properly understood competition law. The success of the first campaign spurred the CMA to launch the “Safe not Sorry” campaign. The CMA reports that 2017 saw a 30 per cent increase in tip offs on cartels, while over the past two years the CMA has issued £151 million in fines following successful investigations into anti-competitive practices. The CMA is currently investigating 15 cases where competition law may have been infringed.

Another driver of the “Safe not Sorry” campaign is the £2.8 million additional funding per year granted to the CMA in the 2017 Autumn Budget. In the Budget, which was announced on 22 November 2017, the Chancellor of the Exchequer Philip Hammond held that driving stronger competition was a key part of the government’s plan to “build an economy fit for the future”. The Budget stated that the government “backs the [CMA], the UK’s internationally-respected competition authority, providing additional funding to stamp out anti-competitive practices”, and that the government was granting the extra funds so that the CMA can “take on more cases against companies that are acting unfairly” and “use more of the fines it collects to meet the legal costs of defending its decisions”. As regards Brexit, the Budget stated that “the government will ensure the UK has the robust and effective competition system it needs after the UK has left the EU”. The CMA reportedly said last week that it expects to receive extra government funding to deal with the likely significant rise in its workload after Brexit, including in relation to cartels.

It therefore seems that the CMA, buoyed by the apparent success of its previous media campaign and with the uncertainty surrounding the future competition law landscape in the UK in the run up to Brexit, is taking a particularly active enforcement approach towards cartels, and that this approach is backed financially by the government.

Slaughter and May - Philippe Chappatte, John Boyce and Natalie Yeung
﻿
Back Forward