Indian footwear market is estimated to be US $ 15.5 billion by 2022. With tremendous growth potential, the sector is witnessing an unprecedented investment and launch of footwear directed towards all segments of society. As disposable income rises among Indian consumers, they move up the value chain, demanding products for different uses and occasions.

The post discusses a Design infringement and passing off action brought by Relaxo Footwears Limited (Relaxo) before the Delhi High Court against the defendant, Aqualite Industries Pvt Limited (Aqualite). Relaxo seeks to restrain Aqualite from dealing in footwear (slippers), alleging they are imitating their designs and trade dress. The competing product images are reproduced below. 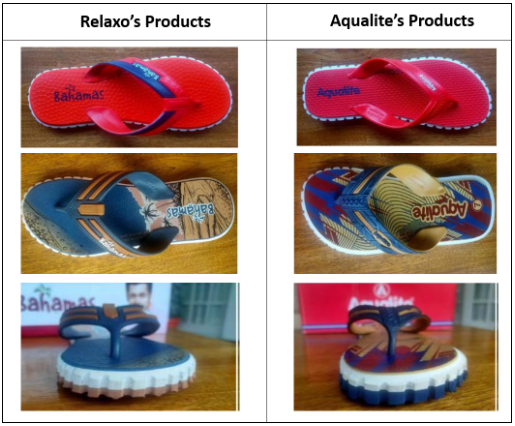 Relaxo in the suit contends:

The Court ruled, Relaxo has made a prima facie case, and the balance of convenience is in their favour. The Court thus, restrained Aqualite from using the registered designs or any other design deceptively similar to Relaxo.