Last week the Federal Government announced new visas for regional Australia which will be available from November 2019. It will also revise the definition of Regional Australia to include all of Australia except for the metropolitan areas of Sydney, Melbourne, Brisbane, Gold Coast, and Perth.

The new visas will be:

These visas are both provisional visas which may lead to the grant of a permanent visa if the holder satisfies certain conditions. A new permanent visa pathway – Permanent Residence (Skilled Regional) Visa will be available to holders of the above visas in November 2022.

We will provide more information about these visas as it becomes available.

An additional three Designated Area Migration Agreements have been announced for the following regions:

A Designated Area Migration Agreement is a formal agreement between the Australian Government and a specific regional area focussed on filling skills shortages in those specific areas which cannot be filled from the local labour market.

The Government last week announced the migration program planning levels for the 2019-2020 program year. The total places available will be capped at 160,000 which is a reduction of 30,000 from previous years. 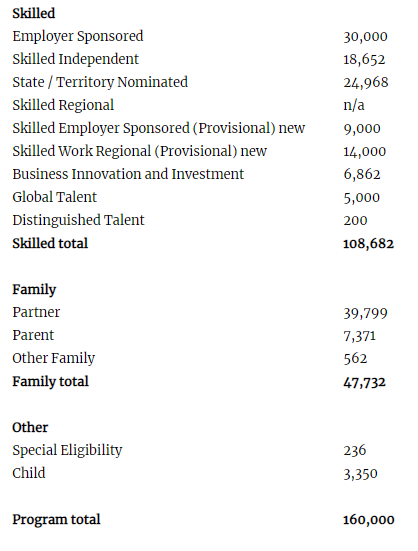