The Federal Court of Australia has for the first time protected Indigenous Australian artistic designs without relying on copyright or other intellectual property rights.

The Federal Court of Australia has applied the Australian Consumer Law to protect Indigenous Australian artistic designs by penalising a seller of souvenir boomerangs, didgeridoos, bullroarers and message stones with fake indigenous designs, authenticity and provenance, the sum of $2.3 million.

The decision is significant in that it establishes that the Australian Consumer Law can be used to protect against cultural appropriation. In this case, it was the cultural designs, images and symbols that were taken and were exploited for commercial benefit, causing widespread economic, social and cultural harms to Indigenous Australians.

Birubi Art, sourced the artefacts from Indonesia, where they were manufactured and decorated with Australian Aboriginal designs such as kangaroos, emus, crocodiles, fish and dot art by non-Aboriginal people. An Aboriginal designer, Trisha Mason, had prepared artwork for some of the products, but did not supervise or paint any of the artefacts.

Birubi Art sold the artefacts to 244 retail outlets in Australia, which sold them to tourists as authentic Aboriginal Australian artefacts. Between July 2015 and November 2017, Birubi Art sold 50,000 boomerangs, bullroarers, didgeridoos and message stones to retailers.

The Court found that the artefacts, their labelling and their packaging gave the misleading impression that they were made in Australia and had been painted by an Australian Aboriginal person. See the images. 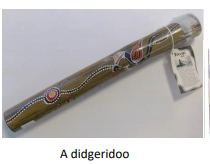 The Court assessed a civil penalty for contravention of the Australian Consumer Law. The main factors considered were:

The penalties were based on whether the misleading impression was “overwhelming” (or only a real risk of being misleading), the volume of sales, and the period of sales:

The total penalties were $2.3 million.

In its media release, the Australian Competition and Consumer Commission (ACCC) stated:

But the powers of the ACCC are limited because the existing consumer and copyright laws are inadequate to protect the traditional heritage and cultural expressions of Indigenous Australian against cultural appropriation. A legislative response is needed.

In December 2018, the Australian House of Representatives Standing Committee on Indigenous Affairs released a report - Report on the impact of inauthentic art and craft in the style of First Nations Peoples.

An extraordinary statistic that emerged from the evidence received is that 80% of the souvenirs sold in Australia purporting to represent First Nations cultures are in fact imitation products. These inauthentic items have no connection to First Nations peoples and are often cheaply made imports.

The Standing Committee made several recommendations. Some are:

A private member’s bill containing legislative effect for many of the recommendations awaits the consideration of Parliament.