Less than a week after the U.S. Securities and Exchange Commission ("SEC") rejected a proposed rule change to permit primary capital raising in direct listings, the New York Stock Exchange ("NYSE") submitted an updated proposal on December 11, 2019, which the NYSE subsequently amended on December 13, 2019. The NYSE's amended proposal is subject to SEC approval.

The current proposal largely tracks the substance of the NYSE's initial proposal, but would allow a private company seeking to raise capital through a direct listing to satisfy the NYSE's market value requirement by selling at least $100 million of stock (rather than the $250 million required in the initial rule).

The NYSE's December 13 amendment resolved an ambiguity in the previously submitted proposed text of the rule. As amended, the proposal clarifies that for every direct listing that includes a primary component where less than $100 million of primary shares are offered (regardless of whether the company's shares trade in a private placement market or not), the aggregate market value of publicly held shares must be $250 million.

Like its initial proposal, the NYSE's current proposal would address two of the most significant obstacles facing companies considering direct listings—the present inability to raise capital in a direct listing and the need to have at least 400 round lot holders upon listing. The removal of these obstacles would make direct listings an appealing and feasible alternative for a substantially broader group of private companies. However, the NYSE has not otherwise expanded the scope of its initial proposal and, even if the proposal is adopted, additional hurdles and limitations of direct listings would remain. Accordingly, whether a direct listing or a traditional initial public offering process is appropriate for a particular company will remain an important question, involving a nuanced evaluation of the tradeoffs, costs, and benefits of each approach. 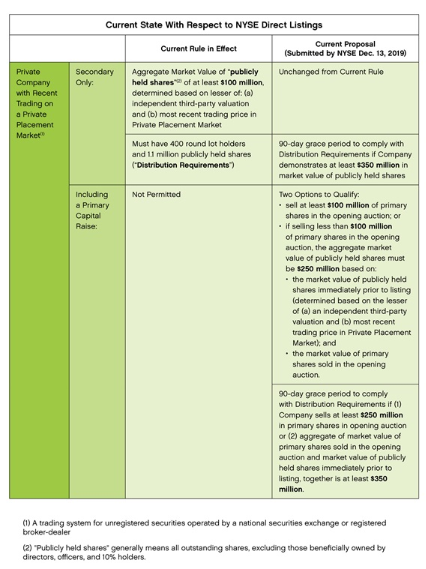