Continuing our series on biotechnology for #Bio2018, this post looks at the development of new gene editing and genetic engineering techniques – a key trend shaping the biotechnology industry.

New genome editing techniques, such as CRISPR/Cas9, have made editing genomic material cheap, efficient and accessible. These new techniques have opened up a plethora of opportunities for scientific progress previously considered decades away. For governments around the world, however, novel genome editing techniques present a regulatory challenge – governments must consider whether frameworks designed for traditional genetic engineering techniques remain suited to address newer techniques like CRISPR/Cas9, zinc finger nucleases (ZFNs) and transcription activator-like effector nucleases (TALENs).

Australia’s current regulatory system for gene technology comprises a patchwork of organisations administering an assortment of national regulations, guidelines and principles. As shown in the diagram below, this system provides mixed coverage depending on the end-use of the genetically modified material and the development stage of the application. Questions remain however and the application of laws regulating genetically modified organisms (GMOs) and genetically modified foods (GM foods) produced by, or involving, genome editing are uncertain. For example, are organisms modified by CRISPR/Cas9 ‘genetically modified organisms’ within the meaning of the legislation? This arguably depends on whether the edit to an organism’s genome introduces new genetic material or simply involves the deletion of a mutation.

The Australian Government is proactively considering these uncertainties and the suitability of existing regulatory systems as they relate to new genome editing techniques. In particular:

We will be watching developments in these areas with interest! 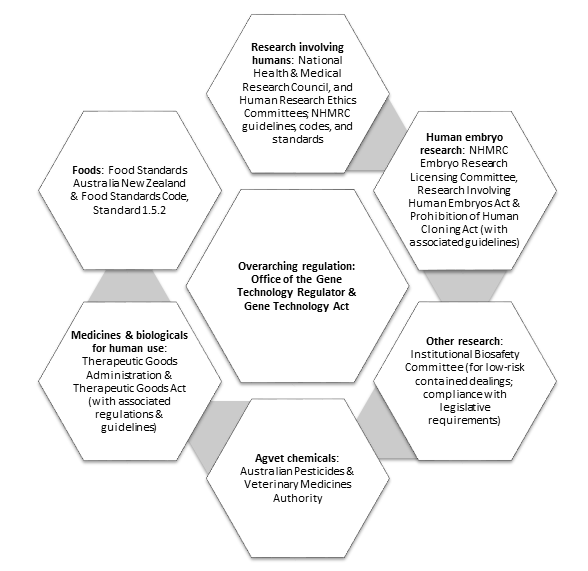