The case, which dates back to 2012, unfolds in two acts. First act: BMW alleged counterfeit against the DGT Wheels and Tires Ltd. (DGT). In 2014, the parties entered into a settlement agreement. Second act: following an interim injunction and search order rendered in 2018, BMW discovered that DGT Wheels and Tires Ltd. had returned to its harmful practices. Indeed, the latter was selling, particularly on eBay, counterfeit alloy wheels. This time, BMW decided to sue DGT before the British courts. The claimant also included Premier Alloy Wheels Ltd. into the proceedings for storing the disputed goods. 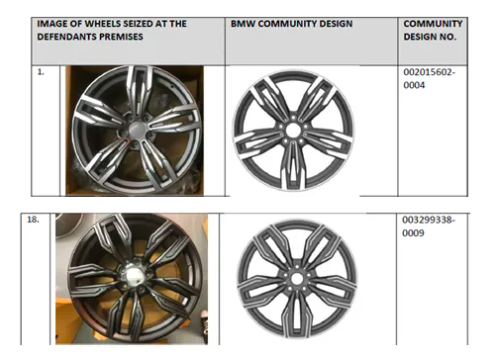 The judge, who compared, in particular, “the number and shape of the spokes, the shape of the central structure and various differences in the designs of the rims” (see para. 47), concluded that the alloy wheels were counterfeits.

Failure to comply with settlement agreements aimed at stopping intellectual property infringement is not that rare. Therefore, it seems reasonable to prolong the monitoring of previously identified counterfeiters.