Below is a summary of the proposals’ impacts on existing credits for energy-related incentives, including estimated effects on government revenue from the Joint Committee on Taxation (JCT). 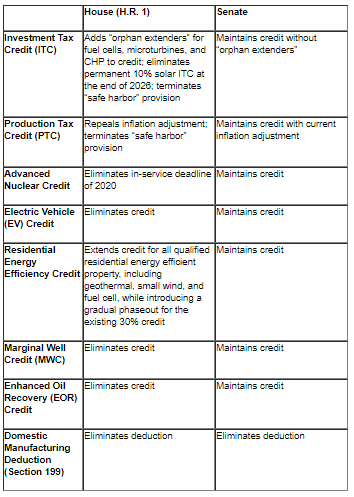 The Business Energy Investment Tax Credit (ITC) provides a credit of up to 30% of investment made in qualified solar, fuel cell, and wind technologies. It also provides a credit of up to 10% for geothermal, small wind turbines, microturbines, and combined heating and power (CHP) technologies. For fuel cells, microturbines and small wind turbines, maximum rebates under the ITC are capped.1 Until 2015, the ITC was often extended on an annual or bi-annual basis. In 2015, a bipartisan agreement was reached to extend the ITC with a gradual phasedown.

Under the phasedown agreement, solar producers are able to claim the full 30% through 2019. The solar credit is then incrementally reduced through 2022, at which point it continues permanently at 10%. The credit is also available now and permanently at 10% for geothermal. Large wind received a 30% credit in 2016, and the credit is scheduled to gradually phase out by 2020.

When the phasedown agreement was reached in 2015, there was also bipartisan intention that the phasedown provided for solar would also extend to fuel cells, microturbines, small wind, and CHP, but the final bill text left out these technologies. Under current law, the 30% credit afforded to these technologies expired at the end of 2016. These have become known as the “orphan extenders.”

H.R. 1 includes extensions for these “orphaned” technologies, allowing them to claim the ITC until 2022 with the same phaseout as the solar ITC. However, instead of allowing the 10% credit to continue permanently for solar and geothermal, H.R. 1 would terminate the ITC entirely by 2027. Under H.R. 1, the provision is also amended to require continuous construction until a facility comes online to qualify for the credit, disallowing investors to make “safe harbor” investments to qualify. This alteration would take effect for facilities as of November 2, 2017. The JCT estimates that the House’s proposal would reduce government revenues by $1.2 billion over 10 years.

The Senate’s proposal maintains the ITC as-written in current law.

The renewable electricity production tax credit (PTC) provides a per-kilowatt-hour (kWh) credit for electricity produced from a variety of sources for up to ten years after the facility begins operation. When the credit was initially conceived, it was set at $0.015/kWh in 1993 dollars with an inflation provision built in; in 2016, the credit was equal to $0.023/kWh for wind, closed-loop biomass, geothermal, and solar systems that did not claim the ITC. Renewable electricity produced via open-loop biomass, landfill gas, municipal solid waste, qualified hydroelectric, and marine and hydrokinetic sources were eligible for a $0.012/kWh credit in 2016.

H.R. 1 repeals the inflation adjustment for the wind production tax credit, reverting the credit back to $0.015/kWh. As with the ITC, the bill also ends the “safe harbor” provisions and require “continuous construction” on eligible investments. The modifications are expected to increase government revenues by $12.3 billion over ten years.

The House proposal’s alteration of this credit is considered particularly contentious in light of the bipartisan support for the 5-year phaseout agreement reached in 2015. Numerous Republican Senators, including Sen. Chuck Grassley (R-IA) who sits on the Senate Finance Committee, immediately announced their opposition to the House’s efforts to amend the existing framework.2

The Senate’s proposal maintains the PTC as-written in current law.

The Electric Vehicle Credit provides a credit of between $2,500 and $7,500 for individuals that purchase electric vehicles (EVs). The credit is available for the first 200,000 EVs sold by each manufacturer, then phases out for each manufacturer. No manufacturers have hit the phaseout yet, though three companies have surpassed 100,000 vehicle sales.3 The elimination of this credit is not scored individually, therefore its cost is unknown.

The House proposal eliminates this credit, while the Senate version maintains it as-written in current law.

The Residential Energy Efficiency Property Credit (Section 25D) allows taxpayers to claim a credit of 30% of the expenditures made for qualified solar, fuel cell, small wind, and geothermal property investments placed in service through 2016. The credit for solar electric property and solar water heating property credits are available for property placed into service by 2021. The credit for fuel cell property is capped at $1000/kWh of capacity.

Under H.R. 1, the credit is extended for all qualified residential property placed in service prior to 2022, but introduces a phaseout. The credit is reduced from 30% to 26% for 2020 and 22% for 2021. The JCT estimates the change would cost the government $1.1 billion over ten years.

Advanced nuclear facilities placed in service by 2020 are eligible for a credit of $0.018/kWh produced during the first 8 years of operation. The credit is capped at a maximum of 6,000 MW of national capacity allocated by the Secretary of the Treasury.

Current law states that production must be in-service by 2020 to qualify for credit, but H.R. 1 amends the provision to allow the Secretary of the Treasury to transfer unused credits after this deadline. H.R. 1 also amends the credit allocation process, allowing the transfer of credits from public entities to project partners. The JCT estimates the credit would cost the government $400 million over ten years.

The marginal well credit (MWC) incentivizes domestic production of crude oil and natural gas from marginal wells by providing a credit of up to $3-per-barrel-of-crude and $0.50-per-1,000-cubic-feet when the reference price for oil and natural gas dip below $18/ barrel or $2/ cubic foot, respectively. Since the incentive was enacted in 2004, the MWC has never been activated for oil. The IRS issued a notice on September 12, 2017 making the credit available for natural gas production in 2016 for the first time.4

H.R. 1 would repeal this credit. As it has not yet been utilized for either crude or natural gas, the JCT estimated the repeal would have no revenue impact on the budget.

The enhanced oil recovery (EOR) credit provides a credit equal to 15% of EOR costs, though it is phased out ratably when the reference price for crude oil exceeds $28/barrel. It has been phased out based on the current price of oil.

H.R. 1 repeals this credit, which is estimated to cost the government $0.2 billion over the next ten years.

Established in 2004, Section 199 allows certain oil and gas companies to deduct up to 6% of qualified production activity income, so long as the production activities are conducted in whole or in significant part within the U.S.

Both H.R. 1 and the Senate proposal repeal Section 199. The JCT estimates that eliminating Section 199 entirely would save $95.2 billion over ten years.