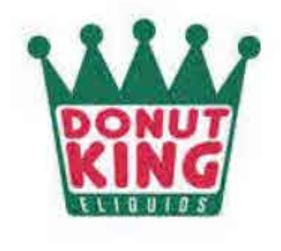 Donut King Franchise Pty Ltd filed an opposition to the application based on their earlier international trademark registration which had a date of protection in the United Kingdom from 12 November 2015. The company’s earlier mark was registered in class 29 for milk and milk products, in Class 30 for goods including doughnuts, hot and cold beverages and ice cream, and in Class 43 for restaurant and takeaway services. Donut King relied on the following grounds for the opposition:

The hearing officer examined the Section 5(2)(b) claim that there was a likelihood of confusion between the mark applied for and the earlier mark. Donut King contended that the goods in the application were similar to those protected by their earlier mark as the goods were complementary, they shared the same trade channels and were aimed at the same customers.

Donut King provided evidence of the existence of a small number of vape shops in the United Kingdom, which had in-shop or adjoining cafés to demonstrate that the goods were complementary. The hearing officer held that the evidence was insufficient, since only four examples of vaping shops in the United Kingdom with cafés were provided and only one of these was within the relevant date range. They concluded that, generally, vaping goods are bought from specialist shops and from particular sections of supermarkets. In contrast, Donut King’s goods are purchased in bakeries, cafés and restaurants, and, even if both parties’ goods were available in supermarkets, they were unlikely to be sold in proximity to one another.

Donut King also submitted evidence that flavoured e-liquids, like the goods in the application, were often made to mimic the flavour and appearance of food, including the goods protected by the earlier mark, and that they were therefore alternatives and in competition with each other. The hearing officer rejected this argument, finding that flavoured e-liquids that taste like desserts were more likely advertising gimmicks or parodies and did not demonstrate a similarity between the goods.

The hearing officer also rejected the argument that the goods were complementary because they were available in vaping cafés. “Complementary” requires a close connection between the goods such that one is indispensable or important for the use of the other in such a way that customers may think that the responsibility for those goods lies with the same undertaking. She held that the parties’ goods were neither indispensable nor important for the use of the other. The respective goods were therefore not similar and there was no likelihood of confusion.

The hearing officer carried out a comparison between the two signs and found that there was a low degree of visual similarity, a medium to high degree of aural similarity and conceptual similarity to a high degree due to the shared word elements ‘donut’ and ‘king’ together with the similar crown figurative element. However, without a finding of similarity between the goods and services, the Section 5(2) ground inevitably failed.

The hearing officer cited the cumulative conditions that must exist to successfully bring an opposition under the 5(3) ground, namely:

While there was a similarity between the marks, Donut King’s reputation was primarily known overseas (particularly in Australia) and its UK exposure was minimal (it was only able to evidence localised trade and a small social media following). In order to meet the knowledge threshold for a causal link to be made, a short period of use of a mark, especially in a vast market, is likely to require compensatory high levels of turnover and/or high levels of marketing and exposure, or some other contributory factor, which was absent in this case. The Section 5(3) ground of opposition therefore failed.

For the same reasons, Donut King’s opposition under the Section 5(4) ground also collapsed, as it had failed to show sufficient goodwill in the United Kingdom for the purposes of passing off.

This case is a valuable reminder that in order to succeed in an opposition based on a likelihood of confusion, similarity between the marks alone is not sufficient where the goods are dissimilar. Businesses should also be wary of pursuing reputation claims when trade and marketing activities in the United Kingdom have been minimal – an extensive reputation overseas (and particularly in Australia) was not sufficient to lift a Section 5(3) claim off the ground.