On February 16, Judge Furman of the Southern District of New York handed down a ruling in In re Citibank August 11, 2020 Wire Transfers concluding that Citibank could not recover $900 million inadvertently wired to lenders.

The entire 105-page decision[1] is a fascinating read, describing a near-perfect storm of convoluted financial arrangements, technological limitations, and all-too-understandable human error that culminated in the following screen shot from Citibank’s internal system:[2] 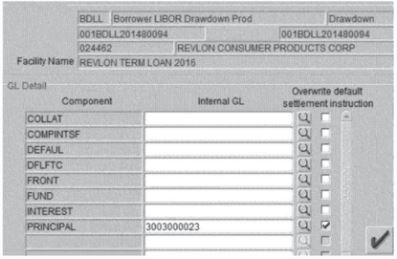 The premise was that the user needed to direct a principal payment to an internal Citibank account rather than out of the bank to the lenders, while allowing the payment of interest to leave the bank. To make this adjustment, the user clearly directs “PRINCIPAL” to an “Internal G[eneral] L[edger]” account, directing the system to “Overwrite [the] default settlement instruction.” In fact, to accomplish the intended redirection, the user also needed to select the “FRONT” and “FUND” lines. Without those cryptic additions, the full amount of all principal and interest, approximately $900 million, was inadvertently deposited in lender accounts.

The decision also offers an important and detailed discussion of New York’s discharge-for-value law. The court drew on the formulation from the leading Court of Appeals decision on the topic:

“When a beneficiary receives money to which it is entitled and has no knowledge that the money was erroneously wired, the beneficiary should not have to wonder whether it may retain the funds; rather, such a beneficiary should be able to consider the transfer of funds as a final and complete transaction, not subject to revocation.”[3]

The court, in deciding that the erroneously paid lenders were not, in fact, on notice that the payment was in error, specifically pointed to the Bloomberg Terminal chat functions, in which the hedge fund lenders ruthlessly skewered the Citibank employees … but only after Citibank asked that the funds be returned. The court reproduced some of the “quite colorful” comments, including:

“I feel really bad for the person that fat fingered a $900mm erroneous payment. Not a great career move” and “How was work today honey? It was ok, except I accidentally sent $900mm out to people who weren’t supposed to have it”[4]

Ultimately, however, one salient takeaway is inescapable: syndicated lending may, at times, look like investing in securities, but it is quite different.

Syndicated loans are not considered securities, and the loan is not based on a registration statement and prospectus but rather on a confidential information memorandum (CIM). Notably, statements in the CIM are not covered by state or federal securities laws.

Additionally, in the event a bond is to be retired early, the bondholder would expect to receive a notice that the bond is being called or, for bonds without call features, an offer to repurchase the bond at the prevailing market price (or perhaps at a premium). In the absence of these types of communications, the lender could arguably be considered to be put on notice that something was amiss should the entire outstanding principal and interest be returned prior to the bond’s maturity.

With a syndicated loan, there are generally no such formalities required. Consequently, in In re Citibank, there was no reason for lenders to imagine that they were receiving anything other than what they were due.