In a precedential opinion, the Trademark Trial & Appeal Board (Board) dismissed an opposition filed against an application for registration of a logo mark containing the word “SMOKES,” finding no likelihood of confusion with the opposer’s registered mark SMOK. The Board cited the dissimilarity of the marks and the weakness of the common mark element SMOK, as well as a lack of evidence that the parties’ trade channels overlapped. Shenzhen IVPS Technology Co. Ltd. v. Fancy Pants Products, LLC, Opp. No. 91263919 (Oct. 31, 2022) (precedential) (Goodman, Pologeorgis, English, ATJ). The decision was rendered without a brief, testimony or evidence filed by the trademark applicant. 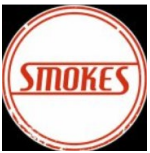 Fancy Pants Products filed an application to register a logo mark (depicted above) that included the stylized word “SMOKES.” The application record disclaimed “smokes,” meaning that Fancy Pants conceded that the word “smokes” was not inherently distinctive for its applied-for goods: “[c]igarettes containing tobacco substitutes … with a delta-9 THC concentration of not more than 0.3% on a dry weight basis,” i.e., a description for hemp-derived products eligible for federal registration in accordance with the 2018 Farm Bill. Shenzhen IVPS Technology opposed registration of Fancy Pants’ mark on the ground of likelihood of confusion with Shenzhen’s alleged rights in the trademark SMOK. In support of the opposition, Shenzhen pleaded ownership of 11 registered SMOK and SMOK-variant marks for electronic cigarettes, parts and components (among other goods) and related retail services.

Fancy Pants did not take testimony or introduce any evidence during its testimony period, nor did it file a brief. The Board noted, however, that Fancy Pants was not required to make these submissions because Shenzhen bore the burden of proving its entitlement to a statutory cause of action and its trademark “likelihood of confusion” claim by a preponderance of the evidence.

The Board first looked at what trademark rights Shenzhen could properly rely on in the opposition proceeding in view of the rights pleaded. As a result of Shenzhen’s errors in the presentation of its trademark registrations into the record with respect to verifying the current status and title of the registrations, the Board found that 10 of Shenzhen’s 11 pleaded trademark registrations were not properly made of record. Nevertheless, Shenzhen was allowed to rely on common law rights for these 10 SMOK-variant trademarks since Fancy Pants failed to object to Shenzhen’s evidence of common law use.

Having determined the scope of the trademark rights at issue, the Board turned to the issue of priority in Shenzhen’s alleged trademarks. Priority over Fancy Pants’ mark was not at issue with respect to Shenzhen’s one properly pleaded §2(f) trademark registration for the SMOK mark that was made of record (and the goods and services covered thereby). As to Shenzhen’s common law rights in its alleged family of the other 10 SMOK-variant marks, the Board explained that Shenzhen first had to establish that it even owned a “family” of marks—i.e., marks that share a “recognizable common characteristic” that have been used and promoted together by Shenzhen in such a manner as to create public recognition of that family.

Despite the submission of witness testimony pertaining “generally” to the sale of electronic cigarettes and parts and accessories, the Board found Shenzhen’s witness testimony to be “vague and non-specific,” because it did not associate the sales of electronic cigarettes, parts and accessories or related retail services with any particular SMOK mark or group of SMOK marks. Moreover, the witness testimony was not supported by any documentary evidence making such an association. Therefore, the Board found insufficient evidence to support common law use of any particular SMOK marks as a family prior to Fancy Pants’ priority date.

The Board raised a further issue with Shenzhen’s claimed family of marks in that the family of marks doctrine requires a showing that the “SMOK” family element is not descriptive or highly suggestive, or “so commonly used in the trade that it cannot function” as a distinguishing feature of a trademark. Shenzhen did not dispute the finding on the record that consumers are likely to pronounce its SMOK mark as the phonetic equivalent and misspelling of the known term “smoke.” Of course, evidence showed that the word “smoke” has descriptive significance in connection with electronic cigarette products, such as those listed in Shenzhen’s registration. Thus, because of the descriptive nature of the term “smoke,” Shenzhen had to make a strong showing of acquired distinctiveness of its SMOK trademark as a family feature. Here, the Board considered the distinctiveness of the SMOK trademark in the context of the six Converse factors of secondary meaning and found Shenzhen’s limited evidence pertaining to the amount and manner of advertising and length of use of the mark unpersuasive as to acquired distinctiveness. Because Shenzhen was unable to establish the acquired distinctiveness of the descriptive term “SMOK” as a feature of a family of SMOK marks, the Board held that Shenzhen had not established rights in a family of SMOK marks and that Shenzhen therefore could not prevail on a likelihood of confusion claim predicated on those alleged rights.

Finally, the Board turned to the likelihood of confusion analysis with respect to Shenzhen’s one properly pleaded SMOK registration vis-à-vis Fancy Pants’ SMOKES logo mark under the relevant DuPont factors:

The Board concluded that the first and third factors weighed against a finding of a likelihood of confusion. First, in examining the similarity of the marks, the Board determined that the level of distinctiveness of the word “smoke” as the common element of the two marks was “weak” because it was descriptive or highly suggestive of the parties’ respective smoking-related goods. Therefore, even though the Board found the parties’ marks to be similar in appearance, pronunciation and commercial impression, it found the design portion of Fancy Pants’ mark to be, as a whole, distinguishable from Shenzhen’s “weak” SMOK mark so as to avoid confusion. And although the Board held that Fancy Pants’ cannabis cigarettes were related to Shenzhen’s electronic cigarettes, the Board found no overlap in the parties’ respective channels of trade as set out in the record. The Board noted that Shenzhen had not shown that its channels (such as smoking shops, vaping shops and convenience stores) were also ordinary trade channels for Fancy Pants’ goods, which were shown to be sold primarily through local cannabis dispensaries.

Therefore, despite the parties’ marks covering related goods, the Board’s assessment of the available evidence and testimony pertaining to the relevant DuPont factors resulted in a finding of no likelihood of confusion between the SMOKES logo and Shenzhen’s registration for its SMOK trademark, and the opposition was dismissed.

Practice Note: The Board’s precedential opinion provides a valuable checklist for effectively and properly submitting critical evidence and testimony in Board proceedings.