The Beer Institute received a consumer challenge about the commercials, alleging that they did not comply with the Beer Institute's Advertising/Marketing Code and Buying Guidelines. The complainant alleged that the commercials violated Section 4(c) of the guidelines, which state: "Beer advertising and marketing materials may portray beer as a part of personal and social interactions and experiences, and a brand may be portrayed in appropriate surroundings as a superior choice to complement a particular occasion or activity. Beer advertising and marketing materials should not, however, claim or represent that individuals cannot obtain social, professional, educational, athletic, or financial success or status without beer consumption."

Late last year, the Beer Institute's Code Compliance Review Board issued a decision, finding that the commercials did not violate its guidelines.

Noting that Stockwell is clearly shown toasting with Modelo post-competition, after medals have been awarded, the CCRB said that, "There is no implication in the commercial that drinking Modelo helped her achieve her championship."

Regarding the Ortega commercial, the CCRB noted that Ortega is shown drinking with friends after an event and is not shown drinking during training or competition. The CCRB found, therefore, that, "There is no implication in the commercial that drinking Modelo has improved Mr. Ortega's prowess, performance or training."

Although compliance with the Beer Institute's guidelines is voluntary, if the CCRB had found that the commercials were not in compliance, the CCRB could have asked the marketer to revise or withdraw the advertising.

What's the lesson here? If you're using athletes to promote beer, in order to avoid violating the Beer Institute's guidelines, it's important to clearly separate situations where the athlete is drinking from those situations where the athlete is competing. While the CCRB is clearly comfortable with a brand showing an athlete celebrating with a beer after-the-fact, any suggestion that an athlete was drinking before, or during, competition is likely to be problematic. 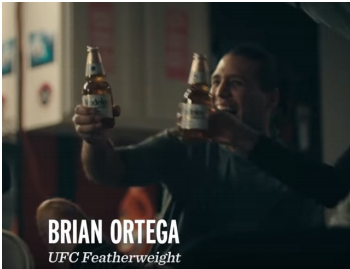