Last week Grab drivers in Hanoi went on strike, shutting off their Grab accounts and refusing to respond to requests for rides or deliveries. Dressed in the now familiar green and white jackets and helmets they wear to identify them as Grab drivers, they gathered outside the company’s local offices to voice their displeasure over a change in the fee scheme that resulted in a reduction of the drivers’ share of fees collected from customers. The change came from a decree on tax that went into effect on December 5 and imposed VAT taxes on the entire fee collected from passengers rather than just the portion of the fee collected by the ride hailing company. 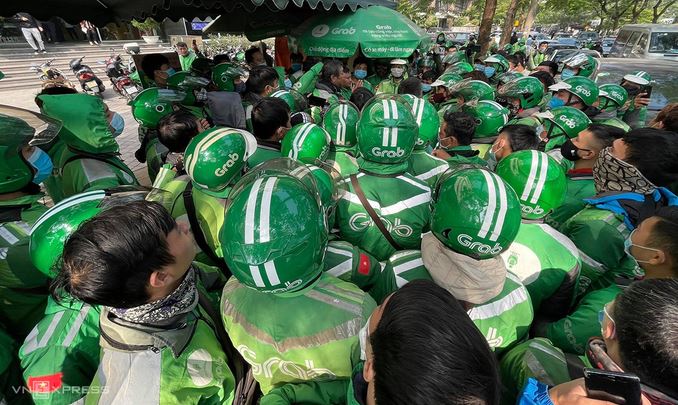 Grab drivers gather outside the Grab offices in Hanoi on December 7, 2020. Photo from VNExpress by Anh Tu. https://e.vnexpress.net/news/business/companies/grabbike-riders-strike-over-increased-commission-rate-4202756.html

The new tax rules come as the most recent move in the Vietnamese Government’s relationship with Grab and other ride hailing firms and marks the culmination of a years long debate as to the exact nature of ride hailing.

In America, where the concept of ride hailing first emerged, the debate about regulation of the firms involved centers mainly on the relationship of the drivers with the company. Are they employees or freelancers and what obligations does the company have towards the drivers? In Vietnam, however, the debate so far has focused on the nature of the company itself. Is a ride hailing company a technology company or a transportation company and how should it be taxed?

What is Ride Hailing?

Ride hailing is a service that connects passengers with drivers for the purposes of transportation by contract. Ride hailing companies provide apps and software that allows passengers to input a fixed point of origin and destination and connect with a driver who owns and operates his own vehicle and who can transport them according to their request. Ride hailing drivers are not specially licensed and cannot pick up passengers on the street like taxis.

Passengers, especially in Vietnam, pay either using an e-wallet connected to the ride hailing app (which is then split and paid to the company and the driver) or with cash. According to Tech in Asia (see article here) ride hailing firm Grab:

generally receives a fee from drivers across its various services, such as GrabTaxi, GrabCar, and GrabBike. Drivers deposit credits into an account with GrabTaxi, and the corresponding amount is deducted for every booking they complete.

The Beginnings of Ride Hailing in Vietnam

Ride-hailing first came to Vietnam in 2014 through the auspices of the Singapore company Grab. It first introduced GrabTaxi which provided customers with cars owned and operated by individual drivers and then later that same year added GrabBike which offered similar services but with motorbikes.

Shortly thereafter American company Uber made a foray into Southeast Asia, including Vietnam, and had some success, but in 2018 sold its Southeast Asian subsidiaries to Grab. Indonesian company Go-Jek, in Vietnam Go Viet until this year, also joined the competition for the ride hailing market. Several other smaller companies and startups entered the sector including Aber, FastGo, VATO, MyGo, and Be Group JSC. In 2020, the estimated revenue in the ride hailing sector is expected to exceed two billion USD.

The Legislative History of Ride Hailing in Vietnam

Arguing against inclusion of Grab under this definition, lawyer Phan Manh Thang (see his article on the issue in Vietnamese here) reasoned that ride hailing companies don’t own the cars that are used to transport goods and passengers, they does not actually “use cars” to conduct such activities. The drivers are the ones who own the vehicles and they are the ones who provide the service and are paid by the passengers. In other words, ride hailing companies have no contractual privity with passengers. They are not, therefore, transportation services.

Additionally, Grab is not the manager of the vehicles. It has no employer/employee relationship with drivers. It does not have labor contracts nor pay salaries to drivers. Drivers are not bound to perform services during set times nor even for a minimum amount of time. They are free agents and thus Grab does not have a supervisory relationship with them. For these reasons Grab does not fall under the definitions of a transportation service.

According to Phan even this definition does not apply to Grab as there is no contract, especially written, between the passenger and Grab. Any contract that exists is between the driver and the passenger. In addition, the contract is electronic, or digital, and may not even meet the requirement of being a written contract. Therefore, Grab is not in the business of transporting passengers according to contract, let alone the business of providing transportation services.

These arguments provided the main points against categorizing Grab and Uber and other ride hailing companies as transportation services under the law existing in 2014. But the application of the law in 2014 came under question with the initiation in July of 2015 of a ride hailing pilot program that would allow Grab and, later, Uber to participate as users of ‘science and technology for the transportation sector.”

The pilot program allowed Grab and Uber to operate without specific legislation governing their operation as “science and technology” companies and to be regulated and taxed–at least for the duration of the pilot program–as such, rather than complying with the more onerous requirements in the transportation industry. This allowed the two ride hailing firms to minimize regulatory compliance and pay a minimum of taxes, increased their cash on hand and made it possible for them to offer substantial discounts on ride services that arguably undercut traditional taxis.

But not everyone was satisfied with the classification of ride hailing in Vietnam as a “science and technology” service nor with the arguments behind doing so. In fact, taxi companies in Vietnam vehemently disagreed and insisted that Grab and Uber were in fact transportation companies and should be taxed accordingly to maintain a level playing field between the app based services and traditional taxis.

In 2017, traditional taxi company Vinasun sued Grab. They claimed that Grab’s ability to undercut their prices caused losses in 2016 and 2017 of 40 billion VND (approximately 1.7 million USD). Grab, they argued, was really a transportation company. They provided transportation services just like Vinasun, but because they were categorized as a “science and technology” company they were only subject to three specific regulations while Vinasun was subject to dozens. One example was the ban on taxis on high traffic roads during peak hours in Hanoi and Ho Chi Minh City, a prohibition which did not apply to Grab drivers.

Additionally, Vinasun argued that because of these loopholes which opened by the Government’s treatment of Grab as a “science and technology” provider, they were able to offer “rampant” promotions and deals that were a violation of competition laws and damaged the profitability of traditional taxi services. Grab, in turn, offered that disruption was the purpose of technology and that their apps were not in violation of competition laws and because of their heightened use of technology they were in “healthy” competition with traditional taxi service.

In late 2018 the Ho Chi Minh City People’s Court issued a verdict partially for Vinasun and ordered Grab to pay Vinasun 4.8 billion VND (approximately 207,000 USD). Grab appealed and earlier this year the Ho Chi Minh City Appeals Court upheld the ruling. According to VN Express in their article on the ruling:

The HCMC Appeals Court ruled Tuesday said that Singapore-based Grab has operated as a transport company in Vietnam by deciding fares, managing vehicles and directly receiving money from customers.

Grab drivers have their income cut if passengers are not satisfied with their services, which means the drivers are under the company’s management, just like other transport companies, the court said.

However, as Grab is only registered as a technology company in Vietnam, it does not have to bear the same tax rate and pay drivers’ insurance and other fees as other taxi firms, which is not an equal situation, the court said.

Although the entrance of Grab into the market has benefited users, it was one of the main reasons that caused a decline in Vinasun’s revenue, and therefore the earlier ruling is upheld, it added.

Some commentators caution that such a decision will set a bad precedent and allow other taxi companies to sue Grab and other ride hailing companies for losses that may or may not be attributable to their penetration in the market. This is a limited possibility, however, as the window during which ride hailing in Vietnam was classified as “science and technology” services was closed in April of this year when a new decree ended the pilot program and definitively categorized ride hailing in Vietnam as a transportation service.

In a decree issued on 17 January 2020 and effective as of 1 April 2020, the Government created a new category that now includes both taxis and ride hailing services. Now, the “business of transportation by automobile” is defined as

This piece of legislation did not come a surprise, though, and looking at the legislation implementing the pilot program it is clear that the possibility existed even in 2015. According to that document, some of the main purposes of the pilot program were to determine how ride hailing services should interact with the Government and the community and, specifically, how they would pay taxes.

What’s Next for Ride Hailing in Vietnam?

Now the Government has imposed a new tax regime on ride hailing companies, one that continues their treatment as transportation services rather than as “science and technology” companies. Under the pilot program, the service provided was seen as the provision of the app and the company was only taxed according to the amount of fees it received for that service. Drivers were taxed separately on their portion of income as freelancers. But now that the service under contemplation is the act of transportation itself rather than just the provision of an app, the company is now liable for taxes on the entire service provided. The tax for drivers on their portion of the service remains unchanged.

With the imposition of regulations earlier this year and now the change in tax status, the Government has come to a conclusion on how it wants to treat ride hailing services. They are transportation services and not “science and technology” companies. What remains, though, is the question of how the ride hailing companies will continue their relationship with drivers. Now that the Government views drivers as assisting the companies in providing a unified service, will they continue to be classified as gig workers or will the Government make moves to consider them as employees of the ride hailing companies and impose labor regulations accordingly?