Several companies have received FDA approval for antagonist antibodies against calcitonin gene-related peptides. These so-called anti-CGRP biologic drugs are a relatively new type of injectable medication for preventing migraines without side effects.

Teva’s Ajovy® product received FDA approval in September, 2018, and shortly after that, Teva sued Eli Lilly based on the pending application for Lilly’s Emgality® product. The Court dismissed Teva’s lawsuits as premature because Lilly’s aBLA application had not yet been approved. Coincidentally, Lilly was granted approval later that same day, and Teva re-filed its lawsuits, asserting that nine of Teva’s patents are infringed by Lilly’s Emgality® product.

Teva’s patents are all fairly broad, and tend to cover the protein functionally, i.e., by binding location.

Lilly responded by filing IPRs against all nine of Teva’s patents. Notably, this approach could clear the way for other competitors as well (including at least Amgen with its Aimovig product, and Lundbeck with its Vyepti™ product), though as of now Teva has not filed suit against any other parties.

The PTAB instituted all nine IPRs: 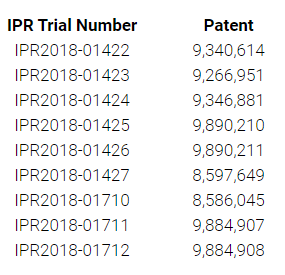 The district court litigation has been stayed since April, 2019, pending outcome of the IPRs.

In late February, 2020, the first six IPRs were decided, with Lilly successfully canceling all challenged claims in each proceeding. The remaining three IPRs have yet to be decided, but rely on two of the same secondary references. Thus, it seems likely that Lilly will prevail there as well, meaning the asserted claims in all Teva’s asserted patents will be have been found unpatentable.The district court litigation has been stayed since April, 2019, pending outcome of the IPRs.

Statistically, biologic patents have proven harder to kill via IPR. Institution rates are generally somewhat slower than that for biotech/pharma patents in general. Similarly, the number of trials resulting in canceling all challenged claims is somewhat lower than that for other biotech/pharma patents. Thus, this is a significant achievement for Lilly. Emgality® generated $66 million in revenue in the fourth quarter of 2019, and now the threat of Teva’s infringement suit appears to be abated, opening the door for even more marketplace success.