On January 17, 2020, Thailand’s current Trade Competition Commission (TCC) again showed their proactive approach to enforcement by issuing guidelines for competition litigation under the Trade  Competition Act B.E. 2560 (2017). This act prohibits anticompetitive actions, abuse of dominant market power, cartels, collusion, restrictive agreements or arrangements, and unfair trade practices. The new rules give clear guidance to both the TCC and the public, and will help competition litigation proceed more quickly in order to protect free and fair trade in Thai markets.

The new rules, which focus on complaints, investigations, and procedures for criminal and administrative actions, specify the role, duty, and rights of the following parties:

The rules also clarify that the TCC can initiate an investigation even when no complaint is filed.

The claimant, who may be an injured party or witness to the wrongdoing, may file a complaint with the TCC in writing or by email, in person to a TCC officer, or by telephone. An officer receiving a verbal complaint needs to record it—along with testimony of any accompanying witnesses—and collect the claimant’s signature. Complaints must give the facts and evidence, and written complaints also require the claimant’s signature. Once the complaint is filed, the TCC can proceed with the investigation regardless of subsequent withdrawal or change of circumstances, such as death of the claimant.

The new rules also seem to empower the TCC with a police-like ability to investigate criminal actions. The TCC’s authority in criminal complaints used to be limited to filing a criminal complaint with the inquiry police (the section of the Royal Thai Police tasked with inquiring into criminal cases), who would then investigate the matter and submit a prosecution or non-prosecution suggestion to the public prosecutor. Under the new rules, if a criminal offense is found, the TCC has to ask the inquiry police (or other officers under other laws) to transfer the criminal case under the Trade Competition Act to the TCC. The TCC can order and summons a person to be interviewed.

After receiving a complaint, the sectary of the Office of the TCC (OTCC) may assign an officer to investigate the facts and gather evidence in order to identify the wrongdoer. This process is limited to 30 days from receipt of the complaint, after which the secretary must determine whether the complaint has grounds. The TCC will then issue an order to either dismiss a groundless complaint or to proceed with making a formal accusation according to the relevant criminal or administrative proceedings.

The TCC will appoint a subcommittee to investigate the criminal offense, and must inform the accused of this appointment. The subcommittee can be challenged for conflict of interest if a member has a close connection or conflict with the claimant, the respondent, or the accused.

The subcommittee will commence their work without delay, and the committee’s duties will mirror those of the inquiry police: ordering the accused and witnesses to be interviewed and collecting all evidence related to the wrongdoing. The rules also require the subcommittee to inform the accused of the offense according to the Criminal Procedure Code and give the accused 15 days to reply. The rules prohibit revealing the name, address, or identifying information pertaining to the claimant or witnesses.     The accused may reply to the criminal charge verbally or in writing. The accused is allowed to present witnesses or evidence, or to ask the subcommittee to call in a witness or evidence. The subcommittee may deny the request if they believe it is a delay tactic, is made in bad faith, or concerns irrelevant witnesses or evidence. Guilt under the Trade Competition Act

If the subcommittee finds the accused guilty, it will suggest a criminal or administrative penalty to the TCC. If the subcommittee suggests a fine under section 79 of the Trade Competition Act, the accused must plead guilty—or, for the purposes of a settlement offer, decline to accept guilt—and pay the fine within the specified time. The criminal case can be revoked under the Criminal Procedural Code, but only if the accused pleads guilty first.

The interim order is a new tool that enables the TCC to protect competition more efficiently. An interim order is made during the course of the subcommittee’s investigation, without the court’s involvement, in order to remedy damage, and prevent further damage, in the public’s interest.

The subcommittee can recommend that the TCC issue an interim order forcing an accused business operator to suspend, cease, or change their operations for a specified duration if there is reasonable cause to believe that the accused is involved with a violation of section 50 (abuse of a dominant market position), section 51 paragraph 2 (merger or acquisition to dominate the market), section 54 (formation of a serious cartel), section 55 (reduction of competition), section 57 (unfair trade practices), or section 58 (collusion with a foreign business operator for monopoly or unfair trade impacting the economy and the public interest as a whole).

To solve the above problems, administrative penalties were imposed in the current act for the following offenses: 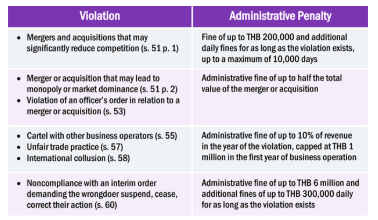 The TCC’s new rules on complaints, investigations, and procedures for criminal and administrative actions provide comprehensive guidelines to claimants, accused parties, OTCC officers, and the TCC themselves. By allowing the TCC to act as the inquiry authority in a criminal case, as well as an administrative authority that can issue an administrative order or interim order even before filing the case with the court, the rules assure the public that free and fair competition will be protected more effectively and efficiently than before. With the TCC now taking a more proactive posture in regulating and enforcing the Trade Competition Act, business operators should be ready to fully comply with the Trade Competition Act by being sure to avoid any potentially anticompetitive acts.

The challenge of enforcing arbitration impartiality