On 22 July 2019, the High Court upheld a District Court's decision in convicting and sentencing Mr. Chiew Kok Chai for an offence under the Employment of Foreign Manpower Act ("EFMA") for the following activities:

1. Making false declarations of employers when obtaining work passes for foreign workers; and

2. Abetting the commission of the above offence under the EFMA.

His appeal was dismissed, and he was subsequently sentenced to 12 weeks' imprisonment for the offences.

Mr. Chiew was the registered director of Wan Fu Builders Pte Ltd ("WFB"). He jointly managed WFB and Wee Chong Construction ("WCC") together with Tan Yock Jeen ("Tan"), and was involved in managing construction projects and foreign employees of both businesses.

WFB was unable to hire foreign manpower as it had defaulted on previous levies. To circumvent this restriction, Mr. Chiew conspired with Tan to apply for work pass applications for three foreign employees under WCC, with the intention of employing them under WFB instead. Tan submitted the work pass applications to the Work Pass Division ("WPD") of the Ministry of Manpower ("MOM"). The work passes were issued on the false declaration that the foreign employees were employed under WCC instead of WFB.

By virtue of the above, Mr. Chiew had committed an offence under the following sections of the EFMA:

1. Section 22(1)(d) - for providing statements and information in relation to a work pass application or renewal that he knows to be false; and

The above offences are punishable by a fine not exceeding S$20,000, a jail term not exceeding two years, or both, as prescribed by Section 22(1)(ii) of the EFMA.

The High Court acknowledged that sentences imposed for offences under Section 22(1)(d) offences had not been consistent and consequently difficult to rationalise. Throughout its decision, it also emphasised the importance of protecting the work pass framework from being undermined. Errant employers who abuse the work pass framework gain unfair advantages that are detrimental to both local workers and honest employers. 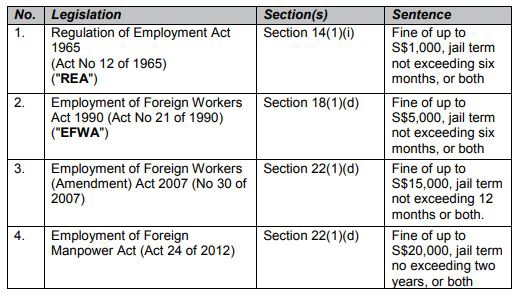 The Court disagreed with Mr Chiew that a fine would be adequate deterrence. It took the view that errant employers, who already gained an economic or financial advantage from not paying the true costs of hiring foreign manpower, would treat such financial penalties as mere business costs. A financial penalty in the form of a fine would not be strong enough a deterrence.

Based on its analysis, the High Court found that an imprisonment term should be the starting point for offences under Section 22(1)(d) of the EFMA. This takes into account the legislative aims of the EFMA in maintaining the integrity of the Singaporean workforce and the resultant need for deterrence to prevent the prevalence of offences involving the work pass framework.

The Singapore Government has continued to be stringent in its immigration policies, increasing its scrutiny of work pass applications and ensuring that foreign workers who have obtained a work pass in Singapore are being legitimately employed by the respective companies listed in their applications. From 2016 to 2017, at least 134 individuals were convicted of making a total of 494 false declarations in connection with work pass applications or renewals.

Employers must always ensure that its declarations in the applications are true and accurate at the time of the application. It should not abuse the work pass system to circumvent the restrictions imposed on the company lest its directors are penalised with a minimum jail term.