The Sentencing Council has recently published a report (the "Assessment") of the impact of the Health and Safety Offences, Corporate Manslaughter and Food Safety and Hygiene Offences Definitive Guideline 2016 (the "Guideline").

Below we analyse the trends in health and safety prosecutions highlighted in the Assessment alongside the HSE's own enforcement data to explain the impact of the Guideline three years after it came into force on 1 February 2016.

It sets out matrices for determining a starting point and a range for sentencing. For organisations the sentence will be a monetary fine and for individuals the sentence could be a fine or another order, such as a custodial sentence.

For health and safety prosecutions against organisations the matrix uses a determination of culpability and a 'harm category' based on the risk of harm created by the offence, likelihood of harm and the actual harm caused. The Guideline sets out different starting points and ranges of fines based on culpability, harm and the size of the organisation according to the last three years' turnover.

Aggravating and mitigating factors can then be used to adjust the fine upwards or downwards within the range. The court then must also consider an adjustment for proportionality. A fine should reflect the seriousness of the offence and any benefit derived from it, whilst being substantial enough to have a real economic impact but not (in most cases) so far as to put the organisation out of business.

Finally the court must consider whether the proposed fine could impact the organisation's ability to pay compensation to victims or improve conditions, and the potential impact on staff, customers and the local economy.

Once the fine has been determined, discounts are available for assisting the prosecution or pleading guilty. Compensation and ancillary orders can be made in addition to the fine and the court will consider whether the total sentence is just and proportionate.

The Guideline provides a very similar matrix for prosecutions of individuals, save that the court must consider the custody threshold when contemplating a custodial sentence and mitigating and aggravating factors can move the sentence into or out of custodial territory as well as adjusting the amount of a fine.

The number of individuals sentenced has generally increased yearly, and rose from just under 150 in 2011 to 200 in 2017.

The HSE enforcement figures cover all types of case prosecuted by the HSE and the Crown Office and Procurator Fiscal Service in Scotland ("COPFS") as opposed to just health and safety offences in England and Wales. This data contrasts the Assessment data, with a downwards trend since the spike in 2015/16 (fig.1). 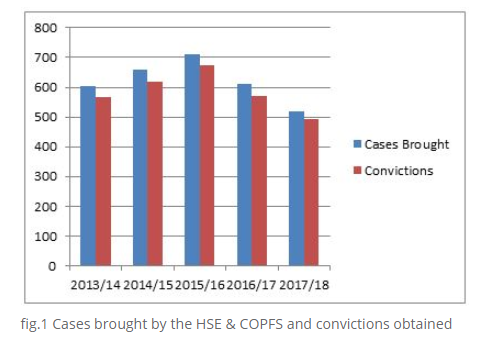 Almost 99% of organisations are sentenced via a fine. In recent years there have been various examples of eye-watering fines that would shake the foundations of even the most financially stable of businesses.

Bupa was fined £3m in June 2018 in relation to a legionnaires' disease outbreak at a care home that resulted in the death of an elderly patient. Warburtons was fined £2m and £1.9m in two prosecutions just six months apart in 2017 following industrial accidents that caused a spinal fracture and friction burns respectively.

HSE data illustrates a huge increase in total and average fines following the introduction of the Guideline. In 2014/15 (the full last data year pre-Guideline) fines totalled around £18m and this rose to over £72m by 2017/18; a four-fold increase in just three years.

This HSE data also demonstrates a five-fold increase in the average fine within this period (fig.2). 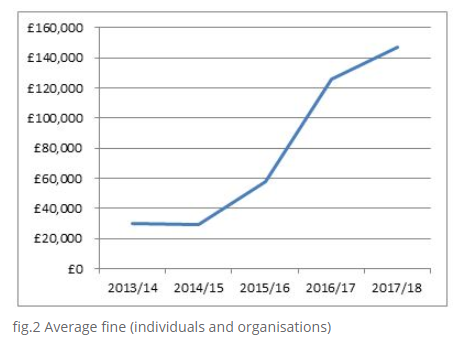 However, the proportion of individual offenders sentenced via a fine has decreased from 81% in 2011 to 57% in 2017. The use of suspended sentences rose in the same period from around 5% in 2011 to 21% in 2017, making it the second most frequent sentence. Immediate custody has been the most infrequent sentence since 2011 and was used in 5% of cases in 2017.

The increase in custodial (suspended) sentences could be attributable to the Guideline which provides a custodial sentence within the sentencing range or as a starting point for ten out of sixteen offences, but other factors like the seriousness of the offences committed could equally have contributed.

A sample of judgments analysed by the Sentencing Council indicated a smaller amount of appeals were being made against sentencing decisions following the Guideline, however the analysis is presented as indicative only because the sample is small. One of the purposes of the Guideline was to provide a clear sentencing decision-making process that would improve consistency in judgments which should, in theory, reduce the need for offenders to appeal.

The Sentencing Council has analysed the judgments on a sample of sentencing decisions for fines over £500,000 and prosecutions of individuals and concluded that Guideline is being considered and applied appropriately by the Judiciary.

According to HSE data, the amount of prosecution cases brought is on a downwards trend which on a very basic analysis indicates that health and safety standards are improving.

Interestingly, the a sample analysis in the Assessment also identified that the vast majority of judgments (94% organisations and 90% individuals) featured mitigating factors compared to a relatively low amount featuring aggravating factors (28% organisations and 40% individuals). Again, this could be an indication of active cooperation from industry and a positive impact of the transparency of the Guideline providing indicative lists of good and bad practice.

Prosecutions are of course just one element of the HSE's work. The HSE Business Plan 2019/20 shows that it is still focussed on proactive identification of risks in key sectors as opposed to reactive investigation of incidents.

Prohibition and improvement notices are much more common than prosecutions and the amount of notices issued has fluctuated between 11-12,000 for the last three years, indicating that there is still much more to be done to tackle workplace health and safety risks. Organisations issued with a notice will face a fee for intervention.

The huge increase in total and average fines post-Guideline will be the takeaway for most organisations. A significant fine will damage an organisation's financial stability and the negative press associated with a prosecution can further compound this damage.

Of equal note is the HSE's impressive conviction rate which has remained between 93% and 95% since 2012/13. If a prosecution is pursued, organisations can be relatively sure of conviction.

Individuals will also heed the increased number of prosecutions and suspended sentences as well as the rise in average fine being imposed.

More so than ever before, organisations that that do not prioritise health and safety at the highest level risk the future of their business.