Liberalisation of space laws in Australia

The introduction of the Launches and Returns Act amends the provisions of the Space Activities Act 1998 (Cth) ("Space Activities Act") which had been introduced in 1998 in order to regulate the conduct of space activities in Australia (and, in particular, the operation of commercial launch services from Australia). Subordinate legislation, known as the "Rules", has also come into effect to support the operation of the Launches and Returns Act. These Rules repeal the previous regulations that had been in place under the Space Activities Regulations 2001 (Cth).

Why was the Launches and Returns Act introduced?

The Launches and Returns Act was introduced in order to reform Australia's space activities regulatory framework and strike a more appropriate balance between promoting investment and innovation in the domestic space industry, and ensuring safe participation by industry players. The Act seeks to reduce the barriers to participation in Australia's space industry primarily through a simplification of the approvals process for the launches and returns of space objects in Australia.

The introduction of the Act follows a long period of public consultation and legislative review which began initially in October 2015 when the Australian Government decided to commence a comprehensive review of Australia's space industry capability in light of the dramatic advancements in space-related technologies and applications that had taken place since the introduction of Australia's legislative framework in 1998.

The commencement of the Launches and Returns Act will bolster the ability of the recently established Australian Space Agency to further its key objectives of: (a) coordinating, and promoting, Australia's domestic space sector activities; and (b) supporting the growth of Australia's space industry through the promotion of increased industry opportunities.

How does the Launches and Returns Act amend the former legislation?

The Launches and Returns Act amends the Space Activities Act by:

• broadening the regulatory framework to include arrangements for launches from aircraft in flight and the launches of high powered rockets;

• reducing the insurance requirements that apply to these launch activities;

• increasing non-compliance for damage to people and property.

Industry players will now require the following licences, permits and authorisations under the Launches and Returns Act to engage in space activities: 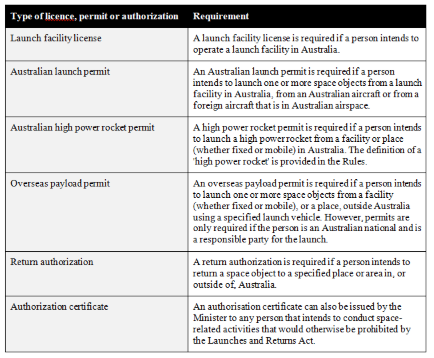 The Rules outline the information that an applicant will need to provide for these different licences, permits and authorisations under the Act. They also set out the insurance requirements and conditions that apply to these various space activities.

The Rules are contained in the 3 separate pieces of subordinate legislation. These include:

This new legislative regime will have important implications for established space industry players and the emerging small satellite and launch industry players, both in Australia and overseas.

The reductions in cost and administrative barriers to participation are likely to pave the way for a more open market and create new commercial opportunities for companies looking to continue, or expand, their investments in space-related activities in Australia.

Only time will tell whether these legislative changes will have the desired effect of promoting participation, investment and innovation in Australia's burgeoning space industry, but we will be watching on with keen interest.