Liquor licensing law in South Australia has been updated and amended over a series of changes in the last two years. The final, and most significant, tranche of amendments to liquor licensing laws has taken effect as of 18 November 2019. This includes the implementation of new liquor licence categories. Existing licensees need to review, consider and action a number of issues with their “transitioned” licences.

Over the last two years there have been a series of changes made in liquor licensing regulation in South Australia, in particular to the Liquor Licensing Act 1997 (SA) (Act).

These result from the staged implementation of amendments made by the Liquor Licensing (Liquor Review) Amendment Act 2017, which received assent on 28 November 2017.

As of 18 November 2019, the final (and most significant) tranche of changes to the Act have taken effect.

Earlier tranches of amendments took effect from 18 December 2017 and 24 September 2018.

This is one of an ongoing series of Legal Alerts on changes to South Australian liquor licensing laws. We have discussed the changes to the licensing regime throughout each phase they have been introduced.

What are the new Liquor Licensing Categories?

One of the most significant amendments now implemented is the change to new categories of liquor licences. 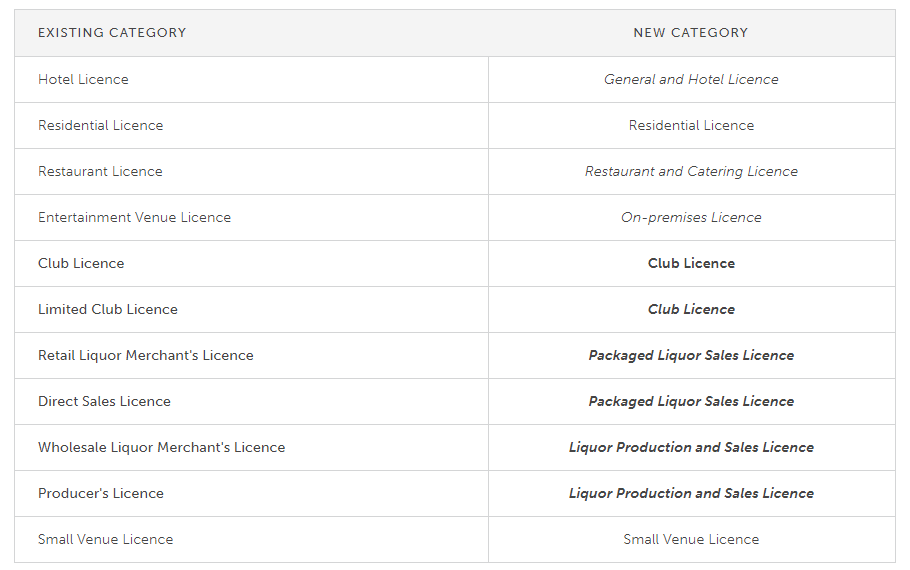 What Should Licensees do now?

Licensees should note the possibility that a number of conditions on their former licence could drastically increase their fees. Most notable are the incoming “trading hours risk fees”.

By now, licensees should have received confirmation (in the form of a “document pack”) from the licensing authority confirming that their “old” licence has been transitioned to a new category. This document pack will include a copy of the “new” licence (with new licence number), and details of new “signage” to replace that issued under the “old” licensing regime.

Licensees should be aware that particular conditions on their “old” licence could, if they are carried over to the “new” licence, result in a higher annual fee than might otherwise be the case.

“Trading hours risk fees” are the most significant in this regard. These comprise additional “loadings” on annual fees where late trade is allowed, as follows:

It has been observed elsewhere that while SA has not implemented a “ban” on late night trade as such, the annual fee regime serves as a defacto “ban” for many businesses, given the steep fee impost.

To avoid a higher annual fee, licensees can curtail the trading hours allowed by their licence, and/or seek to reduce the licensed capacity.

To do so, licensees can login to the Liquor and Gaming Portal, click “Applications” and then “Variation to conditions (downgrade)”. Licensees can lodge an e-form to reduce their trading hours or licensed capacity.

Licensees can check the potential increase in their annual licence fee by using the licensing authority’s Fee Calculator.

“Old” Direct Sales Licences – A Problem and a Solution

One of the (perhaps) unintended consequences of the changes implemented to the Act is the loss of the old Direct Sales Licence (DSL) category.

This is, in many respects, an unfortunate development – the apparent desire to “streamline” the number of licence categories has led to the loss of the DSL category, which was an efficient and cost-effective “fit” for many “on line only” businesses.

Under the provisions of the amending legislation, the licensing authority was required to transition “old” DSLs to a “new” Packaged Liquor Sales Licence (PLSL).

A significant shock for many licensees came with the realisation that the PLSL category (even with conditions restricting activity to “direct” sales only) would attract a $1,800 annual licence fee.

This is an especially harsh result for smaller-scale wine producers who had chosen to operate under a DSL (rather than an “old” Producer’s Licence (PL)), as the annual fee for the new PLSL is significantly more than that for the new Liquor Production and Sales Licence (LPSL) category, to which the PL, but not the DSL, has been transitioned. In light of concerns raised by a number of licensees, the licensing authority has advised a number of applicants that it is willing to waive the application fee associated with an application for the grant of a new LSPL (for any applications made before 31 July 2020) made by an existing licensee holding a PLSL as a result of a transition from an “old” DSL. This is subject to:

This will essentially allow wine producers (and other liquor producers) who have been transitioned to a PLSL from a DSL the opportunity to avoid the significant fee increase by getting a new LPSL to replace their PLSL. Applications to transfer from a PLSL to a LPSL can be made here.

Alternatively, licensees who wish to retain their new PLSL (but want to avoid the increased annual fee) may wish to consider making an application to the licensing authority to waive or reduce their annual fee. To pursue this avenue, licensees can lodge submissions with the licensing authority pursuant to regulation 4(2) of the Liquor Licensing (Fees) Regulations 2019.

As noted above, the “new” LPSL category in effect replaces the “old” Producer’s Licence and the “old” Wholesale Liquor Merchant’s Licence.

While on its face the reduction in total number of licence categories may be seen to be a good thing in and of itself, it was perhaps predictable that policy would need to be developed by the licensing authority as to how to deal with the variety of businesses which may need to “fit” within a single, broader category of liquor licence. Interstate jurisdictions have seen the proliferation of a number of formal and semi-formal “sub licence” categories develop over time.

Consistent with this interstate experience, the licensing authority in SA has published a LPSL “information bulletin”.

Without any further explanation, the bulletin reflects that the licensing authority will be treating the new LPSL category as having three distinct “sub-categories”.

This may be a reflection of a practical approach to an outcome reached with the best of intentions – particularly noting the Honourable Tim Anderson QC’s comments in his “2016 Review of the South Australian Liquor Licensing Act 1997” (at [4.1.15]):

“I am mindful that simply reducing the number of primary licence categories but then introducing subcategories to reflect different business models would not be conducive to the overall aims of this review.”

Putting aside debate around the practical effect and reduction of (or increase of) “red tape” occasioned by the amendments to the Act – the practical point here is that holders of, or applicants for, the new LPSL should carefully note the “sub categories” and rights and restrictions attached to each.

New LPSL licensees should also be aware that they are eligible to apply for event endorsements in relation to “one-off” events at which they will be permitted to sell and supply liquor for consumption and/or takeaway at a specific place and event (i.e. not at the licensed premises). Where a licensee wishes to share its premises with another licensee, collective outlets authorisations can also be applied for.

Under section 42 of the Act, it was and remains a condition of every licence that the licensee must comply with the codes of practice.

Similarly, the obligation on licensees to have in place a Risk Assessment and Management Plan (RAMP) remains under the amended Act. The RAMP needs to set out operating procedures implemented by the licensee to ensure that the business conducted pursuant to a licence is compliant with the codes of practice.

Licensees should now review and note the amendments to the codes of practice and take this opportunity to look over and (if necessary) refresh and update their RAMP.

Do You Need to Update Signage?

As a final note, licensees may also be required to update their signage at their premises as a result of a transition to their new licence.

These changes should have been conveyed to licensees as part of the “document pack” sent out by the licensing authority.

Licensees should ensure that they comply with the new signage requirements. Further details on display requirements can be found here.

Finlaysons - Andrew Williams and Will Taylor
Back Forward