Further to the parliamentary elections of 14 October 2018, the new coalition composed of DP, LSAP and Déi Gréng released on 3 December 2018 an agreement (Agreement) for the formation of the future government.

In this Agreement, the Luxembourg government underlines its wish to maintain an attractive economic environment, including through a competitive economic and tax framework and significant investments in the country's infrastructure. The framework will encourage entrepreneurship and will enhance efforts aiming to diversify the financial market and the economy for the benefit of companies emerging from high-tech sectors. From a purely tax perspective, this Agreement which sets strategic goals until 2023, provides directions on individual taxes, corporate taxes as well as green taxes. 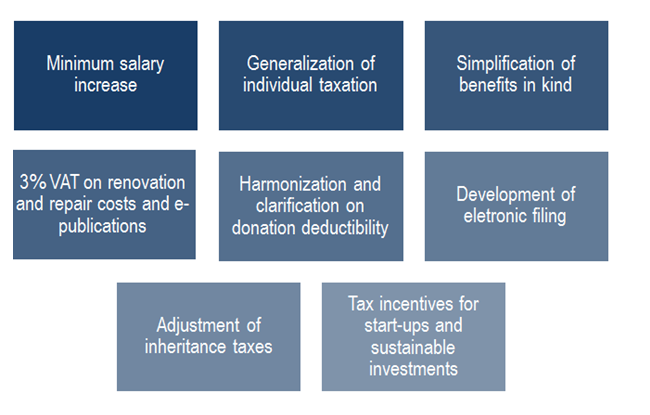 In addition to social equity measures composed of the minimum salary increase and the generalization of individual taxation, the Luxembourg government proposes to adjust to the virtual economy by applying the super-reduced VAT rate of 3% on electronic publications such as e-books and online press. It will also encourage various sustainable projects, through the application of the super-reduced VAT rate and the introduction of tax incentives. Furthermore, the government is willing to simplify the benefits in kind scheme by introducing among other things a lump-sum exemption amount. 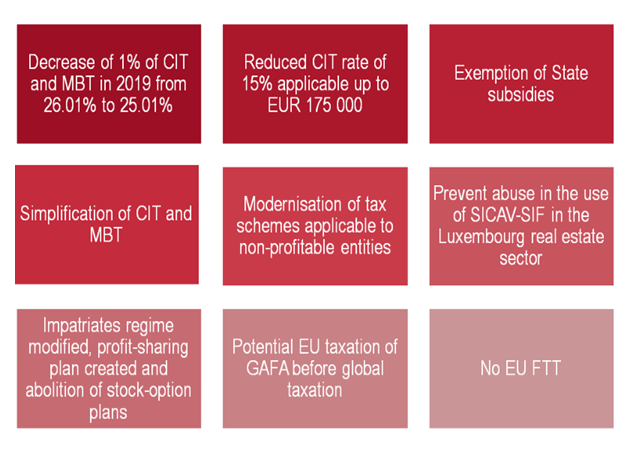 In accordance with Luxembourg's position on the international and European scenes, the government maintains its wish to implement the various provisions included in the Anti-Tax Avoidance Directives (ATAD), as well as in the Common Corporate Tax Base (CCTB) and Corporate Consolidated Tax Base (CCCTB) proposal Directives. Taking into account the need to maintain its attractiveness, the government proposes to decrease by 1% the aggregated rate of corporate income tax (CIT) and municipal business tax (MBT) in 2019, as well as to broaden the income range to which the lower range CIT rate of 15% applies (i.e. EUR 175 000).

The government also encourages a global solution at the level of the OECD in order to set the taxation applicable to the GAFA companies (Google Amazon Facebook Apple), but is not opposed to a European transitory taxation in the meantime. However, the coalition clearly rejects the introduction of Financial Transaction Tax at EU level, which could result in the transfer of activities outside the EU.

At the time of the Cop 24 (Conference of the Parties to the United Nations Framework Convention on Climate Change), which is currently taking place in Poland and to which Luxembourg is participating, the government takes position in favour of an ecological transition which requires the increase of taxes on polluting products and the decrease of taxation imposed on individuals.

Those measures announced and based on social equity, sustainable development and economic attractiveness will have to be further detailed through the relevant legislative procedure. Some measures, such as the decrease of the CIT and MBT rate will take effect as of 1 January 2019, but others will be implemented by 2023.