Trade mark owners should be aware of recent amendments to the New Zealand Trade Marks Act 2002 (TM Act), introduced under the Regulatory Systems (Economic Development) Amendment (No.2) Act. These changes, which came into effect on 13 January 2020, are summarised below.

The grace period to renew a New Zealand trade mark registration after its due date for renewal has expired (“expiry date”) has been reduced from 12 months to 6 months.

Any possibility of the New Zealand Commissioner for Trade Marks exercising discretion not to revoke a trade mark registration for non-use has been removed.

Previously, it was unclear whether the Commission had a residual discretion to allow a registered trade mark to remain on the Register, notwithstanding the trade mark owner failing to show the trade mark has been used or that there were special circumstances outside the owners’ control that prevented its use. For example, exercise of the discretion might have been appropriate, where the registered trade mark had had been used only for goods that were closely related to the registered goods. The amendment now makes it clear that there is no such discretion.

This contrasts with the position in Australia where the Registrar has a broad discretion.

The owner of a certification trade mark must not own another trade mark registration for the same goods and services.

Certification trade marks are used to indicate that goods or services have been “certified” as meeting a particular standard of quality or accuracy, have a particular composition, mode of manufacture, performance, geographical origin or some other characteristic. Approved users of a certification trade mark must follow a set of rules that ensure that their goods or services meet the certified characteristic and the owner of a certification mark is responsible for setting these rules and controlling the approved users’ compliance.

Examples of registered certification marks in New Zealand include:

To this end, new section 13A of the TM Act will now ensure that the registered owner of a certification trade mark cannot separately register a trade mark for goods or services of the same kind for its own use.

In other news, the New Zealand Intellectual Property Office (IPONZ) has announced reduced fees relating to pre-filing search and advice provided by IPONZ and the filing and renewing of New Zealand trade marks, which will apply after 13 February 2020. These reduced fees are set out in the following table. 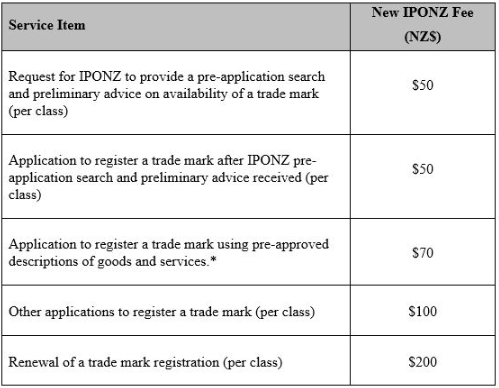 (These can be found on the IPONZ online classification tool at https://app.iponz.govt.nz/ipol/app/ui/services/preApprovedGS)