2019 has seen considerable focus on the taxation of the digitalised economy. Recent OECD proposals - the pillar one “unified approach” to profit allocation and nexus and introduction under pillar two of a globally-agreed minimum standard on direct tax matters – has the potential to fundamentally alter the international tax regime.

Building towards a consensus on the pillar one and pillar two OECD proposals is a significant challenge. Pending this, an increasing number of countries are taking unilateral action. This continues to attract attention. Just recently, the Trump administration made headlines by proposing the imposition of 100% tariffs on French cheese and champagne, in response to the recently introduced French digital services tax (“DST”) that it considers is unfairly discriminating against American-headed multinational technology companies. The UK has also adopted a DST to take effect from April 2020. This has not, as yet, attracted quite the same criticism from the US. Boris Johnson has reaffirmed his commitment to this, but it remains to be seen whether, depending on the outcome of the UK election, this could be a bargaining chip in US/UK trade negotiations in a post-Brexit UK.

Ed Denny and Bertrand Dussert consider and compare both the UK and French proposals below. Ed and Bertrand both joined the Winston & Strawn global tax team in 2019 as partners based in London and Paris.

Broadly, the issue relates to an observation, identified by the OECD in its 2015 BEPS Action 1 report, that current profit allocation rules, which focus on the right for countries to tax an enterprise where this has a physical presence in their jurisdiction, are ill-suited to a modern digitalised economy. This has led to a concern that multinational enterprises are increasingly able to shift profits to low or no tax jurisdictions.

In 2018, the European Union conceptualised an interim solution that would see a 3% DST applied on revenues derived from the sale of advertising space, digital intermediary activities such as online market places, and sales of user collected data.

Consistent with this type of approach, the pillar one proposals from the OECD focus on all “consumer-facing businesses” (not just “digital” businesses) and would broadly allocate more taxing rights to market jurisdictions, where customers and users are based. If a multinational enterprise “has a sustained and significant involvement in the economy of a market jurisdiction”, for example through consumer interaction and engagement, this may be sufficient to establish taxable nexus without a physical presence. Once a relevant nexus has been established (whether physical or by virtue of significant involvement), the rules would rewrite the profit allocation rules to determine how the profits of multinational enterprises should be allocated to different countries.

The outlines of a unified global approach, based on these proposals and the corresponding consultation, are expected by January 2020.

Interim solutions in the UK and France

In the absence of immediate measures taxing digital services at an international level, countries such as the UK and France have adopted unilateral tax measures, which are expected to be revoked upon emergence of international consensus.

An overview of each DST’s main features is set out below: 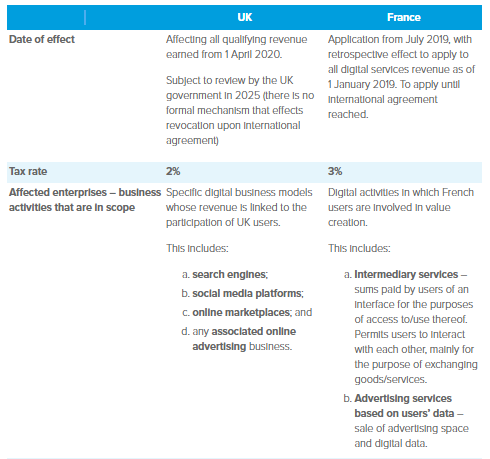 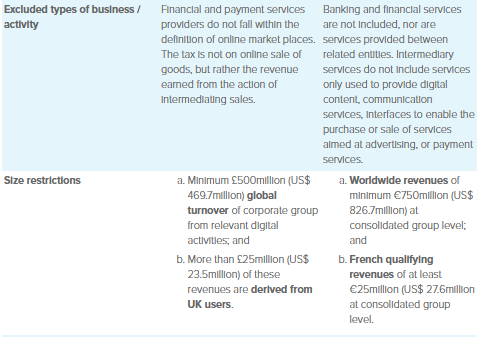 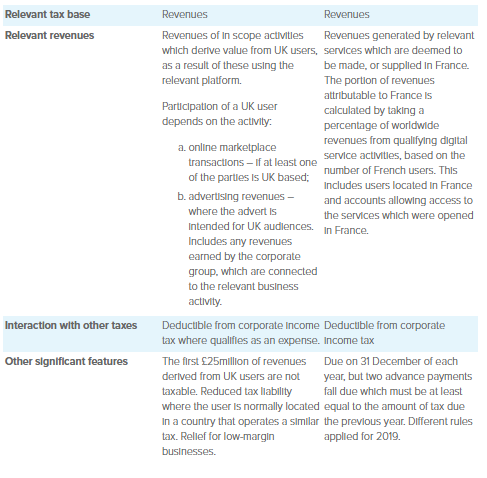