REAL ID and Enhanced Driver Licenses: Are TSA Agents As Confused As We Are?
Blog International Labor and Employment Law

I proudly presented my new ENHANCED driver’s license to the TSA agent at Newark International Airport with the comment that I am now ready for October 2020 when the new rules go into effect requiring the presentation of a REAL ID license to board an airplane for domestic flight. A regular license would no longer be acceptable, and without the REAL ID license, you would have to present a passport.

Imagine my surprise when the agent looked carefully at my license and advised “this is no good, you will have to get it changed, because it does not have the star in the upper right hand corner.” [It had a flag in the lower right hand corner].

I responded very respectfully that “I think you are wrong”, they probably just have not instituted the necessary training yet to confirm that “Enhanced Driver licenses” are in fact better than REAL ID licenses, as they are also acceptable identification and documentation for land and sea travel between the United States, Canada and Mexico. The agent grinned and shrugged his head.

The almost identical exchange took place when I was returning from Florida to the New Jersey area with a TSA agent at Fort Lauderdale International Airport.

Getting my Enhanced Driver License (EDL)

My odyssey began after being alerted through public announcements as to the need for REAL ID, prompting me to go to the website of the Department of Motor Vehicles for New York, where very clear instructions provided me with the option of “Get an Enhanced Driver License (EDL) or REAL ID”. The FAQ on the website read as follows:

What is an Enhanced Driver License (EDL)?

An Enhanced license (permit, or non-driver ID) is a New York State DMV issued document that you can use instead of a passport to return to the US by land or sea from Canada, Mexico and some countries in the Caribbean. New York’s EDL is compliant with the Western Hemisphere Travel Initiative (WHTI). 1 It is not acceptable for air travel between these countries. We recommend you contact your travel agent, your cruise line or the specific countries of destination to verify your travel document requirements.

An Enhanced license, permit or non-driver ID is Federal REAL ID compliant and is accepted to board a domestic flight (within the US), enter military bases, and certain federal facilities.

Only US citizens who are residents of New York can apply for a New York State EDL. 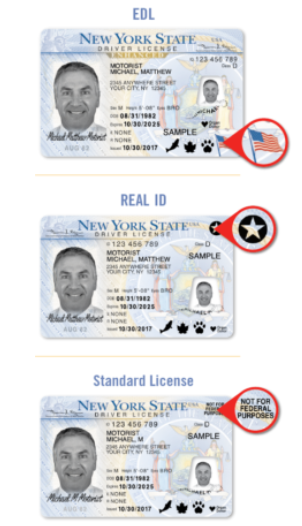 I thought this would certainly be a good deal for an additional $30.00.

I made an appointment, as instructed, ready with my U.S. passport; current driver’s license, birth certificate, recent bank statements and utility bills confirming my local address and, what I thought was my original Social Security card.

I made an appointment with the Social Security Administration office to request a new card, providing the same documents that I presented for my enhanced driver’s license!

Two weeks later, I had my social security card, made my appointment at the DMV, successfully completed the application process, and my enhanced driver’s license was issued.

After my exchanges at the airports in Newark and Fort Lauderdale, I went back to the TSA website under the heading REAL ID and discovered that, no surprise, my understanding of the requirements and that of the New York DMV was correct, as under the heading of “About Enhanced Driver’s Licenses”, the TSA site indicated as follows:

States that issued enhanced driver’s licenses are marked with a flag. These documents will be accepted at the airport security checkpoint when REAL ID enforcement goes into effect.”

Reaching Out To TSA

I was not going to leave this alone, so I took advantage of the TSA’s CONTACT facility to send a message and request under the category of “Request for Information”. This is the message I forwarded to them:

We have been doing some traveling, passing through TSA Security at Newark International Airport EWR and Fort Lauderdale, and none of the TSA agents seem to be aware that there is such a thing as an “Enhanced” driver license, which is just as good, if not better than a REAL ID license.

They seem to be of the opinion that only if the license is REAL ID and has a star in the upper right hand corner, does it fulfill the new requirement that goes into effect in October.

This is not my understanding and certainly it is clear under the DMV site for New York that the enhanced license is better, and I understand that the sign for it is the flag in the lower right hand corner.

Is this something that is going to be resolved by additional education as we get closer to October?

This could be a serious concern for those of us who have made an effort to obtain an “Enhanced” license.

I look forward to hearing from you.

Within days, I received a response, but it did not seem to address my concern and seemed to be a canned response. This is what I received:

All States and U.S. territories are compliant or have an extension for REAL ID enforcement. The extension dates vary by State. Unexpired IDs (including those marked “Not for Federal Use”) from all States and U.S. territories that are compliant or have extensions are acceptable at TSA security checkpoints. It is not necessary to renew these IDs early. To learn more about enforcement dates and extensions, please visit www.dhs.gov/federal-enforcement.

Beginning October 1, 2020, every passenger must present a REAL ID-compliant ID, or another acceptable form of ID, to fly within the United States. REAL ID-compliant licenses are generally marked by a star on the top of the card. If you are not sure if your ID is compliant, please check with your State driver’s license agency.

For more information and a list of frequently asked questions on REAL ID, please visit www.tsa.gov/real-id.

A friend of mine just asked me whether she should apply for a REAL ID license in New York or the Enhanced Driver License. I did not know what to tell her.