In Pavo Solutions LLC v. Kingston Technology Co., No. 21-1834 (Fed. Cir. June 3, 2022), the Court of Appeals for the Federal Circuit (“Federal Circuit”) affirmed a jury verdict in the Central District of California awarding $7.5 million in compensatory damages, enhanced by 50 percent, for willful infringement.

The patent at issue (U.S. Patent No. 6,926,544 (“the ’544 patent”)) describes a USB flash memory apparatus with a cover that protects the USB port from damage and foreign substances, as shown in Fig. 2. 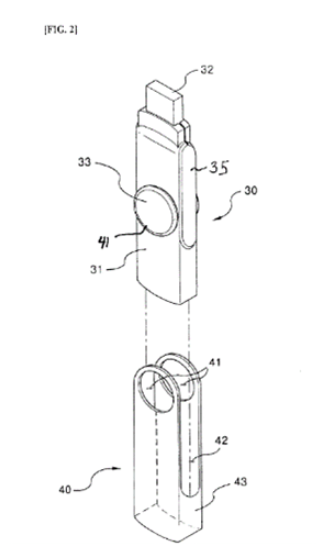 The ’544 patent purported to solve prior-art issues associated with detachable USB covers because they were often lost or loosened, causing damage to the USB port. The ’544 patent describes a cover that is “not completely separated from a main body so that loss of the cover is prevented.” ’544 patent Abstract. The “flash memory main body” contains a case with a “hinge protuberance.” Id. at col. 3 ll. 11-14. The open sides in the cover would allow the flash memory main body to be covered but not separated, thus solving the issues of loss or damage. Independent claim 1 of the ’544 patent, however, recited “the hinge protuberance on the case for pivoting the case with respect to the flash memory main body[.]” Id. at Claim 1 (emphasis added).

During claim construction, the district court found that the phrase “pivoting the case with respect to the flash memory main body,” had a clerical error and corrected the claim language by replacing the word “case” with the word “cover.” Pavo Sols., LLC v. Kingston Tech. Co., Case No. SACV 14-1352, 2018 WL 5099486, at *4 (C.D. Cal. Sept. 10, 2018) (“Claim Construction Order”). The district court determined that the error was “evident from the face of the patent” because the case was part of the main body and therefore would not be able to pivot. Id. Furthermore, “[t]he correction was not subject to reasonable debate . . . because Kingston’s proposed alternative construction—replacing ‘flash memory main body’ with ‘cover’ so that the claim reads ‘pivoting the case with respect to the cover’—resulted in the same claim scope.” Id. at *3. Additionally, the district court noted that the prosecution history was consistent with the correction, unlike Kingston’s expert testimony which was inconsistent with the intrinsic record. Id. at *4.

The jury found that Kingston infringed three claims of the ’544 patent that the PTAB upheld, awarding $7.5 million in damages, half of the damages that Pavo Solutions originally sought. The district court later added $3.8 million in damages to the jury award, along with $2.3 million in interest.

The Federal Circuit upheld the district court’s correction of “case” to “cover” in the claims. First, the error was an obvious minor typographical or clerical error because it was clear from the full context of the claim language and the specification. Under these circumstances, the district court properly corrected the claim language, even if the correction altered the claimed structure. Second, the Federal Circuit agreed that the correction was not subject to reasonable debate because both the district court’s correction and Kinston’s proposed correction would result in the same claim scope. Additionally, the Federal Circuit held that the prosecution history does not suggest a different interpretation of the claims because the applicant, the examiner, and the Board consistently characterized the claims as describing “pivoting the case [] within the cover” … “allowing the cover to pivot,” …and “a cover . . . having a hinge element functioning with the case,” despite the errors in the claims. Id. At *14.

This error in dependency of claim 22 is apparent on the face of the printed patent, and the correct antecedent claim is apparent from the prosecution history. . . . Absent evidence of culpability or intent to deceive by delaying formal correction, a patent should not be invalidated based on an obvious administrative error. . . . When a harmless error in a patent is not subject to reasonable debate, it can be corrected by the court, as for other legal documents.