A recent Law360 article explained that President Joe Biden’s executive order increasing the minimum wage to $15 per hour for federal contractors has an expected impact that is “likely to vary significantly by region, potentially making federal work less attractive for some companies in lower-wage areas.”[1] This executive order substantially increases the contractor minimum wage from $10.95 to $15 and will have a widely different impact across cities and states because wage rates for the same occupation vary substantially across areas. In contrast, a wage mandate indexed to local area pay rates would not have a substantially different impact across areas. The executive order could have indexed the contractor minimum wage to local area wages to mitigate the potential distortions of the executive order in lower wage areas. A precedent for indexing compensation rules to local pay rates is the federal government’s salary system that adjusts pay for inter-area private sector pay differences in white-collar occupations. In addition, prevailing wage rates (effective minimum wages) for the H-1B and H-2B visa programs are indexed to local area pay rates using similar methods and data to what is proposed in this article.

Wages and salaries for workers in the same occupation can vary considerably across local labor markets due to many legitimate factors including state and local tax rates and minimum wage laws, cost of living differences, and varying supply and demand conditions. For 27 years the federal government has paid different salaries to professional, administrative, technical, and clerical workers in the same occupation because they work in areas with different average salaries in the private sector (as measured by Bureau of Labor Statistics pay surveys). In January 1994 the federal government introduced a "locality pay adjustment" component to the General Schedule (GS) salary structure for white collar personnel. The federal government has established 53 different localities so that employees in the same GS grade and step can be paid different salaries due to the location of their place of work. 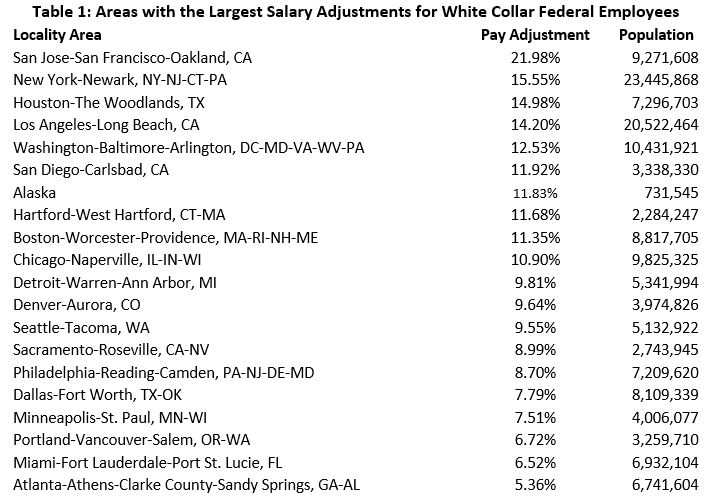 The White House announcement of the executive order mentioned that workers employed as janitors, cafeteria attendants, and nursing assistants are likely to be affected by the $15 minimum wage.[3] This is undoubtedly true because the median hourly wage rate, nationally, is below $15 for each of these occupations. More than half of employees in these occupations earn less than $15 and the cost of hiring workers for these jobs will increase if they were to devote sufficient time to federal contractor work.

Table 2 presents the average wage for nursing assistants, janitors, and cafeteria attendants in the 20 labor market areas with the highest average pay in these jobs.[5] San Francisco has the highest average wage rate, followed by Seattle, Honolulu, San Jose, and New York City. In these five metro areas the $15 minimum wage is between 17.3% and 27.1% below the average wage in these three service sector jobs. While the minimum wage in these metro areas will affect the lowest paid workers in these occupations, the executive order will have substantially less impact on businesses in these areas because many employees in these occupations already earn more than the mandated $15 wage. 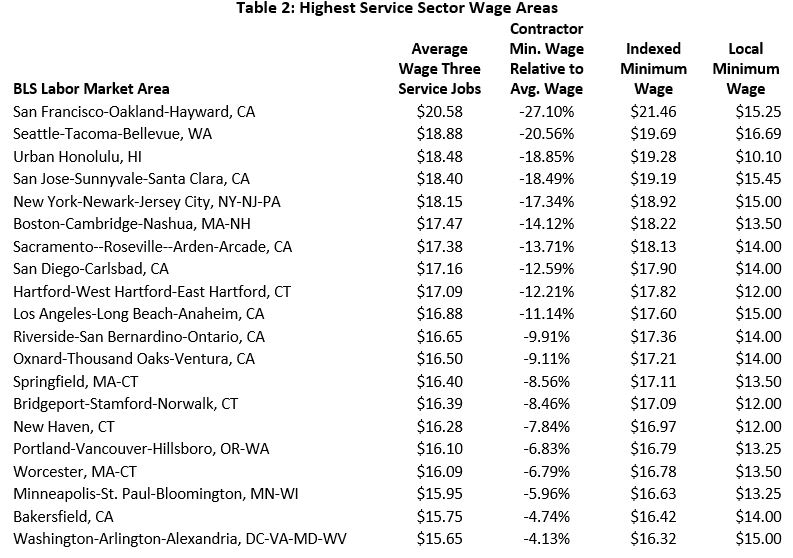 Table 3 presents the average wage for nursing assistants, janitors, and cafeteria attendants in the 20 areas with the lowest average pay in these jobs. Baton Rouge, LA has the lowest average wage rate, followed by McAllen, TX; El Paso, TX; Jackson, MS; and New Orleans, LA. Average wages in these jobs are 90% higher, on average, in San Francisco than they are in Baton Rouge. In these five metro areas the $15 minimum wage is between 32.7% and 38.5% above the average wage paid to workers in these three service sector jobs. The executive order will have an enormous potential impact on businesses in these lower-wage metro areas that employ workers in these occupations and choose to bid for work on federal contracts. Mandated wage increases of this magnitude are likely to be a substantial deterrent to businesses bidding for federal contract work in lower wage areas. 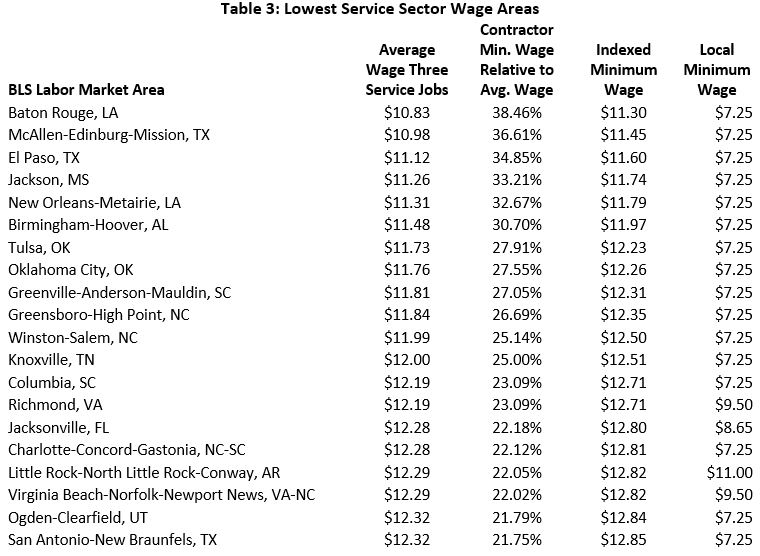