The ACCC has issued final Guidelines on how Australia’s competition laws will apply to intellectual property assignments and licences following the repeal of the ‘IP exemption’ from prohibitions on anti-competitive conduct which was contained in subsection 51(3) of the Competition and Consumer Act (CCA). Following a grace period, from 13 September the IP exemption will cease to apply.

However, certain worked examples remain undeveloped or unrealistic, such that uncertainties remain as to the ACCC’s likely approach in particular matters. The Guidelines do helpfully acknowledge and discuss threshold questions including as to when parties to an agreement will be considered to be competitors or likely competitors and the importance of the ‘with and without’ approach in considering the competitive effect of a licensing agreement.

Industries which rely heavily on IP rights, such as health, pharmaceuticals, biotech, IT, Fintech and telecommunications are most likely to be affected by this change.

Contraventions of Australia’s competition law carries significant consequences, including hefty penalties. In part, given legal uncertainly as to the scope of the IP exemption which limited reliance on its terms, the repeal is not expected to impact the majority of IP agreements. Nevertheless, increased risk is likely to result in increased compliance costs, as parties review both current and future arrangements with to ensure competition law compliance.

What does this mean for you?

There is no “grandfathering” of the current IP exemption – the removal of the IP exemption will apply to new and pre-existing arrangements in place from 13 September 2019.

To the extent that you have not yet considered the possible application of the removal of IP exemption to your arrangements you should do so as a priority and, if necessary, either terminate arrangements or negotiate amendments to ensure compliance. Going forward agreements will need to be more fully considered for potential competition law risks than was previously the case.

WHAT DID THE IP EXEMPTION PROTECT?

Subsection 51(3) provided a limited exemption relating to the licensing of IP rights from certain provisions of the CCA. The exemption applied to:

From 13 September 2019, to the extent that parties could otherwise have relied on the subsection 51(3) exemption, conduct including involving the licensing of intellectual property rights will be subject to:

APPROACH TAKEN BY ACCC IN THE GUIDELINES

Conditions attaching to licensed IP are often used as a tool by IP owners seeking to control the use of their IP assets. The Guidelines do not suggest that IP owners cannot control the use of their IP. However they highlight that greater care will be needed to consider the impact of the arrangements, especially where it could be considered that there are motivations beyond the protection of IP or where restrictions may be considered ancillary or collateral to the relevant grant.

As cartel conduct is strictly prohibited and subject to possible criminal or civil proceedings, the possibility of cartel conduct will be of particular concern to licensors of IP.

Most relevantly as it relates to the removal of the IP exemption, the CCA prohibits as cartel conduct competitors or likely competitors from making or giving effect to a contract, arrangement or understanding containing a provision which has:

The cartel prohibition only applies as between competitors or likely competitors. As such, a threshold issue will be when should a licensor and licensee be considered to be competitors, which may depend on whether the possibility of competition is contingent on the grant of the licence.

To its credit the Guidelines acknowledge this issue, noting ‘it is relevant to consider whether a firm could produce the goods or services, or substitutable good or services, prior to the licencing or assessment of intellectual property rights, or would be likely to do, or obtain the capacity to do so, but for the licence or assignment’. The example provided by the Guidelines, which considers the licensing of textbook copyright, notes the ACCC’s position that parties will be considered competitors where they supply substitutable products, even where they cannot supply the particular product in question absent the relevant licence.

The Guidelines also contain worked examples of possible Price Fixing, Output Restrictions and Market Sharing conduct. Of particular interest is the ACCC’s example of a collaboration agreement supported by cross-licensing in circumstances where the parties agree that one party will have the right to commercialise the results of the research for a particular field and the other party will have the rights to commercialise the results for another field. Assuming that the competition condition is satisfied, the ACCC notes that, in considering the purpose of a provision, it will consider a variety of factors, including the commercial rationale of the parties.

In this respect the ACCC seems to accept that the form of a restriction does not, necessarily, reveal the purpose of a provision. As such, it should not be assumed that a provision which limits the territories in which a licensee may supply goods would have a market allocation purpose. A broader investigation of relevant circumstances should be required including whether restrictions enhance production and supply which, in turn, may require the consideration of whether, in the absence of the relevant restriction, any licence would be granted.

From 13 September 2019, to the extent that parties could otherwise have relied on the subsection 51(3) exemption, conduct including involving the licensing of intellectual property rights will also be subject to:

In considering whether or not there could be a substantial lessening of competition the ACCC notes that it will apply a ‘with or without’ test. This may involve the comparison of a situation where there is a licence in place with the relevant licence condition, to the one where there is no licence at all. That is, the Guidelines recognise that the commercial position may be such that the licence may not be offered absent the condition and, accordingly, the grant of a licence subject to conditions will allow for a greater exploitation of IP rights than would occur absent the licence. In such circumstances there should be no substantial lessening of competition.

The Guidelines provide a number of examples which seek to shine light on the likely ACCC approach to IP related issues and the possibility of a substantial lessening of competition. Somewhat surprisingly, in many examples outlined in the Guidelines, the ACCC is of the view that the 51(3) exemption would not have applied in any event and, as such, the law and the ACCC approach is unchanged. 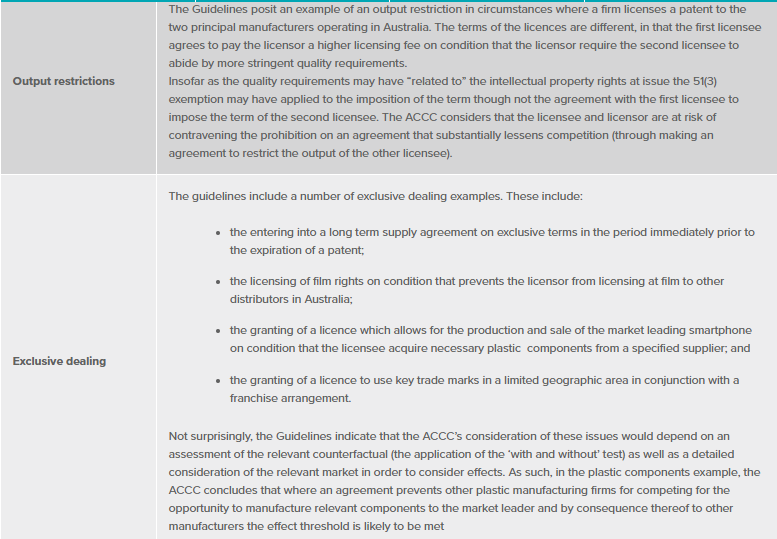