Board Diversity and the Skills Matrix

In September 2017, the New York City Comptroller (NYCC) launched the Boardroom Accountability Project 2.0 – an initiative that was designed to put pressure on large public companies to “refresh” their boards to make them “more diverse, independent and climate-competent.”

The initial phase of the Boardroom Accountability Project, launched in 2014, focused on bringing proxy access to the mainstream, and, coupled with significant support from other institutional investors, fueled the dramatic increase in the adoption of proxy access by-laws over the last three years. The second phase, which focused on those companies that had adopted (or will soon adopt) proxy access, was designed to use the threat of proxy access to force companies to engage in a discussion on board diversity.

In connection with the second phase, the NYCC sent letters to the chairs of the nominating and governance committees of 151 U.S. public companies asking them to:

A large percentage of the companies engaged with the NYCC on board refreshment and many committed to make changes to their disclosures. And there was little likelihood that they would not. The NYCC’s request for a director skills matrix as a tool to promote diversity had broad support among other large public pension funds – eight of them signed a petition asking the SEC for a rule requiring one. Additionally, the prospect of a shareholder proposal or, even worse, a “vote against” campaign directed against nominating and governance committee directors was not something many wanted to take on. The NYCC actually did submit shareholder proposals in 2018 to six targeted companies requesting they include a directors’ skills matrix in their proxy – the NYCC withdrew five of those proposals when the companies agreed to disclosure changes.

In June 2018, the NYCC announced the results of this second phase and claimed victory. According to the NYCC, 85 of the 151 companies “adopted improved processes and increased transparency regarding board quality, diversity and refreshment” and that the activities of the NYCC are “changing boardroom culture” that is “leading companies to cast a wider net for directors without sacrificing quality.”

In the case of the proxy access effort, success was not only evidenced by the adoption of proxy access by those companies that were targeted by the NYCC but, more significantly, by the number of companies that adopted proxy access in response to a recognition that the tide had changed – proxy access had become a governance best practice to the largest institutional investors.

Will the director skills matrix become a proxy disclosure best practice? The NYCC appears to be pushing it. The NYCC believes it was successful in getting more than half of the targeted companies to improve their disclosures and it is ready to use shareholder proposals (or the threat of one) to push more companies for enhanced disclosure.

The real message for boards, however, is the importance of board refreshment and demonstrating to shareholders that meaningful progress towards achieving diversity on the board has occurred. And it is not just the NYCC pushing for results. Companies are receiving shareholder proposals that would require the board to include qualified women and minority candidates in the list of possible director nominees. And, in the face of consumer, employee and investor reactions to board diversity issues, companies are finding it very difficult to oppose such shareholder proposals. The largest institutional investors have also been increasingly flexing their muscles on board diversity. BlackRock and State Street, for example, actively support shareholder proposals targeting board diversity, such as proposals seeking board reports on efforts taken to nominate diverse candidates to the board. Equally as important, nominating committees that are not making progress towards refreshing their boards with diverse director nominees have seen votes against their members in annual director elections. The proxy advisory firms, Glass Lewis and ISS, have also spoken more forcefully about the importance of boards taking affirmative steps to address diversity on the board. In fact, Glass Lewis has stated that beginning in 2019 it will recommend a vote against the chair of the nominating committee for larger companies with no female directors. Gender diversity is also being fueled by state legislative actions proposing quotas for female representation on the board. 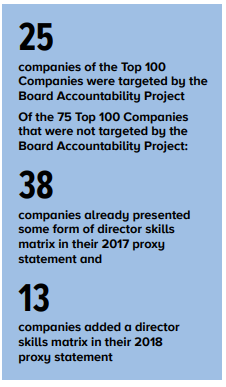 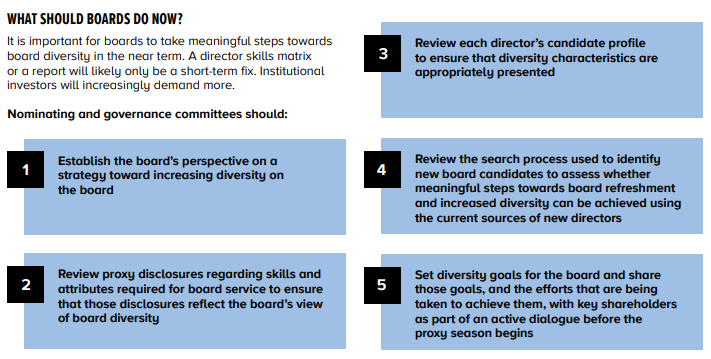