In preparation for what many now see as being the most likely outcome, the UK Government (Government) has published its guidance on how disputes will be dealt with in the event of the UK exiting the EU without it first having agreed a framework with the EU for ongoing civil judicial cooperation.

If the UK exits Brexit on a "no deal" basis, from 11pm on 29 March 2019 the transition arrangements keeping the status quo until at least the end of December 2020 will not apply.

"Where proceedings have already commenced, parties should ensure that they serve proceedings as soon as possible to make use of the service conventions."

The Government's guidance is entitled: Handling civil legal cases that involve EU countries if there's no Brexit deal and is available at https://www.gov.uk/ government/publications/handlingcivil-legal-cases-that-involve-eucountries-if-theres-no-brexit-deal/ handling-civil-legal-cases-thatinvolve-eu-countries-if-theres-nobrexit-deal. The guidance and its implications for EU parties engaging in disputes, or for those considering using an English law and jurisdiction clause are the subject of this briefing note, which is an update to our Brexit Disputes Considerations article, available at: http://www. hfw.com/downloads/HFW-BrexitConsiderations-Dispute-ResolutionFeb-2018.pdf.

What does a "no deal" Brexit mean for disputes?

It should be remembered that Brexit will only affect those suing under an English law and jurisdiction clause involving parties based in the EU, or with attachable assets in the EU. It will therefore only impact upon a small percentage of the disputes involving the English courts, and (for the reasons given below) will not impact at all on parties who have elected to resolve their disputes via arbitration.

As discussed in our Brexit Disputes Considerations, choice of jurisdiction, service, and enforcement are likely to be most affected by Brexit, this is because of the number of reciprocal conventions and regulations the UK (and therefore England and Wales) have in place with the EU.

In the guidance paper the Government makes clear that it will “repeal most of the existing civil judicial cooperation rules and instead use the domestic rules which each UK legal system currently applies in relation to non-EU countries, [and] would retain elements of the current EU rules, where they either do not rely on reciprocity to operate or where they currently form the basis for [the UK’s] existing domestic or international rules.”

Arbitration is likely to be a preferred choice for many as the New York Convention 1958, to which over 150 countries are signatories (including the EU member states), provides for an agreed process for enforcement of convention country arbitration awards, thereby eliminating the potential service and enforcement issues which may be encountered post-Brexit.

It still remains unclear as to whether an exit deal will be agreed between the UK and the EU. However, parties wishing to include an English choice of law and jurisdiction clause and who are engaged in pre-contract negotiations would be well advised to consider whether arbitration should be the preferred method of dispute resolution, and should include a clause enabling the choice of jurisdiction to be reviewed post-Brexit.

Parties who are now engaged in a dispute would be well advised to seek to agree resolution via arbitration, if at all possible; or to commence proceedings before 29 March 2019, thereby helping to secure the benefit of the service conventions and regulations. This may mean negotiating a variation of what was previously agreed.

Regardless of what the future holds for individual conventions and regulations, English law and jurisdiction will continue to remain a significant choice for many engaging in disputes.

For more information on Brexit go to www.hfw.com/Brexit.

Table of the key conventions and regulations applicable to interEU disputes and the impact in the UK of a "no deal". 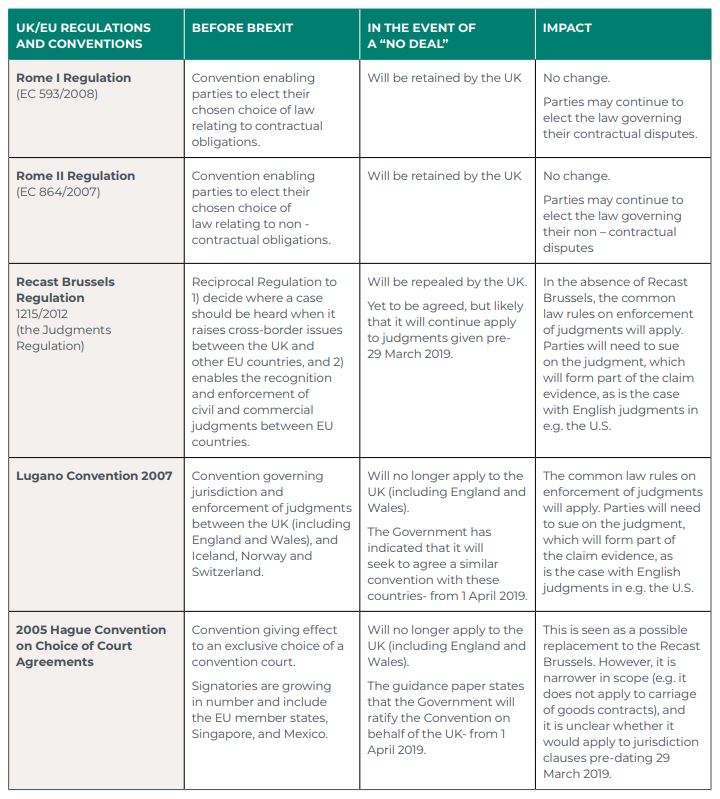