All over takeovers: Developments since 1 October

The applications considered by the Takeovers Panel (Panel) since 1 October 2018 touch on a range of aspects of takeovers law and practice in Australia, including disclosure in target’s statements, as well as in relation to other control transactions. This article explores issues raised by the applications, and the relationship between the Panel and ASIC, particularly the role of ASIC in assisting with the implementation of the Panel’s orders. It also provides an update in relation to ASIC’s position on stub equity.

The applications considered by the Panel in the last 3 months have predominantly centred on disclosure. The Panel’s consideration of these matters is depicted in the table and key themes arising from the applications are explored below. 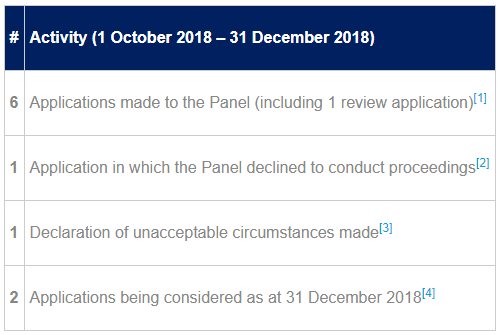 In our October 2018 alert, we discussed a number of applications made to the Panel related to alleged deficiencies in disclosure for resolutions to approve rights issues. One of these applications was Bullseye 02, in which we reported that the Panel had accepted an undertaking to withdraw resolutions from the shareholder meeting seeking approval for the issue of convertible notes and the grant of an option to provide funding against the background of a third party takeover. The Panel has since made a declaration of unacceptable circumstances, final orders and accepted a further undertaking – all relatively unusual steps following the Panel accepting what was essentially a “final” undertaking in relation to a matter, but explicable by reference to this matter.

Bullseye Mining Limited (Bullseye) proposed to (in circumstances in which Red 5 Limited had announced its intention to make a takeover bid for Bullseye):

The Panel was concerned with the disclosure to shareholders and that, with the withdrawal of the resolutions from the shareholder meeting (consistent with the undertaking), Bullseye may not put the 2 transactions to shareholders. The transactions, in the Panel’s view, would have a control effect, as they would:

The Panel considered the notes were likely to have a chilling effect on control transactions for Bullseye and could have a coercive effect on shareholders.

The Panel made a declaration of unacceptable circumstances and orders that prohibited Bullseye from issuing the notes without first obtaining shareholder approval. The shareholder approval must be obtained in the manner prescribed by the Panel, namely:

Bullseye 02 is a reminder that, while a board may wish to take defensive action in relation to a takeover, it needs to take care to consider the interests of shareholders in a proper manner (including by ensuring an independent board committee is formed, if appropriate) and to comply with its broader obligations such as in relation to related party transactions and the provision of financial assistance. A defensive capital raising such as that proposed by Bullseye is likely to invite the intervention of the Panel.

Also in our October 2018 alert, we reported on the declaration of unacceptable circumstances and interim orders made by the Panel in relation to the affairs of Tribune Resources Limited (Tribune). The Panel concluded that false responses had been provided to tracing notices and that there had been numerous contraventions of the substantial holder provisions, including such that one individual had voting power of 60.49% in Tribune.

The order that the shares be vested in the Commonwealth brings into play the role of ASIC and the interrelationship between ASIC and the Panel. The Panel is generally reluctant to oversee (and therefore make) orders that require compliance or action for any extended period of time (it is ultimately a decision-making body rather than an enforcement agency), however it appears to be increasingly engaging ASIC – through the orders the Panel makes – to assist with the implementation of orders. With the vesting of the shares in the Commonwealth, ASIC is (in this case) required to:

While these orders will allow ASIC to recover its costs in relation to the vesting of the shares, ASIC was also required by the orders to review the draft corrective substantial holder notice to be provided. The corrective disclosure must be made once ASIC is satisfied with the form and information in the notice.[9] ASIC submitted that it should receive “compensation” (as opposed to a costs order) for its oversight of the drafting of the corrective disclosure. While the Panel considered it had power to make orders of that kind, it was not satisfied that this was an appropriate case.[10]

With ASIC’s new fees-for-service cost recovery funding model, we think it is likely that ASIC will continue to make submissions urging the Panel to order the relevant party to a matter to pay ASIC’s costs or to compensate ASIC for overseeing the implementation of the Panel’s orders. In the longer term, we query whether this will go the way of ASIC’s other services such that ASIC will eventually require payment (through its own legislative framework) to assist with the implementation of the Panel’s orders. This will be an additional consideration for any shareholders (or other market participants) the subject of an application to the Panel.

Two applications were made to the Panel in the fourth quarter of 2018 for a review of an ASIC decision.[11] The Panel had considered only 20 such applications under s656A(1) of the Corporations Act 2001 (Cth) (Act) in its 27 year history.[12] These 2 applications were made by 2 target companies in relation to separate takeover bids by John Bridgeman Limited and were related to similar facts. The targets, Benjamin Hornigold Limited and Henry Morgan Limited, sought review of ASIC’s refusal to grant relief to extend time for the dispatch of their target’s statements and, in the alternative, permit them to lodge incomplete statements.

The Panel conducted a de novo review of ASIC’s decision on the merits and affirmed the decisions of ASIC to refuse relief. The Panel was not satisfied that the delay in preparing the target’s statements was beyond the control of the applicants. The Panel considered it relevant that the targets had agreed to early dispatch of the bidder’s statements, leaving the targets and the expert less time to consider those statements, and that the bid implementation agreements set out an agreed timetable.[13]

This takeover bid has been the subject of further applications from shareholders alleging (among other things) that the takeover bids are not able to take place in an efficient, competitive and informed market, that the structure of the bids frustrate the policy of Chapter 6 of the Act and that the circumstances surrounding each bid are coercive.[14] The Panel has made interim orders in relation to these applications (preventing the bidder from processing any further acceptances received under the bids) and is still considering the applications.[15]

ASIC has recently advised[16] of its intention to issue a consultation paper in early 2019 seeking views on a proposed legislative instrument to modify s708 of the Act to prevent bidders offering consideration that includes stub equity in Australian proprietary companies. This structure involves scrip (being shares in a proprietary company) consideration for the control transaction being issued by a bidder to a nominee or custodian, where the nominee or custodian holds the shares for the member of the target entitled to receive the scrip consideration under the control transaction.

ASIC is concerned that the structure is used to avoid the restrictions on proprietary companies from:

This structure was used by a consortium comprised of private equity fund Wattle Hill and investment manager Roc Partners to implement a scheme of arrangement for Capilano Honey Limited.[17] ASIC declined to provide a “no objection” letter for the purposes of s411(17) of the Act and submitted that the policy underpinning the relevant provisions of the Act is that additional protections are required when shares are widely held compared to a closely held company because where shares are widely held there may not be the same degree of knowledge, oversight and involvement by shareholders.[18]

While Justice Farrell found the use of the proprietary company and custodian arrangement troubling,[19] she was not satisfied that, as a matter of fairness, the public policy basis of ASIC’s concerns outweighed the commercial judgement applied by shareholders of Capilano Honey Limited as those shareholders made their judgement with the benefit of full disclosure and without oppression,[20] particularly in circumstances where there was a cash alternative that shareholders could have elected to receive and that cash alternative was greater than the equivalent value of the scrip consideration being offered.[21]

Justice Farrell also considered that “where investors in a private equity vehicle are sophisticated investors (both in the sense recognised by the Corporations Act and in fact) it is difficult to see why this model should not be adopted”.[22] We agree with this and – while we acknowledge and agree with ASIC’s concerns in relation to retail investors – we would see utility in modifications to the regime such that it enables stub equity offers to be made only to sophisticated (substantial and/or institutional) shareholders, without this giving rise to the current issues of class rights (in schemes of arrangements)[23] or collateral benefits (in takeovers).[24]

In the interim, ASIC has stated that it may consider making individual instruments to prevent these offers where the control transaction is announced prior to the conclusion of its consultation.