In Shnuggle v Munchkin, the Intellectual Property Enterprise Court (IPEC) of England & Wales has found that Munchkin did not infringe Shnuggle’s registered Community designs and unregistered UK design rights by importing and selling its baby bath, the Sit & Soak, into the EU and UK respectively.

Shnuggle claimed one unregistered design right (UDR) in the MK1 and five UDRs in the MK2. In each instance, the design was to an element of the MK1 or MK2. This element was denoted by identifying on the design those elements which were excluded from the design. An example is depicted below. Importantly, elements of the MK2 were copied from the MK1.

In October and November 2017, Munchkin designed the Sit & Soak. During the design process, the MK2 was a point of reference. The Sit & Soak is depicted below. 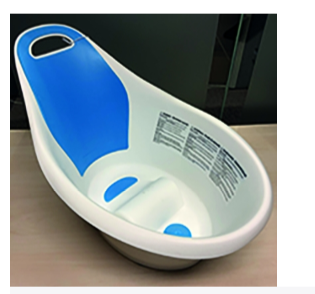 In advance of the Sit & Soak launching in the UK, Shnuggle commenced proceedings against Munchkin alleging infringement of the two RCDs and six UDRs.

In relation to RCD ‘196, the court held that (while valid) it was not infringed. The judge, Her Honour Melissa Clarke, considered that the following differences would be identified by the informed user:

In relation to RCD ‘763, the court held that this was invalid because it lacked individual character when compared to RCD ‘196. In any event, it was not infringed because the Sit & Soak gave a different overall impression to the informed user for the same reasons as RCD ‘196.

Regarding the UDRs, three of the six lacked originality as the elements which were denoted in the MK2 designs were copied from the MK1. Of the remaining three designs, two were commonplace but the third was not (being commonplace at only a high level of generality). In relation to the latter design, while there had been indirect copying, the Sit & Soak did not produce it exactly or substantially.

In addition to the above, Munchkin sought to argue that the UDRs did not subsist because they were not a “part” of the article. In particular, Munchkin submitted that each was an “aspect” of the shape or configuration of the whole or part of an article and, as a result of the change in law by the Intellectual Property Act 2014 (which excised design protection for “aspects”), they were precluded from subsisting.

The court rejected the submission. Having summarised the law, HHJ Clarke applied it to the facts, holding: “I am satisfied that each of the designs is for an actual not abstract part, or concrete part, of the relevant bath. I do not think the arbitrariness or otherwise of a line indicating what is excluded is what dictates whether a design is a concrete or actual part on the one hand or abstract on the other. The issue is whether it is an actual part of the article and whether it can be identified as such. The pink [red] colour is also virtual and arbitrary, but the colour and lines together identify clearly what is excluded and what is not.”