2018 marked one of the busiest fiscal years (“FY”) at the International Trade Commission (“ITC”). The agency did not receive the record number of filings that it was nearly on pace for halfway through FY 2018, but it did break its record for number of active investigations. A total of seventy-four (74) new complaints were filed in FY 2018. Sixty-one (61) investigations were completed during the same period. Accordingly, the number of active investigations increased from 117 to 130, representing the highest number in the ITC’s history. This record previously stood at 129, which was reached in both FY 2011 and FY 2012. 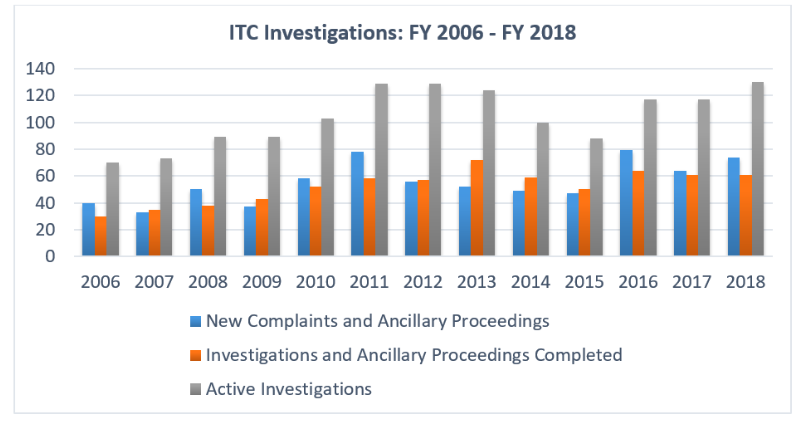 While these statistics reflect that the ITC continues to be an attractive venue for IP litigation, we also expect to see significant statistical changes in FY 2019 due to the government shutdown. Following the government shutdown, the ITC began 2019 with disruptions to section 337 proceedings. A notice (here) posted on the ITC website provides information about the ITC’s shutdown plan. The website also indicates that the ITC’s Electronic Document Information System (“EDIS”) is operating in a read-only capacity and document filing is disabled. Because the ITC will not accept new complaints until appropriations are allocated, it is possible that a record number of complaints could be filed shortly after EDIS becomes operational. Further, the extended period without investigative activities will likely lead to fewer completed investigations in FY 2019. Therefore, it is still possible that FY 2019 will be a busier year than 2018 but it is unlikely that the ITC will be able to complete as many investigations in FY 2019 as it did last year.