The Hong Kong Stock Exchange (the “Exchange”) announced its decision to re-position the Growth Enterprise Market (GEM) as a standalone board for small and mid-sized companies and set out related listing rules amendments in its recently published consultation conclusions (“GEM Consultation Conclusions”) on the “Consultation Paper on the Review of the Growth Enterprise Market and Changes to the GEM and Main Board Listing Rules”.

The revised GEM Listing Rules and Main Board Listing Rules will become effective on 15 February 2018. This article summarises the key changes.

To highlight its new role as a standalone board for small and mid-sized companies, the names “Growth Enterprise Market” and“創業板”will be changed to “GEM”.

To improve the overall standard and quality of companies seeking to list on GEM, more stringent requirements are to be imposed: 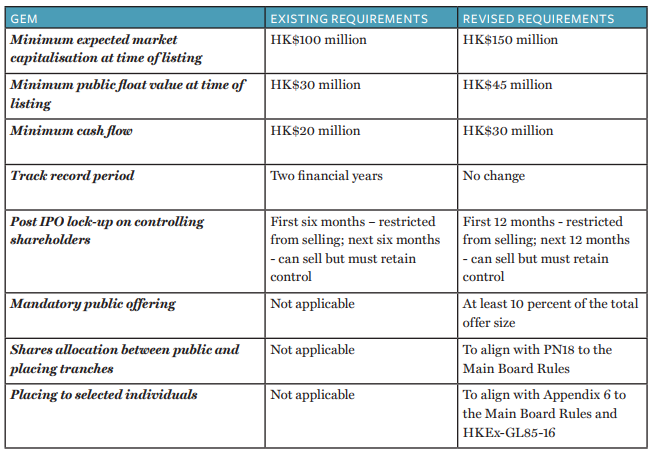 GEM was once positioned as a “stepping stone” to the Main Board in order to provide a channel for smaller companies that had grown and developed in size and maturity while on GEM to list more easily on the Main Board. With the re-positioning of GEM as a standalone board, the Exchange decided to remove the streamlined process introduced in July 2008 whereby GEM issuers can transfer to the Main Board if they meet the Main Board admission requirements, without the need to appoint a sponsor and to issue a listing document (“GEM Streamlined Process”).

In other words, after the transition period of three years from 15 February 2018 (the “Effective Date”) applicants applying for a transfer of listing from GEM to the Main Board (“GEM Transfer”) will be required to appoint a sponsor to conduct due diligence and publish a listing document to list on the Main Board. However, certain facilitating measures for GEM Transfer applicants under the new process will be provided, including dispensation with certain documentary requirements, exemptions from the requirements on post-IPO lock-up, restriction on fund raising and appointment of compliance adviser.

As for GEM Transfer applications submitted before the Effective Date, they would be processed under the GEM Streamlined Process. Applications made during the three-year transition period will all be required to appoint a sponsor, but applicants that have changed their principal businesses and/or controlling shareholders since listing on GEM will be required to publish a listing document as a new listing applicant to the Main Board; while those with no changes will only need to prepare a GEM Transfer announcement. 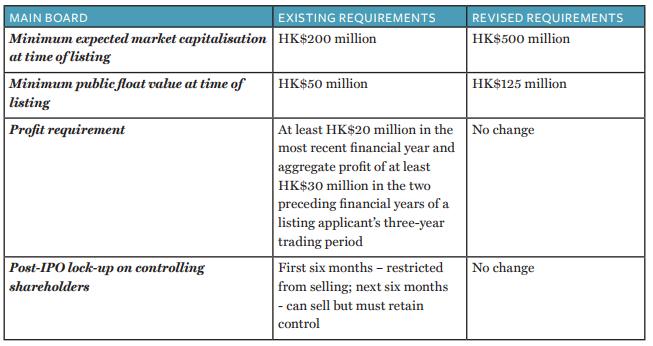 Details of the above proposals are set out in the consultation conclusions released on 15 December 2017, which is available on the HKEx’s website.