Headstock in the clouds? Don’t fret (just yet)

Paul Reed Smith Guitars’ (PRS) trade mark for a guitar headstock was held to be non-distinctive by the Board of Appeal. Trade marks which consist of part of the goods themselves are notoriously difficult to register. A filing by PRS is off to a rocky start, but if acquired distinctiveness can be shown, registration may still be possible. 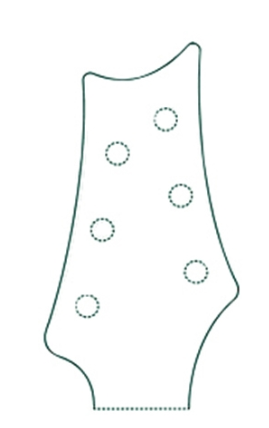 At first instance, the EUIPO refused the application as it was considered to be non-distinctive under Art 7(1)(b) EUTMR. The EUIPO considered the mark to be a representation of a guitar headstock which was not markedly different from those of other guitar manufacturers.

PRS appealed the decision to the Board of Appeal arguing that the relevant consumer should not be defined as the “general consumer”.

Guitars are not everyday items but rather specialised goods advertised at a specific and narrow consumer group. Further, the price would mean that the relevant consumer would pay a high degree of attention when purchasing the goods. (Take note, humble beginner!)

The Board of Appeal countered all of these points. Guitars range from very cheap to very expensive with the former costing as little as EUR50. Even if a guitar is not a product purchased on a daily basis, the attention of the public is not necessarily higher than average on that basis. In any event, the conclusion as to whether the mark was distinctive would not turn on whether the relevant consumer’s attention was high. The Board of Appeal also noted that price and the concept of “luxury” depends on the marketing strategy of the proprietor, and could be subject to change. Hence, price could not be a determinative factor for the purposes of deciding the distinctiveness of the mark.

PRS argued that it is common for leading guitar manufacturers to use guitar headstocks as indicators of origin (the shape dictating the particular manufacturer). PRS claimed that consumers would recognise various guitar brands given their different headstocks, noting that each manufacturer would use a shape consistently across their different models (e.g. acoustic guitars and electric guitars). Whilst a manufacturer may use various logos on their headstocks, the shape would be consistent. This, according to PRS, was an important indicator as logos and other trade marks may not be visible from a distance (e.g. in shop windows or in a concert hall). PRS also submitted evidence showing examples of headstocks of other manufacturers, arguing that they differed significantly from the shape covered by the application. In other words, the mark applied for was a departure from the norms/customs of the trade.

The Board of Appeal dismissed PRS’ arguments. Consumers do not tend to make assumptions about the origin of goods based on shape alone. In practice, this means that a consumer must be educated that a particular shape is associated with a specific company/manufacturer.

Whilst consumers may be able to distinguish different headstock designs, it did not necessarily mean that they would assume the guitars had different commercial origins. It was held to be irrelevant that high-end guitar manufacturers use the shape of headstocks as identifiers (intending them to be indicative of origin). The relevant consideration was the perception of the general consumer.

The Board of Appeal also noted that PRS had not provided any arguments as to why the general consumer would recognise the commercial origin of a guitar based on its headstock. The market for simple, lower price guitars in terms of guitars sold is much bigger than the market for higher-end versions (even though the turnover for the latter may be higher).

The appeal ultimately failed and the case has been sent back to the EUIPO examiner so that the subsidiary claim of acquired distinctiveness can be considered.

The headstock shape was not markedly different from basic headstock shapes commonly used in trade, but was simply a variation of them. Thus, if PRS wants to obtain a registration, it will need to provide evidence that the shape has acquired distinctiveness – i.e. that consumers recognise the headstock shape as indicating goods originating from PRS.