1 Article 24(3) was known as mandatory indemnification provision. It imposed mandatory obligations on foreign technology owner to indemnify the Chinese party (be it as a licensee, assignee, or joint venture partner) against infringement risk of third party IP rights.

3 Article 29 set out the prohibited terms to a technology import contract. Article 29(3) mirrored Article 27, and prohibited any term which restricts the licensee of the technology from using the improvements it develops.

TIER has been a subject matter of much debate between the US, China, and EU over the years, largely because the above three restrictions do not exist in technology export contracts, nor domestic technology transfer contracts. The amendment is a welcome change for both foreign and domestic tech companies.

The 2002 version of TIER was an administrative measure which protected the Chinese party to a cross border technology import transaction, perhaps envisaging a scenario where an all powerful foreign tech giant commissioned a small Chinese factory to manufacture its products. In the past few years, China has become much stronger and has actively invested in techology. The bargaining powers of the two sides to a tech transfer transaction are guided by their commerical positions. It is now the case that the Chinese party more often has greater financial power. Those provisions in TIER may deter foreign universities or technology start-ups from transferring the technology into China because they could not afford to give those mandatory indemnities to more powerful Chinese counterparts which would ramp up the scale of commercial exposure. Some technology owners decided to assume the risk and went ahead. A number of transaction structures were devised to minimise the risk in the process, but each came with additional contract arrangement, enforcement risk and tax exposure.

With the removal of the three provisions, tech companies can now negotiate and allocate risk in these aspects by contract. The amendments to TIER closely follow the overarching principle set out in the new Foreign Investment Law passed three days prior, on 15 March 2019. Article 22 states "China encourages technology cooperation based on voluntarily agreed terms and business practices in the process of foreign investment. The terms of technology cooperation shall be negotiated by investors on the basis of fairness and equality. No administrative authorities and their officers shall force technology transfer by implementing any administrative measures". The Foreign Invesment Law is to be implemented from 1 January 2020. This also follows the national strategy to encourage technology transfer into China, an area which has seen exponential growth under active government intiatives.

It is also worth noting that in negotiating a global technology transfer project, there are still China specific provisions to localise. For example, Article 25 of TIER remains intact. Article 25 requires the foreign tech importer to guarantee that the technology is complete, effective, and error free, and is able to achieve the goal agreed in the contract. Similar wording is also found in Article 349 of the PRC Contract Law and is, in fact, one of the commonly invoked provisions in a technology dispute, and thus warrants thoughtful drafting. Also, there are provisions in the PRC Contract Law and Anti-Monopoly Law which may be applicable. Companies should pay attention to those provisions in allocating improvements rights and avoiding anti-competitive terms (see Table below). Further, the existing regulation and approval procedure relating to technology export, especially in integrated circuits, big data, and computer software industry is also an area which is increasingly regulated and requires careful compliance.

The chart below summarizes the provisions that were deleted from TIER against the still effective Chinese laws on the same issues: 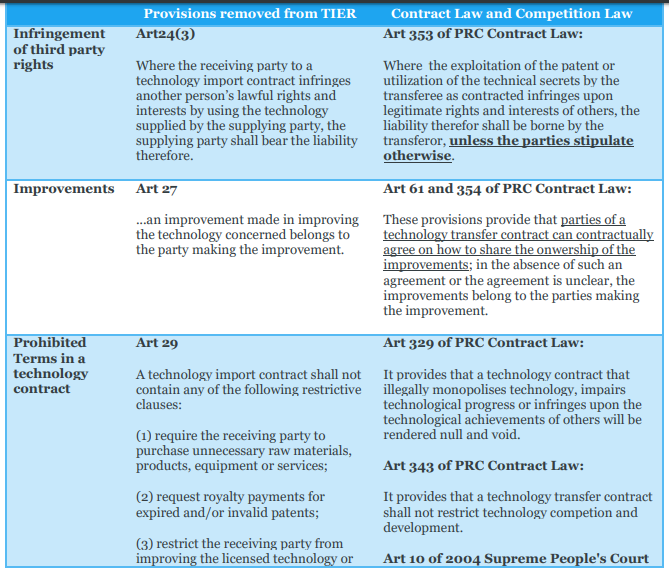 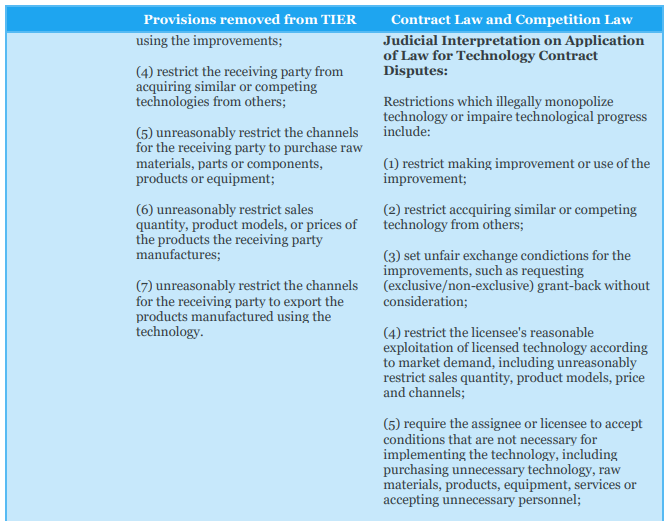 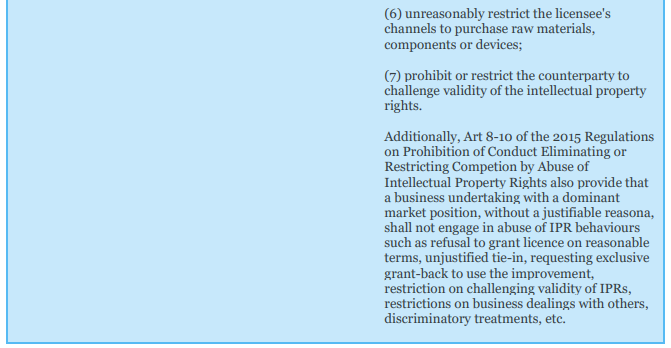