At the end of January 2018, President Trump will decide whether to impose tariffs and quotas on imports of solar cells and modules, as the US solar industry braces for the worst, and continues to lobby against the recommended tariffs.

On November 13, the US International Trade Commission (ITC) submitted the statutorily required report to President Trump detailing the commission’s findings and conclusions resulting from the Section 201 safeguard investigation of crystalline silicon photovoltaic (CSPV) cells and modules. Having concluded in the first phase of its investigation that increased imports of CSPV cells and modules were the cause of injury to US producers of those products, the four sitting commissioners (two seats are vacant with nominees currently pending in the Senate) issued recommendations that run the gamut of allowable, requested relief, including increased tariffs, import quotas, import license fees, and domestic industry supports.

While a splintered decision is not unprecedented, the commission’s inability to set forth a uniform recommendation on almost every aspect of the proposed remedy substantially reduced the clarity through the next phase of the process.[1] President Trump has up to 60 days from the date the report issued, or until January 12, 2018, to decide whether to grant relief, and if so, what relief to grant. All four commissioners agreed in the injury phase that imports caused harm to the domestic CSPV industry, but they offered different views regarding how to address that harm and what countries’ imports should be affected by the remedies imposed. Nonetheless, there are some general themes that can be gleaned from the commissioners’ recommendations:

Some of the notable points of disagreement include:

The charts below summarize the various commissioner views on tariffs, quotas, and quantitative restrictions. All commissioners present recommendations for a four-year period, which would require them to conduct a mid-course review under 19 U.S.C. § 2254(a). This review would give the president an opportunity to reduce or terminate relief if the industry has not made adequate efforts to make a positive adjustment to import competition. 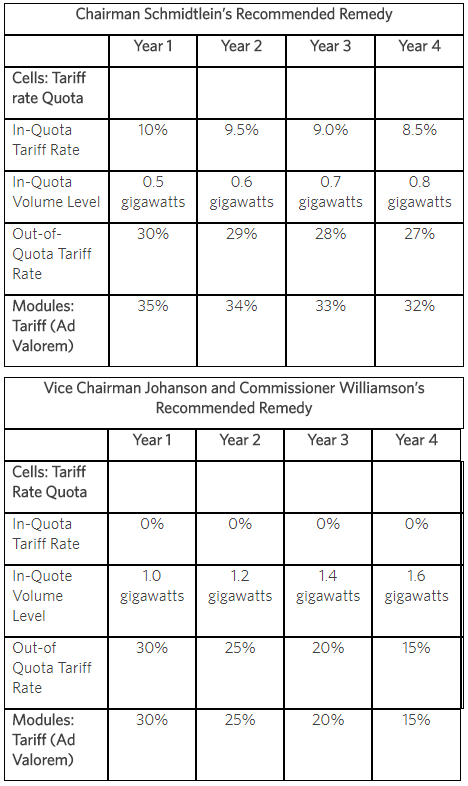 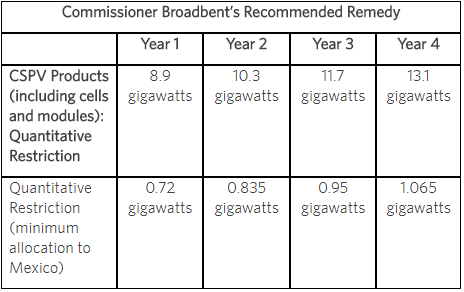 Commissioner Broadbent proposes to administer quantitative restrictions by selling import licenses at public auction with a minimum price of $0.01 per watt and to permit the use of funds generated by the auctions (estimated to be $440 million over the course of the remedy) to provide development assistance to domestic CSPV product manufacturers.

From their public responses to an earlier release of commissioner remedy proposals on October 31, neither side seems particularly pleased. Suniva issued a press release describing the ITC’s recommendations as “disappointing” and “weak” and proclaiming that if the president follows these recommendations, the result will be “the extinction of what remains of this manufacturing sector.” At the same time, the Solar Energy Industry Association, which led the opposition in the ITC, released a statement on October 31 that said in part:

The commissioners clearly took a thoughtful approach to their recommendations and it’s worth noting that in no case did a commissioner recommend anything close to what the petitioners asked for. That being said, proposed tariffs would be intensely harmful to our industry. While we will have to spend more time evaluating the details of each recommendation, we are encouraged by three (3) commissioners’ reference to alternative funding mechanisms, including our import license fee proposal.

Two weeks after the commission’s report, the US Trade Representative (USTR) asked the ITC to provide, pursuant to section 203(a)(5) of the Trade Act, a supplemental report that identifies “any unforeseen developments that led to the articles at issue being imported into the United States in such increased quantities as to be a substantial cause of serious injury.” (Letter of November 27, 2017, from Ambassador Robert Lighthizer to Chairman Schmidtlein. Some have misinterpreted this request as a potential sign that the administration may be seeking information it can use to justify not imposing tariff remedies. A much more likely reason for the request is the need for a finding of “unforeseen developments” under the safeguard provisions of the General Agreement on Tariffs and Trade (GATT). Without an analysis of unforeseen developments, any safeguard remedies could be more vulnerable in a subsequent WTO action. Article XIX(1)(a) authorizes safeguard actions:

If, as a result of unforeseen developments and of the effect of the obligations incurred by a contracting party under this Agreement, including tariff concessions, any product is being imported into the territory of that contracting party in such increased quantities and under such conditions as to cause or threaten serious injury to domestic producers in that territory of like or directly competitive products, the contracting party shall be free.... for such time as may be necessary to prevent or remedy such injury, to suspend the obligation in whole or in part. (Emphasis added).

World Trade Organization (WTO) decisions considering the legitimacy of safeguard actions have made clear that a specific factual finding regarding the “unforeseen developments” requirement is necessary under the GATT before a safeguard action remedy may be imposed. E.g., United States—Safeguard Measures on Imports of Fresh, Chilled, or Frozen Lamb Meat from New Zealand and Australia, AB-2001-1 (Report of Appellate Body at 27-28). Thus, not only is the finding required, but it must be made prior to the imposition of any remedies. By requesting the supplemental report, the USTR has helped to shield any remedies imposed from a later WTO challenge. (The commission’s report did not address the issue of unforeseen developments, likely because it is not required under the Trade Act.)

An immediate impact of this request is to delay the time for the president to act until January 26, 2018. Pending the ITC’s supplemental report, on December 6, 2017, the US Trade Representative’s Office held its hearing in the case. While more than 60 people testified, many were the same persons and entities that appeared before the ITC and many reiterated the same arguments made during the ITC proceedings. The US Trade Representative did not attend the hearing, but the panel that listened to the testimony included representatives from several federal agencies, including the USTR, and the Departments of Commerce, Treasury, State, Labor, and Energy, as well as a representative from the President’s Council of Economic Advisors. Collectively, these agencies will all weigh in on the president’s ultimate decision, so not only has the matter garnered significant attention within the administration, it is also clear that there are significant resources being allocated to the effort.

Several members of Congress also weighed in on the proceedings as well. More participants (foreign and domestic) testified or provided written materials opposing the imposition of tariffs, in particular, which is the greatest point of contention. It remains to be seen whether the vocal opposition will have any impact, as many believe the current administration is predisposed toward increased tariffs. In Washington, DC, a variety of interest groups have also begun a broad advertising campaign hoping to influence the administration’s ultimate decision on tariffs, enlisting famous news and commentator names on their behalf, and running radio and print media ads predicting dire consequences if tariffs are imposed. Some solar industry players have even banded together to create advocacy groups solely to address the safeguard action. Given that the decision now rests squarely with the president, it’s not clear that these efforts will sway the president’s decision.

A second interesting development occurred in mid-October, when a leading domestic manufacturer of solar panels that had previously remained on the sidelines submitted a letter to the ITC in favor of the imposition of safeguard relief, specifically disputing “the notion that [an existing, alternative producer in the US] is somehow an example of why meaningful safeguard relief should be denied to US CSPV producers.” Those comments conclude with the statement that “it is possible to develop a fair and effective remedy that gives US CSPV producers the relief they need without stifling solar's impressive growth,” taking head on the proposition advanced by the respondents that remedies were not needed.

Early Impact Ahead of the President’s Decision

Trade publications and news articles are reporting that the impact of the petition is already being felt, both in terms of higher prices for solar products covered by the petition, and for competing products that some have turned to as an alternative. In addition, large utility projects have reportedly been impacted and/or delayed, such as a Texas solar project that has been put on hold.

Once the president issues his decision, on or before January 26, 2018, the matter can take a few paths, depending upon what he decides. By law, if the president adopts the “Commission’s decision” it is automatically implemented. Exactly what constitutes the “Commission’s decision” may be subject to some debate, but in the end, the president is likely to impose a package of remedies, including both tariffs and tariff quotas. If the president substitutes his own remedies, then Congress has 90 days to overturn that decision. But even then, the result of a congressional resolution would be to reinstate the “Commission’s decision” assuming that can be discerned. Though legal action in the United States is theoretically possible, the difficult standard of review makes such an action unlikely. A WTO action by one of the affected countries is much more likely, especially if the president decides, contrary to the ITC’s recommendation, to include imports from Canada in any remedy imposed. Since a WTO action can only be brought by a country, while such an action would have the support of the same US actors involved in the ITC case, it would be pressed by the affected countries themselves.

Any WTO action would not delay imposition of the remedies, however, and given the broad nature of countries’ right to take safeguard actions under Article XIX, any WTO action would likely be of little assistance, even if it came in time to impact the overall process.

In addition to the requested remedies, the Trade Act authorizes and encourages the president to enter into bilateral agreements with affected countries. Those agreements can act to remove a country’s imports from the safeguard provisions, but generally should take the form of either voluntarily imposed quotas on imports or other, similar actions that obviate the need for the remedies proposed by the president.

January will be a big month for the solar industry as the president’s team mulls the best course of action. Once that decision occurs, there will likely be significant lobbying and potentially even legal action as the opposition continues to fight the likely remedies imposed.