The Interagency Suspension and Debarment Committee (ISDC) recently issued its annual report to Congress on federal government suspension and debarment activities for fiscal year (FY) 2019. Key takeaways from the year’s ISDC report are discussed below.

What is the ISDC Suspension and Debarment Report?

Created by Executive Order 12549, the ISDC is an interagency body “consisting chiefly of representatives from Executive-branch organizations that work together to provide support for suspension and debarment programs throughout the Government.” Section 873 of Public Law 110-417 requires the ISDC to submit an annual report to Congress on, among other things, “the progress and efforts to improve the suspension and debarment system” and “a summary of each agency’s activities and accomplishments in the Government debarment system.”

What are the key takeaways from this year’s report?

As the following chart from this year’s ISDC report shows, federal agencies initiated a total of 3,358 suspension and debarment-related actions in FY 2019 (722 suspensions, 1,437 proposed debarments, and 1,199 debarments). 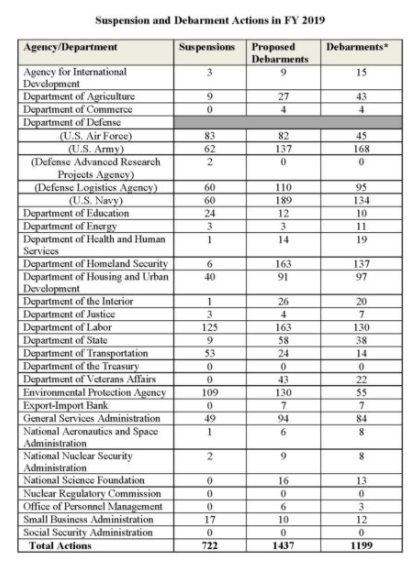 By comparison, in FY 2018, federal agencies initiated a total of 3,356 suspension and debarment-related actions (480 suspensions, 1,542 proposed debarments, and 1,334 debarments).

Moreover, for FY 2019, federal agencies reported issuing 139 pre-notice letters to potential respondents. According to the report, pre-notice letters — “which include show cause letters, requests for information, and similar types of letters” — are “used to inform an individual or entity that the agency debarment program is reviewing matters for potential SDO [Suspending and Debarring Official] action, to identify the assertion of misconduct or the history of poor performance, and to give the recipient an opportunity to respond prior to formal SDO action.” As a point of comparison, federal agencies reported issuing 197 pre-notice letters in FY 2018.