Evicting cybersquatters: what to do when someone registers your brand as a domain name

For both domestic and international domain names, there are fairly efficient and effective ways for brand owners to secure domain names that have been wrongfully registered.

"Cybersquatters" are the kidnappers of the Internet – faceless beings who register domain names for well known brands in the hope that one day, one of those brands will come knocking and pay big bucks to secure the domain name. But it doesn't have to be this way. Like the Liam Neeson character in Taken, brand owners have options available to them where someone has wrongfully registered their brand as a domain name, which could avoid the need to pay ransom for what is rightfully theirs.

International domain names (such as .com, .info and .org domain names) are subject to the Uniform Dispute Resolution Policy (UDRP). Brand owners who wish to have another party's international domain name cancelled or (preferably) transferred to them can submit complaints under the UDRP to various accredited international dispute resolution bodies. Most disputes are submitted to the World Intellectual Property Organisation (WIPO), a species of the United Nations. Other accredited dispute resolution providers include Forum (formerly the National Arbitration Forum, based in the United States) and the Asian Domain Name Dispute Resolution Centre (a joint initiative of the China International Economic and Trade Arbitration Commission and the Hong Kong International Arbitration Centre).

To succeed under the UDRP, the Complainant must establish that:

The Complainant seeks to establish these matters by way of a written Complaint, to which the Respondent may (if it so wishes) submit a written Response.

The entity which determines the domain name disputes is known as the Panel, and consists of one or three members. In the vast majority of cases, the Panel decides the case based on the Complaint and the Response alone. In some cases the Panel, at its discretion, will consider parties' supplemental submissions. Cancellation or transfer of the domain name are the sole remedies provided to a successful Complainant under the UDRP.

In normal circumstances, an action under the UDRP will be resolved in about six to eight weeks. 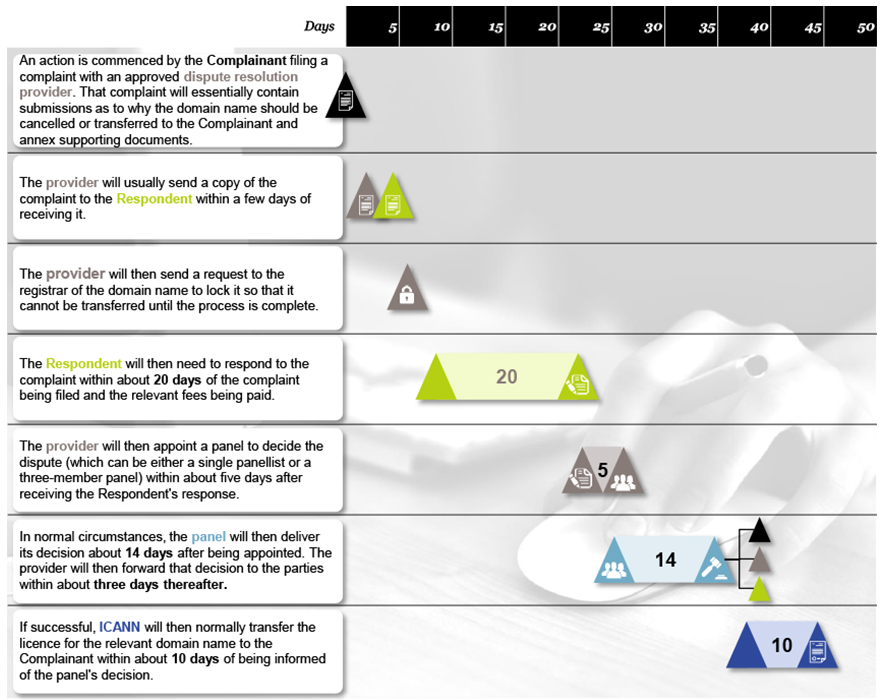 File a complaint under the .au Dispute Resolution Policy

Australian domain names (such as .com.au, .info.au and .org.au) are subject to the .au Dispute Resolution Policy (auDRP). auDA has approved WIPO and the Resolution Institute to determine domain name disputes submitted under the auDRP.

To succeed, the auDRP requires a Complainant to establish that (with the differences to the UDRP shown in "revision marks"):

As readers will appreciate, these differences – albeit subtle – can be very significant in determining whether a complaint is upheld or denied. The process is, however, broadly similar to that under the UDRP. 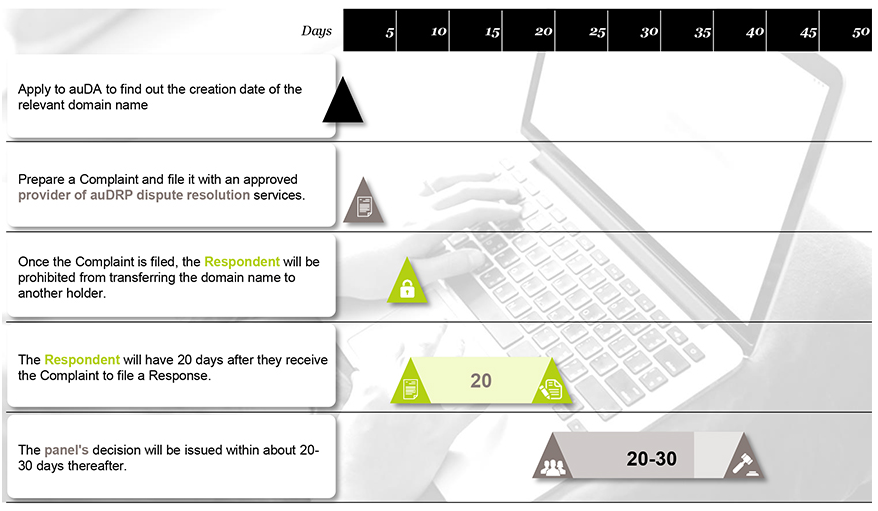 File a complaint in relation to eligibility

Where a person does not comply with these policies, it is possible to file a complaint with auDA or the registrar of the domain name (depending on the nature of the complaint).

One way brand owners can stop other third parties registering the domain name once it is cancelled following this process is by engaging the services of a drop catching service. This service allows people to lodge a pre-application for a domain name before it is due to drop (ie. become available), and then uses a special software program to attempt to catch the domain name at the registry as soon as it drops. However, there is always a risk that another party has engaged a similar service and registers the domain name before the brand owner.

How do you decide which option to use?