The Draft Bill represents a glimpse of the potential amendments to the Safeguard Mechanism.

The Safeguard Mechanism is a mandatory decarbonisation framework introduced in 2016 with the aim to reduce Australia’s national greenhouse gas emissions.

The Safeguard Mechanism sets limits on net direct (Scope 1) CO2-e emissions – called baselines– that certain Australian industrial facilities must meet by reducing their operational emissions and offsetting any remaining emissions through the purchase and surrender of carbon credits.

Currently, the Safeguard Mechanism only applies to Australian industrial facilities that release at least 100,000 tonnes of Scope 1 emissions per annum. In practical terms, this equates to coverage of approximately 215 firms. These firms are spread across all sectors of the economy and accounted for around 28 per cent of Australia’s total greenhouse gas emissions between 2020 and 2021.

The reforms aim to gradually reduce Safeguard Mechanism baselines at indicative decline rates of 3.5 to 6 per cent each year and thereby force abatement activities to occur. As a precursor, the Australian Government sought general feedback from industry on a number of key changes proposed in its Consultation Paper, including:

As baselines decrease, it can be expected that pressure will increase on carbon markets as facilities unable to adequately reduce their Scope 1 emissions look to purchase and surrender carbon credits to comply with more stringent targets.

In order to incentivise facilities cutting back their operational emissions as much as possible, the Government will introduce new SMCs, which will automatically be credited to facilities in proportion to how far their emissions fall below the baseline. 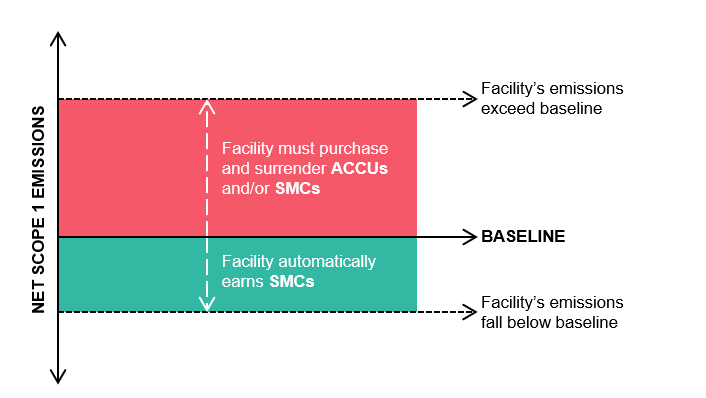 The Draft Bill makes it clear that SMCs will be subject to the same rules as ACCUs in respect of their registration, transfer and surrender.

The Consultation Paper suggests that only domestic carbon credits (ie, ACCUs and SMCs) will be eligible for use under the Safeguard Mechanism. This means that voluntary international carbon credits, such as those issued by non-government bodies like VERRA and Gold Standard, cannot be used towards baselines. However, this policy may change as international carbon trading markets, including for example that proposed under the Indo-Pacific Carbon Offsets Scheme, become more developed and robust.

It is unclear at this stage how the independent review of ACCUs, currently being led by Professor Ian Chubb in response to public concerns regarding the integrity of ACCUs, may affect the reforms.

Consultation on the Draft Bill was only open for a short time and has now closed.

However, Australian companies whose facilities currently fall within the Safeguard Mechanism scheme — or who are likely to be subject to the regime in the future — may still wish to provide feedback, and consider options to meet indicative decline rates in the coming years.

The potential reforms will play a crucial role in the Australian Government’s strengthened commitment — now reflected in a suite of national environmental legislation following the recent passing of the Climate Change Act 2022 (Cth) and accompanying Climate Change (Consequential Amendments) Act 2022 (Cth) — to reduce national emissions by 43% below 2005 levels by 2030, and achieve net zero emissions by 2050.