Two years after MiFID II and MiFIR started to apply, the MiFID review process has begun, with both the European Commission and the European Securities and Markets Authority (ESMA) having recently published consultations on the framework.

The European Commission has launched a public consultation on the review of the MiFID II/MIFIR regulatory framework. This consultation uses a questionnaire format divided into two main sections. The first section covers general questions on the overall functioning of MiFID II/MiFIR, with the second section covering specific questions on “priority” and “non-priority” topics (see below).

The deadline for responses is 20 April, with the Commission intending to publish legislative proposals in H2 2020.Given the current political landscape, it may be unsurprising that the consultation suggests strong influence from German and French regulators.

Given the uncertainties of Brexit and the many deadlines set within MiFID II and MiFIR, ESMA wrote to the European Commission in March 2019 with a proposal to postpone the due dates for ESMA’s reports on MiFID II/MiFIR by between 6 to 24 months. ESMA finally published its first MiFID II/MiFIR review report in December 2019. The report, on the development in prices for pre- and post- trade market data and the consolidated tape for equity instruments, fed into the European Commission’s review and informed its consultation on the MiFID II/MiFIR framework (see above). 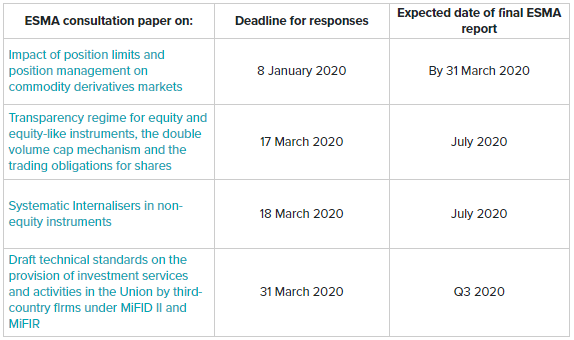 ESMA will be providing advice to the European Commission on other aspects of MiFID II/MiFIR over the coming months (with the last report due in January 2022), including the transparency regime for non-equity instruments, transaction reporting, algorithmic trading, the trading obligation for derivatives, SME growth markets and the functioning of organised trading facilities.