The CRA Revamp is Here: Was it Worth the Wait?

Just in time for the holidays, the Office of the Comptroller of the Currency (OCC) and the Federal Deposit Insurance Corporation (FDIC) issued a joint proposal (Proposal) on December 12, 2019, to completely revamp how the agencies will assess banks' performance under the Community Reinvestment Act (CRA). It is a doozy. Among other changes, the Proposal (i) expands the concept of assessment area (AA) to include geographies outside of a bank's current AAs and in which the bank receives at least 5 percent of its retail deposits and (ii) introduces a series of objective tests for determining a bank's presumptive CRA rating. The Proposal will be most noteworthy for banks with at least $500 million in total assets and with significant retail deposits sourced outside of their current AAs. Community banks with less than $500 million in total assets will have the option to continue to be assessed for purposes of CRA using the current small bank performance standards. Comments on the Proposal are due within 60 days of publication in the Federal Register, but in no event earlier than February 10, 2020.

In the 1960s and 1970s Congress passed several laws addressing consumer protection and fairness and access to housing and credit. CRA was one of these laws. Unlike other laws that prohibit certain types of activity (e.g., the Equal Credit Opportunity Act prohibits creditors from discriminating against an applicant on the basis of race, color, religion, national origin, etc.) the CRA was designed to encourage (rather than require) sound lending to all areas of a bank's community. The CRA accomplishes this goal by requiring the banking agencies to consider a bank's CRA activity when ruling on banking applications. Banks that fail to conduct sufficient CRA activity may be prohibited from merging, opening a branch or engaging in other expansionary activities.

The banking agencies have implemented the CRA through interagency regulations that set forth several evaluation methods for institutions of different sizes and business strategies. Current CRA regulations require a bank to delineate one or more geographic AAs within which a bank's regulator will evaluate a bank's record of meeting the credit needs of its community. AAs for retail banks must include geographies in which a bank has its main office, its branches and its deposit-taking automated teller machines, and the surrounding geographies in which that bank has originated or purchased a substantial portion of its loans.

Over the last decade, community groups, the banking industry and various other stakeholders have called for comprehensive changes to the CRA regulatory framework in response to changes that have occurred in the banking industry and economy since the CRA regulations were last updated in 1995. In 2014, the banking regulators conducted a public decennial review of their regulations, as mandated by Congress. In 2017, the banking regulators issued a report to Congress that included a summary of the public comments received during the three-year period with respect to CRA reform.1 In 2018, the US Department of the Treasury also issued recommendations to modernize the CRA regulations.2 Also that year, the OCC issued an Advance Notice of Proposed Rulemaking on CRA that reflected input from the FDIC and the Board of Governors of the Federal Reserve (the Board).3 The OCC received more than 1,500 comments from the public and shared those comments with the FDIC and the Board.

To improve the current CRA regulatory framework and promote increased lending and investment, the FDIC and OCC propose to make changes in four key areas:

1. Clarifying and expanding what qualifies for CRA credit;

3. Providing an objective method to measure CRA activity; and

A. Clarifying and Expanding What Qualifies as CRA Credit

B. Expanding Where CRA Activity Counts

Under the current framework, a bank's CRA performance is generally measured within the bank's AAs, which are generally limited to where the bank has a main office or branch. The Proposal correctly notes that this method of delineating AAs "is challenged by how today's consumers meet their banking needs and banks provide services." Therefore, the agencies are proposing to create two categories of AAs:

1. Facility-based assessment areas. This category of AA is generally the same as the current definition of an AA.

The current CRA regime provides different methods for evaluating a bank's CRA performance depending on the bank's asset size and business strategy. According to the Proposal, "[b]ecause of the subjective nature of the current framework, exactly how an agency determined the appropriate rating is at times opaque, complex, and inconsistent." To address this problem, the Proposal includes a set of "genera performance standards" (GPS) that would be used to evaluate banks that are not small banks.

Under the GPS, banks would be evaluated in each AA under three benchmarks: (i) the CRA Evaluation; (ii) Retail Lending Distribution Tests; and (iii) Community Development (CD) Minimums. Generally, a bank would receive an overall bank-level rating and a separate rating for each AA. The charts below illustrate possible ways to achieve each presumptive ratings category associated with each of the three benchmarks in a given AA and overall. 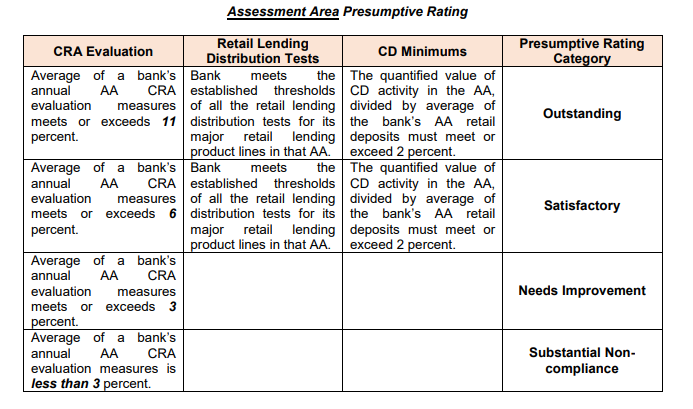 Small banks (defined generally as banks with less than $500 million in total assets) that do not elect to opt in to the GPS framework (or elect to be evaluated pursuant to a Strategic Plan) would be evaluated under the existing CRA performance standards applicable to small banks. This would enable small banks to continue to be assessed under the CRA performance standards with which they are already familiar. The Proposal also retains the option for a bank to select to be evaluated under a Strategic Plan.

The regulators would retain the discretion to adjust the presumptive CRA ratings based on certain performance context factors as well as any evidence of discriminatory or other illegal credit practices. It is unclear from the Proposal how often these considerations might overrule a presumptive CRA rating.

Given the complexity of the presumptive CRA calculations and the associated data collection, recordkeeping and reporting requirements, we believe the majority of community banks under $500 million in total assets will determine that it is in their best interests to continue to be evaluated under the existing CRA small bank performance standards.

For banks over $500 million in total assets, the primary issues will likely be the following:

Overall, the Proposal offers a greater degree of objectivity to CRA evaluations in exchange for a substantial investment by a bank on the front end in setting up the systems to monitor and track Qualifying Activity. Whether this trade-off will be worthwhile remains to be seen. For a longer summary of the Proposal, please contact the author.