In the everchanging business environment, business owners’ exploration in terms of using and registering non-traditional trademarks, such as 3D trademarks, sound trademarks, color trademarks and position trademarks, has never stopped. Different jurisdictions may have different thresholds to assess registrability of non-traditional marks. In China, there has been a noteworthy development regarding single-color mark used on a particular position filed by Christian Louboutin.

In China, this mark has gone through refusal, review on refusal, first instance court proceeding, and the second instance judgment was just issued by Beijing High People’s Court (BHPC) in December 2018.

This BHPC judgment receives great attention in the China IP community and is viewed as a staged victory for Christian Louboutin. It identified Christian Louboutin’s trademark is essentially a single-color mark, the placement of which is specific, and it acknowledged for the first time this kind of mark is trademarkable under Art. 8 of the Trademark Law.

To understand significance of BHPC’s judgment and its implications, we should first review Christian Louboutin’s international trademark specifications and Art. 8 of the Trademark Law.

Art. 8 of the Trademark Law stipulates: any sign, capable of distinguishing the goods or services of one natural person, legal person or any other organization from those of other persons, including words, devices, letters, numerals, three-dimensional signs, combination of colors, sounds, etc., as well as the combination of the above elements, shall be eligible for application for registration as a trademark. There is no mentioning whether single-color marks or position marks are trademarkable. Therefore, trademark examiners and courts have been prudent and rejected various parties’ attempt to register single-color marks or position marks, until this BHPC judgment.

WIPO records specification of Christian Louboutin’s international mark as: “information concerning colors claimed: Red - Pantone number 18.1663TP. The mark consists of the color red (Pantone No. 18.1663TP) applied to the sole of a shoe as shown in the representation (the outline of the shoe is not part of the mark but is intended only to show the placement of the mark).” 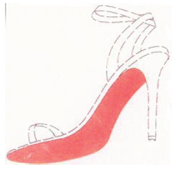 TRAB first viewed the red-sole mark as a normal figurative mark and refused this application for lacking distinctiveness. In the first instance, Beijing IP Court included the high heel shoe shape as part of the mark composition and determined that TRAB should review distinctiveness of this mark as a 3D trademark.

BHPC’s judgment is not the end for Christian Louboutin, and it does not settle the debate on the evidentiary thresholds for acquired distinctiveness of non-traditional trademarks. Nevertheless, BHPC taking a more liberal approach to interpret Art.8 of the Trademark Law is already a breakthrough. It also opens a door for business owners to pursue trademark registration protection of non-traditional trademarks with sufficient distinctiveness.

A practical lesson to take away is to make and insist on accurate specifications while applying for non-traditional trademarks, as Christian Louboutin did. It might become possible one day to register single-color mark without specifying the position to be used or register pure position marks without a particular color. However, for the time being, the chances of successful trademark registration may be better if applicants specify both the position the mark will be used and the color element, provided that distinctiveness is well proven.