Dealmaking and buyout firms helped break a number of dealmaking records down under, with resources, technology/telecommunications and infrastructure featuring strongly

Australian M&A continued to perform strongly through 2018, with the total value of M&A deals at US$88.5 billion (AU$123.1 billion) surpassing 2017’s already robust US$85.6 billion (AU$119.1 billion) total and becoming the second-highest total deal value over the past decade. Deal volume by number of transactions reduced slightly, from 618 in 2017 to 583 last year, although the overall trend in the past ten years has been upwards—in 2008, there were just 375 deals. 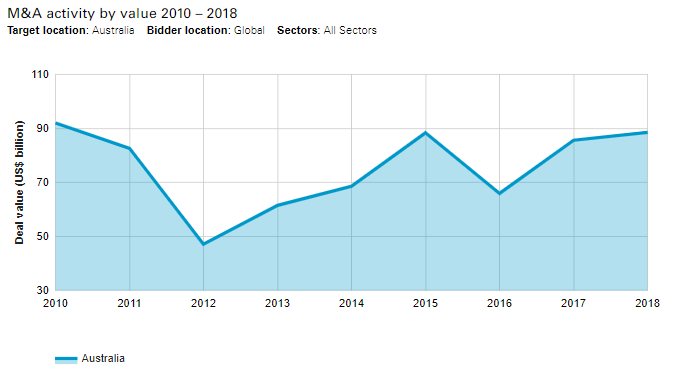 Activity was driven by a number of factors, from increased interest among private equity investors to the depreciation of the Australian dollar, which flattered Australian deal pricing at a time of elevated valuations globally. Australia’s currency, already low at the start the year, fell further against the US dollar and euro as 2018 progressed—with a 13% drop versus the US dollar from January to December.

The second half of 2018 was particularly strong for Australian M&A, accounting for 71% of the year’s total deal value, or US$62.9 billion (AU$87.5 billion), and bucking the global trend, where H2 2018 saw deal values fall sharply. Indeed, eight of the top ten deals by size in 2018 were announced in the second half of the year, led by the year’s largest deal—the demerger of Coles Group food and liquor retail operations from Wesfarmers, which opened on the Australian Securities Exchange (ASX) with a value of US$12 billion (AU$16.6 billion). The deal brings Coles back to the ASX as a standalone business since being taken over by Wesfarmers in 2007.

The second-largest deal of the year—also announced in H2 2018—was the US$6.7 billion (AU$9.3 billion) sale of a 51% stake in road project finance and delivery business Sydney Motorway Corporation by the New South Wales government. Winning bidders were a consortium of domestic investors—Transurban Group and AustralianSuper—plus overseas institutions Canada Pension Plan Investment Board and Abu Dhabi-based Tawreed Investments.

Regulatory impacts on Australian M&A: here to stay in 2019?

The year 2018 marked a continued increase in regulatory involvement in all parts of the Australian economy, which had an impact on M&A transactions.

Foreign investment approvals continued to grab headlines, in particular the Federal Government’s refusal to approve the US$9.4 billion (AU$13 billion) bid by Hong Kong’s CK Group for gas pipeline operator APA Group. While the overwhelming majority of inbound investments are approved by FIRB, the perception of increased scrutiny of foreign-backed M&A cannot be underestimated. With a federal election on the horizon, 2019 is expected to bring a heightened level of community and political scrutiny to inbound M&A. While there is no evidence to indicate that approvals will be withheld, increased levels of inquiry in the process of obtaining approvals and the potential for deal timetables to be impacted as a result remain likely.

The Banking Royal Commission has brought about major upheaval and review in Australia’s financial services sector. Along with other regulatory and industry changes over the years relating to the sector, the upheaval has contributed to significant M&A activity in the financial services sector in Australia, with a number of the major banks undertaking major M&A transactions. A primary example is CBA’s sale of its wealth management arm Colonial First State to Mitsubishi Financial. With ASIC, APRA and the ACCC all under increased pressure to deliver regulatory outcomes, the impact of increased regulatory involvement on the Australian economy, and with it Australian M&A transactions, certainly seems here to stay in 2019.

ACCC and competition concerns have also made their impact felt in 2018. Examples include consideration by the ACCC of the proposed US$10.8 billion (AU$15 billion)—based on pro forma enterprise value—merger between Vodafone Hutchison Australia and TPG Telecom (delayed to Q1 2019), the conditional competition approval of Saputo’s acquisition of Murray Gouldburn’s operating assets and the highly publicized competition approval process for the acquisition of Westconnex. With the reappointment of Rod Sims as chair, the ACCC’s increasingly interventionist approach to merger approvals and competition issues seems likely to continue in earnest in 2019.

Australia’s significant natural resources and attractive energy and utilities sector resulted in energy, mining & utilities (EMU) M&A once again topping the list of sectors by value, as it has for nine out of the last ten years. There were US$21.3 billion (AU$29.6 billion) deals announced in the sector during 2018, including:

For 2019, the gold sector is expected to generate M&A activity as Australian companies chase growth in the face of global mergers and an ongoing strong gold price. The China slowdown and the outcome of China-US trade tensions will ultimately determine the level of activity in the sector this year.

In line with trends globally, TMT saw significant deal activity in 2018 in Australia. Deal values were up to a decade-high US$12.9 billion (AU$17.9 billion), a substantial jump from the previous year's US$3.9 billion (AU$5.4 billion). Notable transactions included:

The consumer sector also had a strong year, with US$16.7 billion (AU$23.2 billion) of deals announced in Australia during 2018, a threefold increase on the previous year, led by Wesfarmers’ spinoff of Coles. There are economic indicators that 2019 could bring continued transaction activity in 2019.

On the upside, Amazon’s entry into food and groceries in Australia seems yet to have had the seismic impact initially expected, and Australia remains an attractive consumer market. The nation moved into the top spot for the highest median wealth per adult globally (with AU$266,255 median per adult) according to Credit Suisse’s Global Wealth Report, beating Switzerland (AU$254,976), which could make Australian retail targets attractive to foreign buyers. On the downside, with disappointing GDP growth figures (2.8% for the year to September 2018, according to the Bureau of Statistics, well below forecasts of 3.5%), the resilience of the consumer sector may be tested through 2019, which may lead to some consolidation opportunities.

Strong offshore interest in Australian assets continued in 2018, with 255 Australian deals announced by overseas buyers, valued at US$37.7 billion (AU$52.4 billion). While this may be seen as a sharp decrease from US$61.3 billion (AU$85.3 billion) across 254 deals in 2017, the 2017 figure was largely driven by the US$24.7 billion (AU$34.4 billion) scrip merger between French group Unibail-Rodamco and shopping mall operator Westfield Corp., suggesting that actual cash-driven inbound M&A remained strong in 2018.

In 2018, US investors were the most acquisitive inbound buyers, announcing 83 deals worth an aggregated US$9.6 billion (AU$13.4 billion). Japan was in the second spot, with a value of US$6.2 billion (AU$8.6 billion) across 21 deals, including the ongoing acquisition of Colonial First State Global Asset Management for US$3 billion (AU$4.1 billion) by Mitsubishi UFJ Trust and Banking Corp.

Last year saw the highest amount invested in Australian private equity deals on record. In 2018, there were 93 deals involving private equity worth US$25.4 billion (AU$35.3 billion), comfortably beating the previous peak of US$21.3 billion (AU$29.6 billion) in 2015, when 64 deals were announced. Private equity-driven M&A is expected to continue in 2019 as funds with cash to deploy seek out assets.

The following are examples of private equity deals that are already unfolding in 2019:

A recent Deloitte survey found that nearly one-third of US private equity respondents (29%) identified Australia as one of the top five overseas markets for investment, up from 24% a year earlier.

As a market strongly linked to China, Australia could also be affected by any worsening of trade relations between the US and China. Increased US interest rates may also affect the Australian economy should capital flowing away from emerging markets and back to the US affect Chinese growth. In addition, any perception of difficulty in obtaining foreign investment approvals (or lack of clarity about the decision-making process) may deter some overseas buyers, notably those in China seeking to acquire assets in the EMU sector—long Australia’s most active area for M&A.

However, absent a major global shock, Australia’s M&A activity looks set to remain steady over the next 12 months or so. Executives in the market are confident: An unprecedented 99% of those surveyed in Australia and New Zealand for EY’s Capital Confidence Barometer expect the local M&A market to remain stable or improve, and more than half (53%) are planning to actively pursue M&A during 2019.

This activity will be buoyed by rising interest from private equity firms, particularly those in the US. Joining them are likely to be the country’s superannuation funds, which are becoming more active in M&A, the most obvious example being Australian Super’s consortium arrangements with domestic private equity firm BGH Capital. Together, they have recently participated in proposals for private hospitals group Healthscope and for education business Navitas.

This type of arrangement could have a major effect on domestic deals as super funds are a local source of significant capital—they have a combined US$2 trillion (AU$2.8 trillion) under management.