The on-going scuffle for the trademark “Glow and Handsome”

Owning a famous Trademark is an integral part of any business. Trademarks help in instant recognition of the product and have ascendancy on people’s mind. Companies tend to bank on the goodwill earned by these marks for improving their sales. The examples for it include “Johnson Baby’s” by Johnson and Johnson, “Dettol” by Reckitt and Benckiser, and so on. Corporate giants earned recognition in the market, because of their trademarks.

The idea of these famous marks being misused or being inculpated against cannot be ignored. The popularity of the mark invites close competition for being misused because of the goodwill it earns. Companies fight these oppositions tooth and nail as their profitability depends on it. It is with this background, the on-going battle of Hindustan Unilevers and Emami is analysed.

Background of the case

Hindustan Unilevers (HUL) is a multinational company that owns some of the famous Trademarks in the market. Their trademarks include “Lipton Ice tea”, “Rin” detergent and bleach, “Dove” skincare products, and more. They are also the owners of the famous trademark of “Fair and Lovely” the popular skin cream.[ https://www.hul.co.in/] Recent events that sparked up the debates regarding racial discrimination led to the corporations taking a solemn step on their behalf to ensure their brands are less discriminatory. It was on this context that HUL also took the task of retitling their brand “Fair and Lovely” to “Glow and lovely” and “Fair and lovely for men” “Glow and handsome for men”.

However, this change was not welcomed by the competitors. One of their main competitors Emami had just rebranded their products to “Glow and Handsome” and launched the brand a week before HUL, on all digital platforms.

The bone of contention between the brands began in the early 2000s. Conversely, the matter aggravated when HUL applied for the recognition of their trademark “Glow and Handsome for men”. The trademark registry refused to recognize the mark due to its non-distinctiveness. HUL failing to back down appealed at the IP Appellate Board.

While the matter is pending before the court, HUL ensured to keep increasing the reputation of their brand. They received ample threats from Emami on this matter. To avoid problems they sought an Ad-interim injunction against Emami, and the Single Judge ruled that Emami is to give 7 days prior notice before they initiate any action against HUL on this matter. 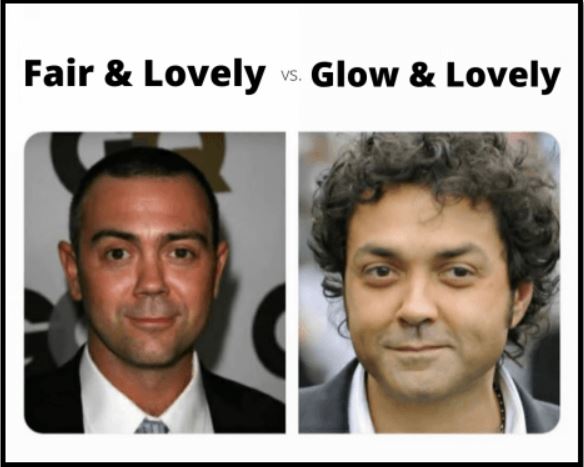 [ Hindustan Unilever Ltd v Emami Ltd (17th August 2020.)] On the 17th of August 2020, HUL approached the Bombay High Court for another injunction. The Bombay based conglomerate requested the High court to issue an injunction against Emami to restrain them from using the mark “Glow and Handsome”.

The request for this injunction has placed the on-going fight into a new realm of events. HUL pointed out that their brand name “Fair and lovely” had contributed to a fair share of their sales in the past year. The figures for their sales were also produced as a part of their documentation. In the year 2019-2020, they had a turnover of 2400 crores. It was on this pretext that they intended to gain reputation for the mark “Glow and Handsome”. When HUL applied for the registration of the mark they also sort for FDA approval. The said approval came on 2nd August 2020.

The reaction of Emami was not well received. They posed a potential threat to the HUL’s working and hence HUL approached the court with the present petition for the said injunction.

The matter was heard by Justice Gupte. He analysed the situation in two parts. Firstly the issue relating to the previous injunction was addressed. The previous injunction had stated that there ought to be a 7 days’ notice given by Emami to HUL before taking any action. The court decided affirmative on the said issue. The second issue addressed by the court was concerning the request for the present injunction restraining Emami from the use of the mark “Glow and Handsome”.

After due care and consideration of the arguments presented to the court, his lordship made the following observations: Firstly, Emami has already filed the matter of infringement by passing off at the Calcutta High Court, hence the case relating to that will be dealt with by the Calcutta High court and not this court. The subject matter demarcation was drawn. His lordship ensured that this order will in no way affect the proceeding that is likely to happen in the Calcutta High Court.

Secondly, the injunction was granted in favour of HUL, which is restraining Emami from the use of the Trademark, “Glow and Handsome”. It was reasoned with the point that the brand has gained sufficient popularity in the past, and if products of the same class are sold under similar names it is likely to create confusion among the public. The judgment was concluded by giving Emami two weeks to file for the reply and the matter will be reconsidered in 5 weeks. The Calcutta High Court has decided to hear Emami’s case on the first week of September 2020.

The on-going battle for the trademark “Glow and handsome” has picked up new momentum. The decision regarding the rightful owner of the mark is still being adjudicated in courts. We’ll ensure to keep everyone up-to-date regarding the trademark battle. Stay tuned to our blogs to know more about the case.