In the last year, we have seen a steady growth in healthcare M&A transactions. The high rate of deals we saw throughout 2018 carried over into the first quarter of this year, with the number of deals exceeding $20 million increasing every quarter and approaching 500 in Q1 2019. (See figure 1.) 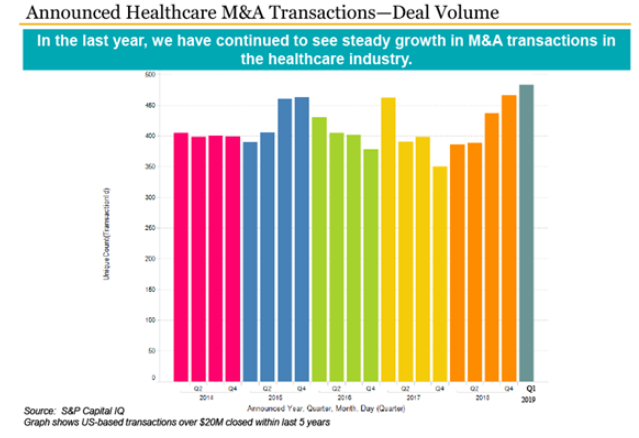 In contrast, deal value took a dip in 2018, particularly in the last two quarters of the year. Deal value peaked in March of 2018, when Cigna announced its acquisition of Express Scripts, but then took a precipitous plunge. It has bounced back in the first quarter of 2019, with the rise fueled by large deals announced and closed in the long-term care and pharmaceutical sectors. (See figure 2.) 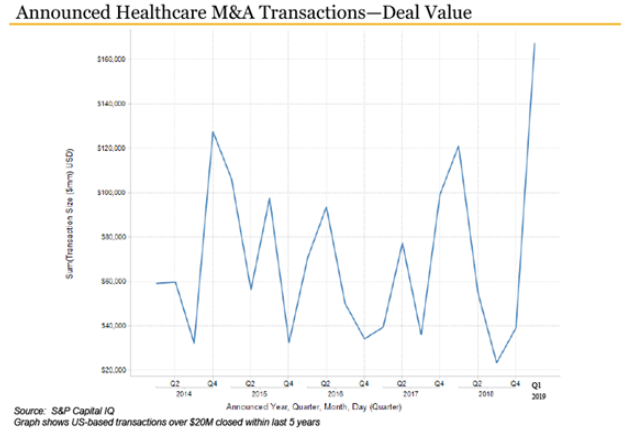 In addition, digital health M&A volume is showing high growth, more than tripling in the last five years, from 17 in 2013 to 54 in 2018—the highest volume of digital deals ever completed in one year.2 The increase in deals is driven by a maturing market for large pharmaceutical companies and tech giants that are seeking to expand by getting a foothold in digital health through buying startup solutions.

The big digital deal everyone was talking about last year was Amazon’s purchase of Pill Pack for $1 billion. Pill Pack is a mail order company with drug distribution and pharmacy licenses in multiple states—and it recently applied for licenses in a string of additional states. It gives Amazon a way to fill prescription orders quickly. On its web site, Pill Pack says that its mission is to become the earth’s most customer-centric pharmacy.

Best Buy also reached into the healthcare space last year with its $800 million purchase of Great Call. Focusing on the growing over-65 population seeking to lead independent lives, Great Call provides connected health and emergency response services for seniors who can push a button if they’ve fallen or need help.

Last year also saw a number of major nonprofit mergers. Notably, many of these mergers went beyond the parties’ home markets and crossed state lines. For example, Advocate Health Care and Aurora Health Care combined to create a 27-hospital system with $11 billion in revenue, and Bon Secours Health System joined with Mercy Health in September 2018 to form a 43-hospital system with $8 billion in revenues. Atrium Health and Navicent Health joined together in January 2019—and that same month, Dignity Health merged with Catholic Health Initiatives (CHI) to form Common Spirit, a system that now has 142 hospitals and $29 billion in revenue.

We’ve also seen a significant number of health plan deals closing over the last year. In September 2018, WellCare closed its deal to acquire Meridian for $2.5 billion. Everyone is now curious to see what will happen after Centene’s announcement in March 2019 of its planned $17.3 billion acquisition of WellCare. Both entities focus on government plans, making this a very interesting deal to watch.

In March, we also saw the announcement that Cambia and Blue Cross Blue Shield of North Carolina, the two major Blue insurers, also are combining resources in a strategic alliance. Though this is not a merger or acquisition, the two insurers plan to share management, administrative, operational and other corporate services under the Cambia Health Solutions name.

The Continued Rise of Vertical Integration

The big headline in M&A news for 2018 was the increasing vertical integration in the health plan space. Companies are merging with others up and down the supply chain, including pharmacy benefit managers (PBMs), pharmacies and providers. The vertical activity has caught the attention of the Federal Trade Commission (FTC), with the two Democrats on the five-member commission (Rebecca Kelly Slaughter and Rohit Chopra) pressing for increased scrutiny of vertical mergers. Though the Democrats are the minority, their concerns could mean longer and more costly investigations, even for deals that the FTC ultimately clears.

The major vertical integration deals over the last year include:

One of the biggest trends impacting healthcare M&A in 2019 is the focus on redesigning care around consumers. Consumer-centric care stresses providing affordable care with transparent pricing. It also includes using data more effectively to improve quality and outcomes, such as through personalized medicine or interoperable data exchange.

Other major trends include: